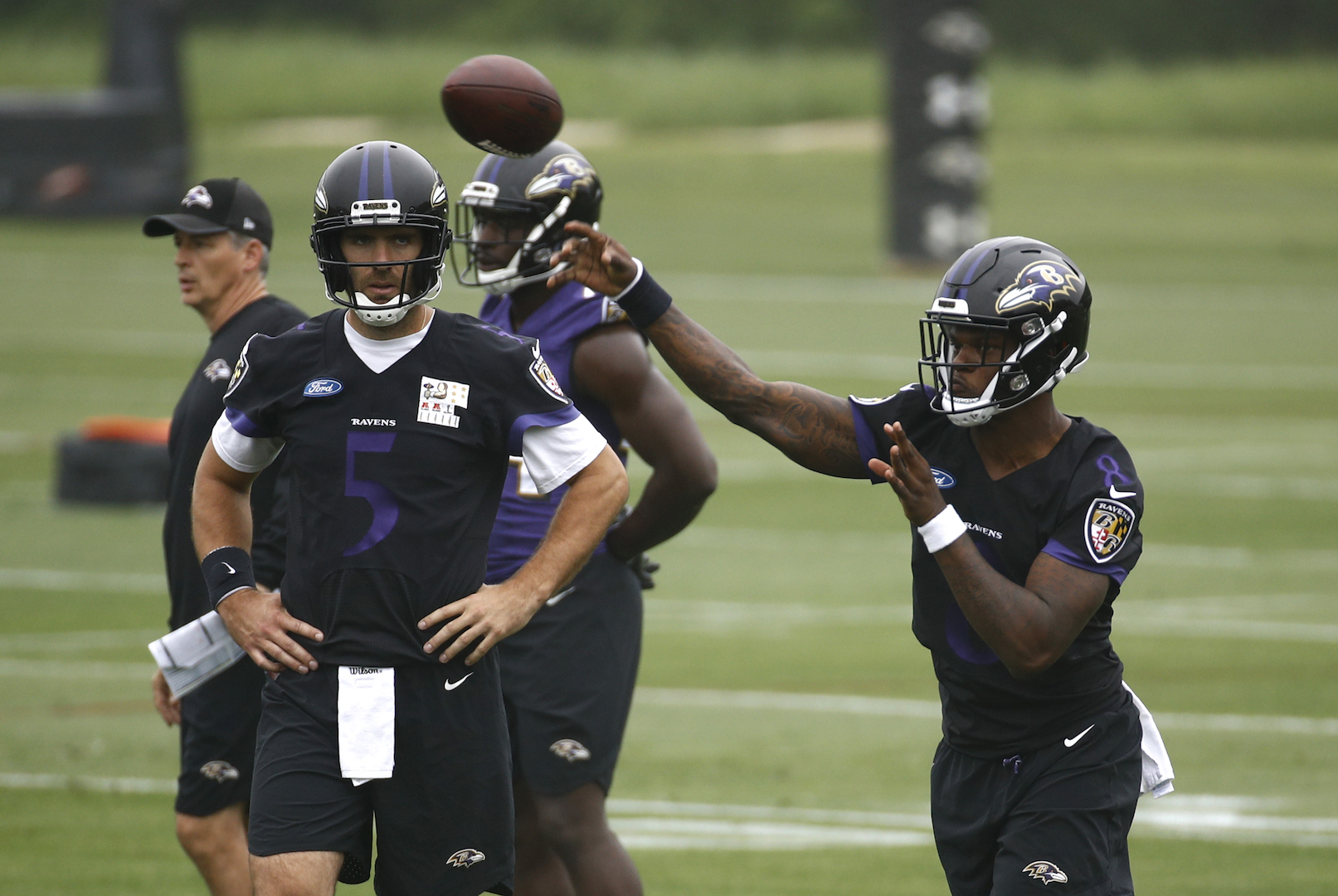 Who Has A Better Long-Term Fantasy Outlook: Josh Allen Or Lamar Jackson?


People can say what they want about Josh Allen and Lamar Jackson as NFL quarterbacks, but they each have a trait that cannot be denied: sky-high potential.

This week, both rookies have been hyped up by teammates, with Allen earning high praise from LeSean McCoy and other teammates, and Jackson being compared to “a young Michael Vick” by C.J. Mosley. However, playing time isn’t guaranteed for either signal-caller this year, so fantasy owners—particularly in dynasty leagues—will likely be looking ahead to 2019 and beyond for them to significant impact. So, which one has the edge when it comes to long-term fantasy outlook?

The case for Josh Allen

Buffalo doesn’t have a great group of receivers, so let’s just get that out of the way. Kelvin Benjamin will be a free agent after the season and could be allowed to walk if he doesn’t have a strong showing in his first full year with the team, Zay Jones needs to make substantial strides to live up to his draft billing as a second-round pick, and there aren’t any high-upside options behind them.

Plus, LeSean McCoy turns 30 in less than a month, and he’s handled a ton of touches since entering the league. By this time next year, we could see a completely revamped offense (personnel wise), which might make projecting for Allen a bit more difficult. That said, any changes made—particularly at wide receiver and tight end—would likely be welcome changes.

As far as the coaching staff in place for Allen, head coach Sean McDermott is obviously going to be around for a while after guiding Buffalo to the playoffs for the first time this millennium in his first season. McDermott will mostly handle the defensive side of the ball, though, so new offensive coordinator Brian Daboll is key for Allen.

Daboll has bounced around some over the past two decades, but he was in New England for all five Super Bowl wins, mostly working as wide receivers coach (2002-2006) or tight ends coach (2014-2016). More recently, the 43-year-old coordinated Alabama’s offense in 2017, which ended with a national championship.

If you haven’t figured it out by now, Daboll has a pretty accomplished resume, and I think he will bring the best out of Josh Allen. Still, it comes down to the quarterback himself, but he has all the tools to be an elite player—and perhaps quicker than critics imagined.

Remember back in 2011 when Cam Newton was “inaccurate” and “unpolished” coming out of Auburn? All he did was set the rookie record for passing yards (4,051) with 21 touchdowns and 17 interceptions, not to mention 706 rushing yards and a whopping 14 scores on the ground.

Allen is facing some of the same questions Cam did, but he’s a Newton-like six-foot-five, 237 pounds with great power and athleticism both in the pocket and as a runner/scrambler in the open field. And like Newton, the Wyoming gunslinger just needs to clean up his mechanics and be more consistent as a passer, which will come with NFL coaching.

Is he ever going to push for 15 rushing touchdowns like Newton did as a rookie? Probably not, but Josh Allen has more touch and natural accuracy than the former NFL MVP. I truly believe the No. 7 overall pick has 5,000-yard upside and could be a superstar fantasy quarterback as soon as 2019.

The case for Lamar Jackson

Ravens linebacker C.J. Mosley called Lamar Jackson “a young Michael Vick”, but he might actually be more aptly named “Michael Vick 2.0”. The former Heisman winner doesn’t have quite the effortless rocket-arm that Vick did, but he’s more advanced as a passer coming out of college and can still spin it with a quick release.

Of course, most fantasy owners are interested in Jackson’s long-term prospects because of what he can do in space with the ball in his hands. In three seasons at Louisville, he rushed for 4,132 yards and 50 touchdowns as arguably the most dangerous player in college football history.

To compare, generational running back prospect and No. 2 overall pick Saquon Barkley rushed for 3,843 yards and 43 touchdowns in the same amount of games (38) over the same span. Now, being a prolific college quarterback doesn’t automatically equate to NFL success, but Jackson will be an absolute star if he approaches his potential.

Right now, Baltimore has a much better group of wide receivers than Buffalo does, with Michael Crabtree, John Brown, and Willie Snead. But for the future, Crabtree turns 31 in September, Brown needs to prove he can stay healthy on a one-year deal, and Snead needs to rebuild his value after a lost season in New Orleans. Basically, there is as much certainty for the Ravens future at the position as there is for the Bills.

At tight end, rookies Hayden Hurst and Mark Andrews are both under contract for at least four years each, so Lamar Jackson will be able to build chemistry with them on the practice field for the entire 2018 campaign and all next offseason before potentially taking over as the starter for Joe Flacco next fall.

Unfortunately for Jackson, the coaching staff led by John Harbaugh is on the hot seat like never before, and the worst thing for a young quarterback is lack of stability. So, if the Ravens have another disappointing season that concludes with Harbaugh’s dismissal, it would almost certainly include the entire coaching staff being fired, which would force Jackson to learn a whole new playbook in 2019.

Maybe I’m getting too far ahead of things, but a coaching change is important to keep in mind after owner Steve Bisciotti openly admitted that he thought about firing Harbaugh following the 2017 season. And it’s unlikely a coaching prospect like Sean McVay will be available to immediately come in and turn the offense around.

A postseason berth would hopefully keep the current regime in place for the Ravens, and success under Joe Flacco in 2018 wouldn’t preclude the team from moving on from him in favor of Jackson next year. (Look at Alex Smith with the Chiefs.)

I think that—a year to sit and learn behind Flacco before taking over in his second season (with the same coaching staff in place)—would be the best-case scenario for Jackson’s career path, as offensive coordinator Marty Mornhinweg has experience working with running quarterbacks, most notably with the Eagles during Michael Vick’s career resurgence.

No matter what happens in 2018, Lamar Jackson will eventually see the field and become a fantasy difference-maker due to his ability as a runner. I don’t think he will turn into a perennial 4,000-yard passer, but he wouldn’t need to if he makes enough plays with his legs. Jackson could become the first quarterback to rush for 1,000 yards since Vick—and he might be able to do it more than once, which should be music to the ears of fantasy owners.

For some reason, “Twitter scouts” wanted to paint Josh Allen and Lamar Jackson as enemies in the pre-draft process, but contrary to popular belief, both can have great NFL careers, and for the purpose of this discussion, both can be fantasy superstars.

Josh Allen has more upside as a pocket passer and can be used more often in short-yardage/goal-line situations as a runner, while Lamar Jackson can make game-breaking (and heartbreaking to opposing fantasy owners) plays when he gets into the open field.

There are definite benefits to putting stock in both guys for the future, but I would give the very narrow edge to Allen because of the long-term stability in Buffalo and the potential pieces that the team might add around him in 2019 and beyond.