Home / frontfantasy / Who Will Be The Better Fantasy Option: Jeremy Maclin or Eric Decker? 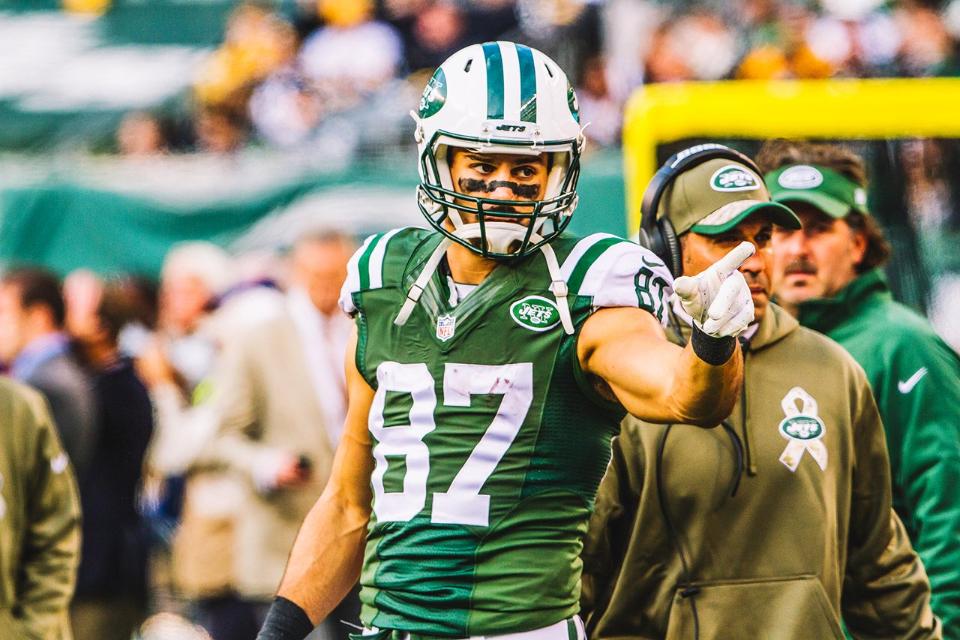 Who Will Be The Better Fantasy Option: Jeremy Maclin or Eric Decker?


Both Jeremy Maclin and Eric Decker are proven receivers that were released and found a new team in June, as Maclin signed with the Ravens and Decker signed with the Titans. Maclin just turned 29 and has career numbers of 474 catches, 6,395 yards, and 46 touchdowns. Decker, on the other hand, just turned 30 and has put up 385 catches for 5,253 yards and 52 touchdowns in his career. Past production doesn’t help fantasy owners in the future though, so, which veteran wideout will be the better fantasy option in 2017?

Jeremy Maclin will immediately step in as the starter across from Mike Wallace on the Baltimore offense, and it couldn’t have come at a better time for fantasy production. Ravens quarterback Joe Flacco threw for a career-high 4,317 yards last season, and it was in large part due to the pass-happy Marty Mornhinweg taking over for Marc Trestman as offensive coordinator after Week 5. Flacco threw for 256.4 yards per game under Trestman compared to 275.9 under Mornhinweg. The offense should really open up as Flacco gets in a full offseason, training camp, and regular season with it.

The Ravens offense is one that Maclin should have no troubles with, as besides simply being an intelligent guy, Baltimore’s newest receiver played under Mornhinweg when the two were in Philadelphia together. Right now, most people have Mike Wallace as the best fantasy receiver to own on the Ravens in 2017, but I’ll likely have Maclin ranked ahead of him. Wallace will be 31 when the season starts, so despite finally surpassing 1,000 receiving yards for the first time since 2011, his speed could go at any time.

Maclin is a much more polished, all-around receiver, and will probably become the no-doubt #1 option for Joe Flacco before long. In his last two healthy seasons, Maclin has gone for lines of 85/1,318/10 (2014 with PHI) and 87/1,088/8 (2015 with KC). I am assuming that Maclin will become the focal-point of the Ravens offense, which will include serving as Flacco’s security blanket and biggest threat in the red zone. An 80-catch, 1,000-yard, and double-digit-touchdown campaign is certainly possible. That would make him a solid WR2.

Eric Decker, like Maclin, should immediately step in as a starter on the Titans offense. However, Tennessee has a little more talent on the depth chart, including fifth-overall pick Corey Davis, Rishard Matthews, Tajae Sharpe, and third-round pick Taywan Taylor. The biggest threats are Davis and Matthews, and while it is true that three receivers from the same team could all be fantasy contributors (New Orleans had two in the top-10 and three in the top-35 last season), it is a lot less likely on a run-heavy offense like Tennessee’s.

In a best-case scenario for Decker, Corey Davis takes some time to adjust to the NFL game and Rishard Matthews takes a backseat to the former Jet and Bronco. If that happens, Decker could easily replicate Matthews’ WR15 finish from a year ago, when he caught 65 passes for 945 yards and nine touchdowns.

Decker is one of the NFL’s premier touchdown scorers, having caught at least 11 of them in three of the past four healthy season, and Marcus Mariota excels—to say the least—in scoring opportunities. Decker can play outside or in the slot, and it would be great for his fantasy owners if the Titans move him around and feature him in the red zone. WR2 is a real possibility to Decker, too.

I am not going to have Maclin or Decker ranked in my top-20 receivers, but I do think both guys are going to be undervalued heading into fantasy drafts this summer. Currently hanging around or into the 40s at wide receiver in early mock drafts, you could do a lot worse than proven, versatile wideouts in the late rounds.

As of now, I would give the edge to Maclin.