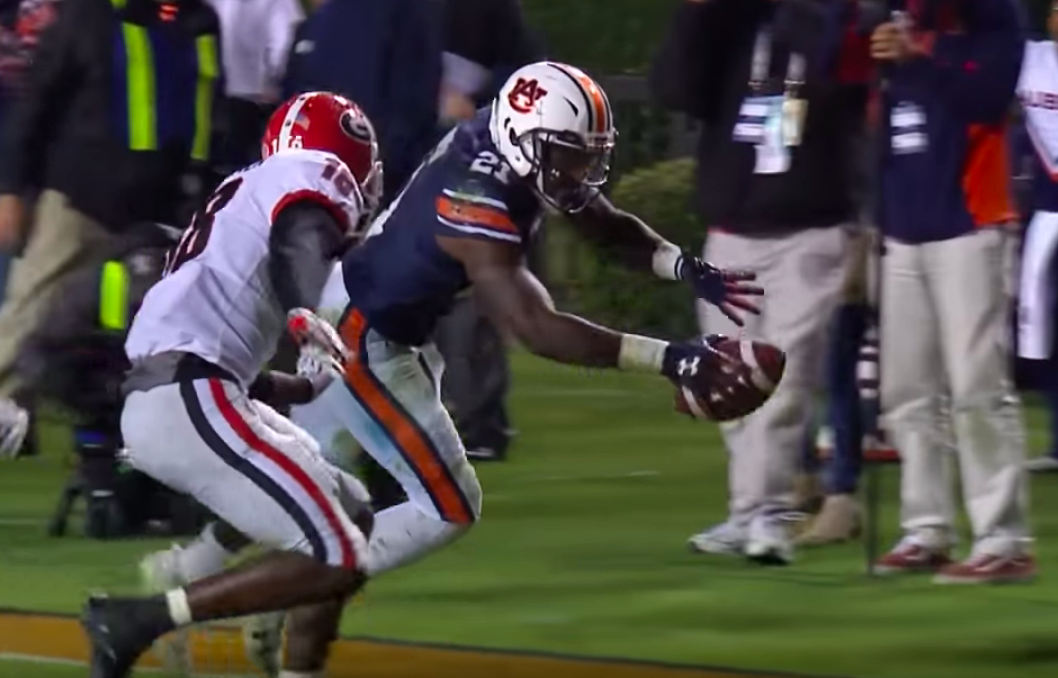 
Notre Dame, TCU, and Washington are all knocked out of the top ten after their losses over the weekend, so other teams have some big openings as they make a final push for the College Football Playoff. We also have the first non-Power Five team in the rankings this week, as the 9-0 UCF Knights get in at No. 10.

It looked like Alabama was going to suffer their first loss of the season at the hands of Mississippi State in Starkville, but quarterback Jalen Hurts and the team stayed calm and improved to 10-0. Now the Crimson Tide have what should be a cakewalk against Mercer before they play in the Iron Bowl.

Miami wasn’t getting enough respect from the Playoff Committee, but not many people expected them to put the beat down on Notre Dame that they did. If the Hurricanes are not in the top four when the rankings are released, there’s a problem.

Wisconsin is 10-0 for the first time in school history, and like Miami, they aren’t getting enough respect for their season. The Badgers are one of three undefeated Power Five teams, and they completely dominated against an Iowa team that’s given almost everyone in the Big Ten trouble this season. It’s time to start showing Wisconsin more respect for what they’ve done so far this year.

The fourth quarter was closer than many expected, but Clemson still pulled away and won a rivalry game against Florida State. They control their own destiny and need to take care of business against Citadel and South Carolina before facing Miami in the ACC Championship on December 2.

If you want to put Oklahoma in the top four, there’s certainly a good argument for it. The Sooners have two straight wins over top-11 teams, and they’ve both been in convincing fashion with stellar offense led by Baker Mayfield. The defense is what has OU at number five for now.

Remember, Auburn’s only two losses of the season were at Clemson and at LSU. Both were one-possession games, and they were in control of the LSU game—though a loss is a loss. Bottom line is Auburn is a very good team, and if they win out—which would include a win over Alabama and another win over Georgia in the SEC Championship—they have to be in the Playoff.

Despite getting destroyed by Auburn, this is not the end of the world for the Bulldogs. Georgia already has a spot in the SEC Championship Game locked up, so they’ll face either Alabama or have another shot at Auburn in a few weeks. A one-loss SEC champion would be awfully difficult to keep out, so Georgia is still in control.

After two straight losses, Penn State got back on track against Rutgers—and they basically got what they needed with some teams losing. They need some help, but if they end up in the Big Ten Championship against Wisconsin, we’ll see if the Committee puts them in.

An obvious favorite of the Committee, Ohio State could also work their way back up the Playoff rankings. Both Penn State and Ohio State being in it despite having two losses already shows how crazy this season has been so far.

They haven’t lost a game, it’s time to put UCF in the top-ten. True, they don’t play in a Power Five conference, but they’ve beaten the teams in front of them. Head coach Scott Frost has done an outstanding job with this team, and it’ll be interesting to see where they’re ranked after some of the losses that occurred over the weekend.