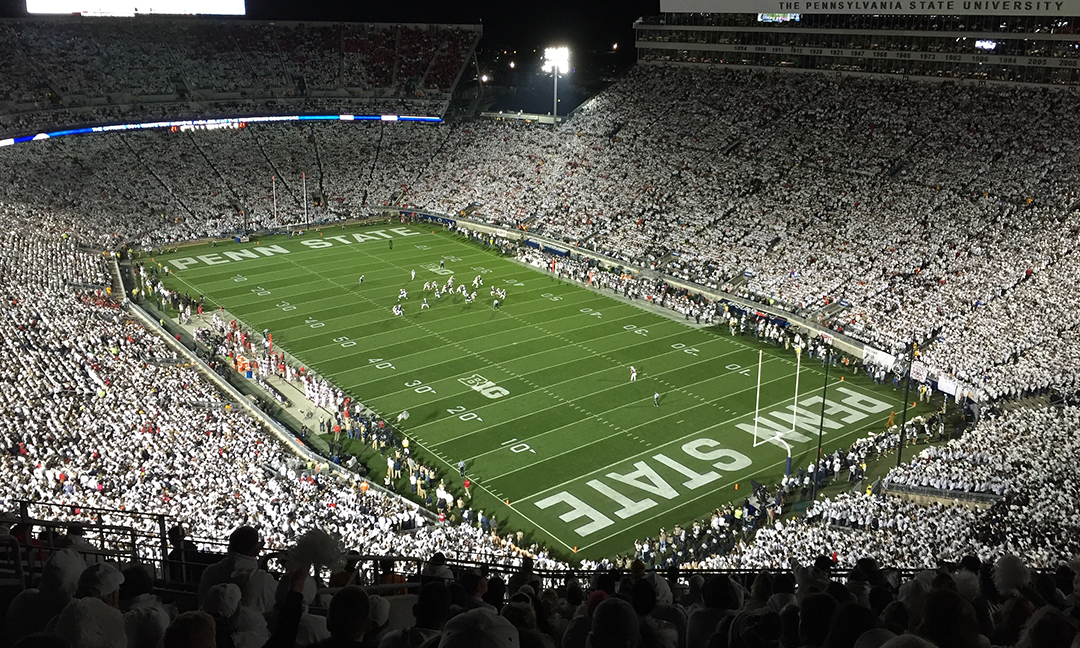 
For the first time this season, the ratings have remained the same from the week before. Everyone in the top ten either had a bye or took care of business, including Penn State with their huge win over Michigan and the Wolverine’s stingy. Oklahoma State and Oklahoma both had wins that were closer than they would’ve liked, but a win is a win and they remain in the College Football Playoff hunt. And this is the last weekend of football before the first College Football Playoff rankings are released, so crazy stuff is bound to happen.

Alabama simply doesn’t slip up, as they again blew out rival Tennessee, 45-7, on Saturday. It’s definitely fair to ask who Alabama beat, but they’ve dominated in every game. The Crimson Tide have a bye this week before facing a resurgent LSU team on November 4.

It’s difficult to have a more convincing win than Penn State did against Michigan. The Wolverines headed into the game with the best defense in the nation, but Saquon Barkley and the Nittany Lions had a dominant performance to improve to 7-0. Granted, that game was in Beaver Stadium against a record White Out crowd—this weekend in Columbus against Ohio State will likely be a bigger challenge. But it’s one they should be able to pass.

After a bye week for extra preparation, Georgia might have their toughest test of the season so far when they face Florida on Saturday. The Gators have won three straight against the Bulldogs—and the closest game was last year by 14 points—but it’s probably time for the series to turn in favor of this dominant 2017 Georgia team. We’ll find out on the field soon enough.

As expected, TCU beat up on Kansas en route to a 7-0 record. This Saturday against a 5-2 Iowa State team that already upset then-No. 2 Oklahoma will be a major challenge. The game is in Ames, Iowa, and Iowa State head coach Matt Campbell has ton an excellent job with his team. The late-afternoon games (particularly Penn State-Ohio State, Georgia-Florida, and this game) are some of the most exciting in a while.

Freshman running back Jonathan Taylor continues his superb first season in Madison, as he became the sixth freshman in FBS history to reach 1,000 rushing yards in his first seven games. He continues to be the workhorse for Wisconsin’s offense as he runs through the whole the offensive line is opening for him. The Badgers need to watch out for Lovie Smith’s Fighting Illini on Saturday, but they should improve to 8-0 and had a strong case to be a top-four team in the initial Playoff rankings.

Clemson probably would have loved to get back out there after their devastating loss to Syracuse on Friday the 13th, but they had the bye week to wait out. They should be ready to go, and it’d be a shock if the Tigers lost a second straight game. Hopefully quarterback Kelly Bryant is feeling better and can play against Georgia Tech on Saturday night.

Clemson’s loss to Syracuse no doubt had Miami on upset alert against the Orange, and they again survived a close one to remain undefeated. The Hurricanes need to keep it going against the 1-7 North Carolina team this week, as they cannot look ahead to Virginia Tech.

It took 22 fourth-quarter points and a late touchdown to get it done, but Baker Mayfield and the Sooners survived at Kansas State. K State is always good for a competitive game, especially at home, so there’s no reason to be too alarmed based off the one game. Though it’s not just been one game—OU has struggled defensively as of late.

Ohio State had a bye week, but again, there is a clear argument for them being higher than No. 9 in these rankings. But they didn’t defend home field earlier in the season against Oklahoma, so they remain down here. This Saturday is a prime spot for them to jump right back up near the top of the Playoff conversation, as No. 2 Penn State is coming to town. A loss here would end their Playoff hopes.

There are arguments for other teams like Washington, Virginia Tech, and Notre Dame to be in this spot, but OK State won their game against Texas in overtime to keep their Playoff chances alive. A date with West Virginia in Morgantown will determine a lot.