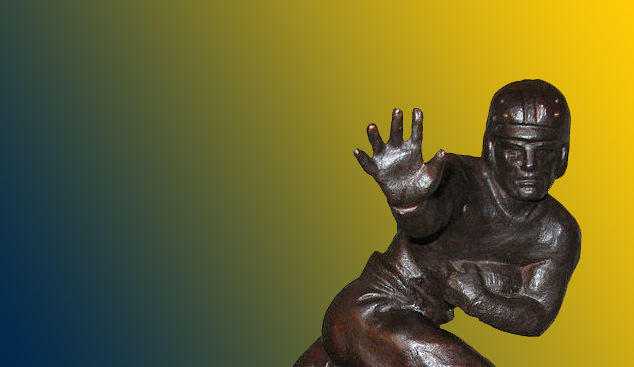 
College football is back in just three Saturdays, so we’ll be counting down the top 15 Heisman Trophy candidates for this season over the next three weeks. Players that aren’t included in the countdown will likely also be in the mix, and among the guys that narrowly missed the top 15 are:

The 2019 countdown begins with Michigan quarterback Shea Patterson. Last season, Patterson landed at No. 10 in the Heisman candidate countdown, but he starts things off at No. 15 this year.

New offensive coordinator Josh Gattis is bringing more of a spread attack to the Wolverines, which will play to Shea Patterson’s strengths and allow him to put up the big numbers required to win the Heisman Trophy today. Patterson could have left for the NFL this year, but he returned for his senior season with 20 games of playing experience under his belt, including 13 starts for Michigan in 2018 as a transfer from Ole Miss. Late in the year, Michigan plays two of their biggest rivals (Michigan State and Ohio State in games Patterson likely needs his team to win for him to win the Heisman) in the Big House. And with other big games against Wisconsin, Penn State, and Notre Dame, Patterson will have plenty of primetime opportunities to put a Heisman stamp on his season.

Playing so many tough opponents and in perhaps the toughest conference in college football isn’t going to be easy. The adjustment to a new offensive system could have some growing pains for players used to an old-school, power run attack. Dylan McCaffrey could get more time at quarterback at the expense of Patterson, which would make it nearly impossible to win the Heisman.

Patterson must make highlight-reel plays, which he’s shown the ability to do throughout his college career, in the big games while putting up top-tier numbers and leading Michigan to a Big Ten title and College Football Playoff appearance.