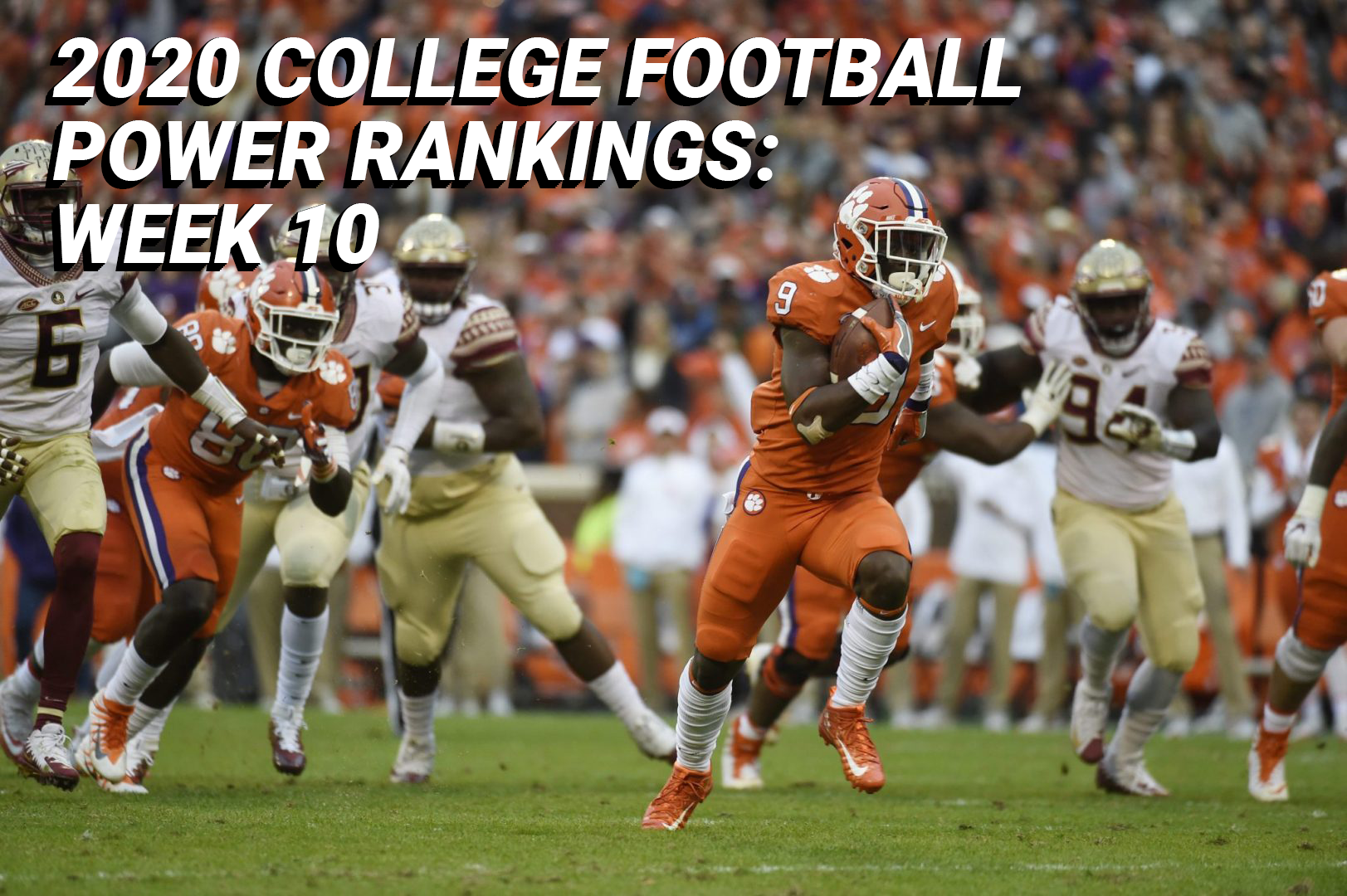 
With the Pac-12 joining the party this week, we’ll finally have a full weekend of college football. But no Pac-12 teams make the cut in the power rankings yet.

You can easily blame not having Trevor Lawrence at quarterback on it, but Clemson was simply off and didn’t have things go their way early against Boston College. However, Dabo Swinney’s squad was able to rally from a 28-10 deficit and keep their regular season winning streak alive. Now, the No. 1 team in the nation will face a massive test without Lawrence in the lineup versus Notre Dame because of COVID-19 protocols.

An easy case can be made for Alabama in the No. 1 spot in the power rankings. Star receiver DeVonta Smith helped pick up the slack with his friend Jaylen Waddle (who cheered from the sidelines on a golf cart) out for the season, racking up 11 receptions for 203 yards and four touchdowns, becoming the first player in SEC history to record two games with four touchdown catches. It was a very promising sign for the defense to get a shutout against Mike Leach’s offense.

Ohio State jumped out to an early lead on Halloween night, and they didn’t look back on the road at Penn State. Justin Fields tossed four touchdowns in the victory, and the Buckeyes also racked up over 200 yards on the ground with a powerful rushing attack. Ohio State will now face former assistant and Rutgers head coach Greg Schiano this week.

While Georgia fans always seem to want more from their offense, Kirby Smart probably doesn’t mind 14-3 victories. The Bulldogs survived against a Kentucky team that should not be taken lightly, and next up is what amounts to an elimination game for the College Football Playoff versus Florida.

Everything is lining up for Notre Dame to get a huge statement win that could help push Brian Kelly’s team over the edge with ramifications both this season and into the future. A win over Clemson, even with the Tigers not having Trevor Lawrence, would be a hallmark for the independent program (by choice) playing in the ACC this season. After sneaking past Louisville earlier in October, Notre Dame has outscored Pitt and Georgia Tech by a combined margin of 76-16 over the past two games.

Cincinnati is rolling, and they got a bit of redemption with a blowout win over Memphis after losing to the Tigers in the AAC title game last year. The average margin of victory for the Bearcats is 27.6 points, and they will likely be favored the rest of the way in the all-conference schedule.

It was not a good look to have a halftime fight with Missouri break out, but Florida’s return to the mix after their COVID-19 issues was at least very entertaining. Dan Mullen pumped up the crowd like a WWE wrestler and then wore a Darth Vader Halloween costume after the game. The Gators will need the energy this Saturday in the matchup with Georgia.

Aside from the seven-point win against UTSA on October 10, BYU has been running through their competition this season. The Cougars are early underdogs for their road game at Boise State this Friday night, and the game will likely determine whether they have a realistic shot of making the College Football Playoff as an unbeaten non-Power Five school—“style points” could help.

Arkansas cut into the big hole in the fourth quarter, but Texas A&M controlled another SEC victory and improved to 4-1 over the weekend. With an impressive win over Florida and their only loss coming at Alabama, we might be too low on the Aggies here—they’ll probably jump closer to the top five if they beat South Carolina this Saturday.

The coronavirus breakout within the Badgers program has caused many to criticize the Big Ten for dragging their feet on starting a 2020 football season. There is not much flexibility for situations like this because the Big Ten season didn’t begin until late October, and hopefully similar situations don’t arise within the conference and in the Pac-12.