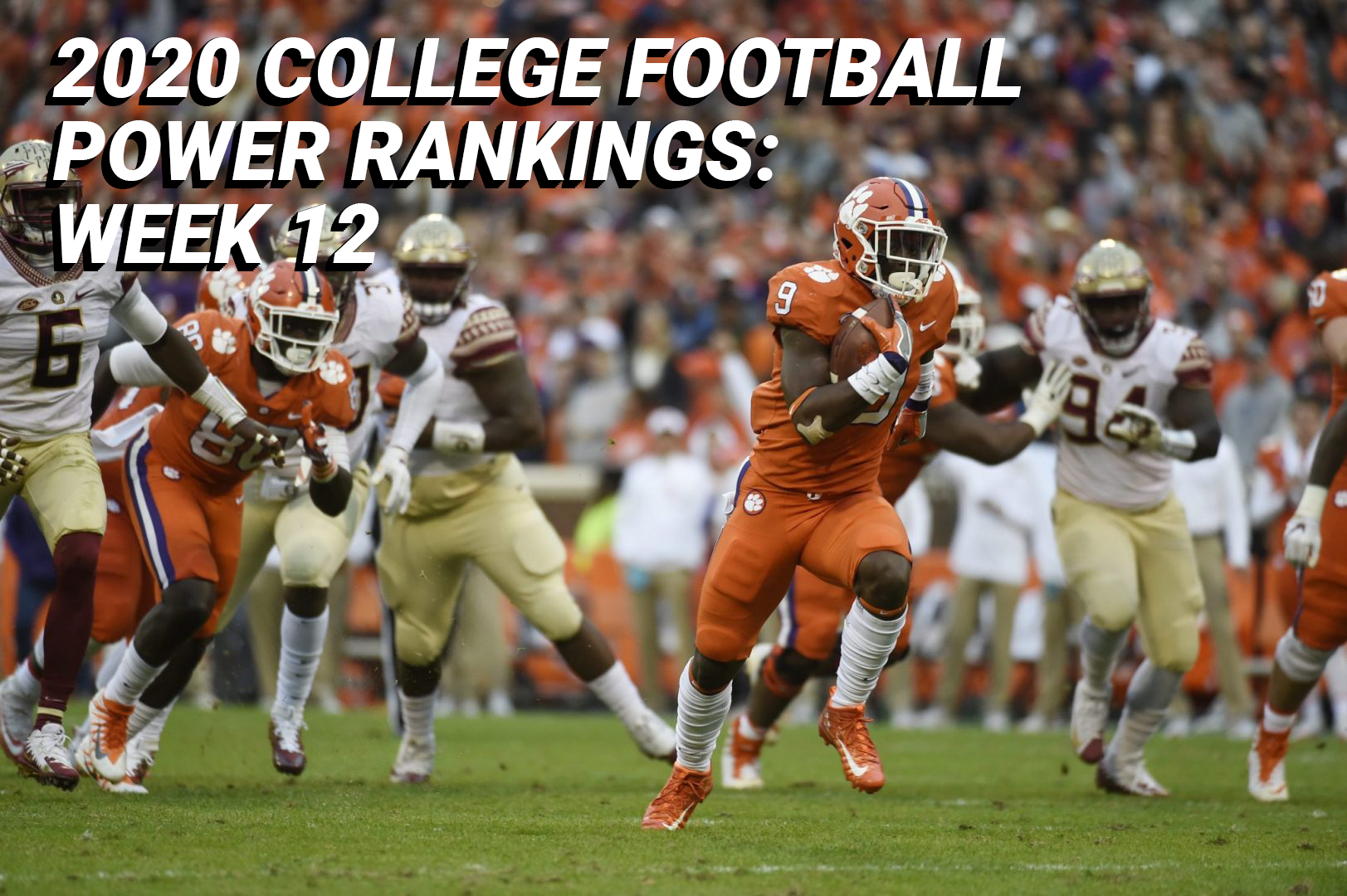 
With several teams off due to COVID-19 protocols or bye weeks, there is not any movement aside from the No. 10 spot in this week’s college football power rankings.

You could probably throw out the records for the Alabama-LSU matchup, but unfortunately we did not get the game last Saturday because of the virus. There is hope that the SEC rivalry will somehow be rescheduled, but for now the Crimson Tide will finish their regular season with games against Kentucky, Auburn, and Arkansas.

We expected some top-ten matchups for the Buckeyes this season (ideally versus Penn State and Michigan), but college football fans will take a No. 3 vs. No. 9 showdown between Ohio State and Indiana in a “Big Noon” game this Saturday. Despite the missed game last week, Justin Fields and Ryan Day’s squad should remain sharp in one of their biggest games in a shortened season.

There was no let down for Notre Dame following their win over Clemson a couple of Saturdays ago. Ian Book totaled four touchdowns (three passing) while leading the team in both passing and rushing in the victory over Boston College. The 21-0 second quarter was key in the 45-31 road win, but the game always felt in control for the Fighting Irish.

Clemson had a planned bye week (not due to COVID-19), and star quarterback Trevor Lawrence will be back for this Saturday against Florida State. The Tigers still have everything in front of them in the ACC and potentially the College Football Playoff, so look for Dabo Swinney to have his players ready to go, as usual.

Kyle Trask and Florida continue to roll offensively, even without All-American tight end Kyle Pitts in the lineup. The defense is slightly concerning, but the Gators can obviously score with anyone. It was cool after the game to see former Florida quarterback Feleipe Franks have a friendly embrace with his old team and coach.

Cincinnati has almost looked like a team in a video game on a low difficulty with their dominance both through the air and on the ground along with the crooked margins they’ve been putting up this season. The Bearcats will next face a UCF team that’s won three consecutive games.

At 8-0, BYU has just two games remaining in its regular season (pending any more scheduled contests), and the Cougars are massive favorites (-47.5) to win against North Alabama this Saturday. Barring any slip-ups, BYU and Cincinnati might be incredibly difficult to rank for the CFP Selection Committee.

Texas A&M also had COVID impact their schedule last week, but they’ll keep the Tennessee game on their schedule for December 12, which is one week before the SEC Championship Game. The Aggies can potentially shoot up the rankings over the next few weeks, with games coming up versus Ole Miss, LSU, and Auburn.

Indiana head coach Tom Allen is drawing a lot of praise for the way his team plays, and the Hoosiers are coming off a shutout win over Michigan State. It’s probably a great sign that Indiana didn’t seem too thrilled with their overall performance in a 24-0 win, as they are clearly a confident bunch that knows they must play better to topple Ohio State this weekend.

The Badgers were finally able to get back on the field following COVID-19 hitting the program, and Michigan was no match for them. Miami, Oregon, and Georgia are all in consideration for the No. 10 spot, but Wisconsin has been too good on both sides of the ball early in their season to leave them out of the top ten.