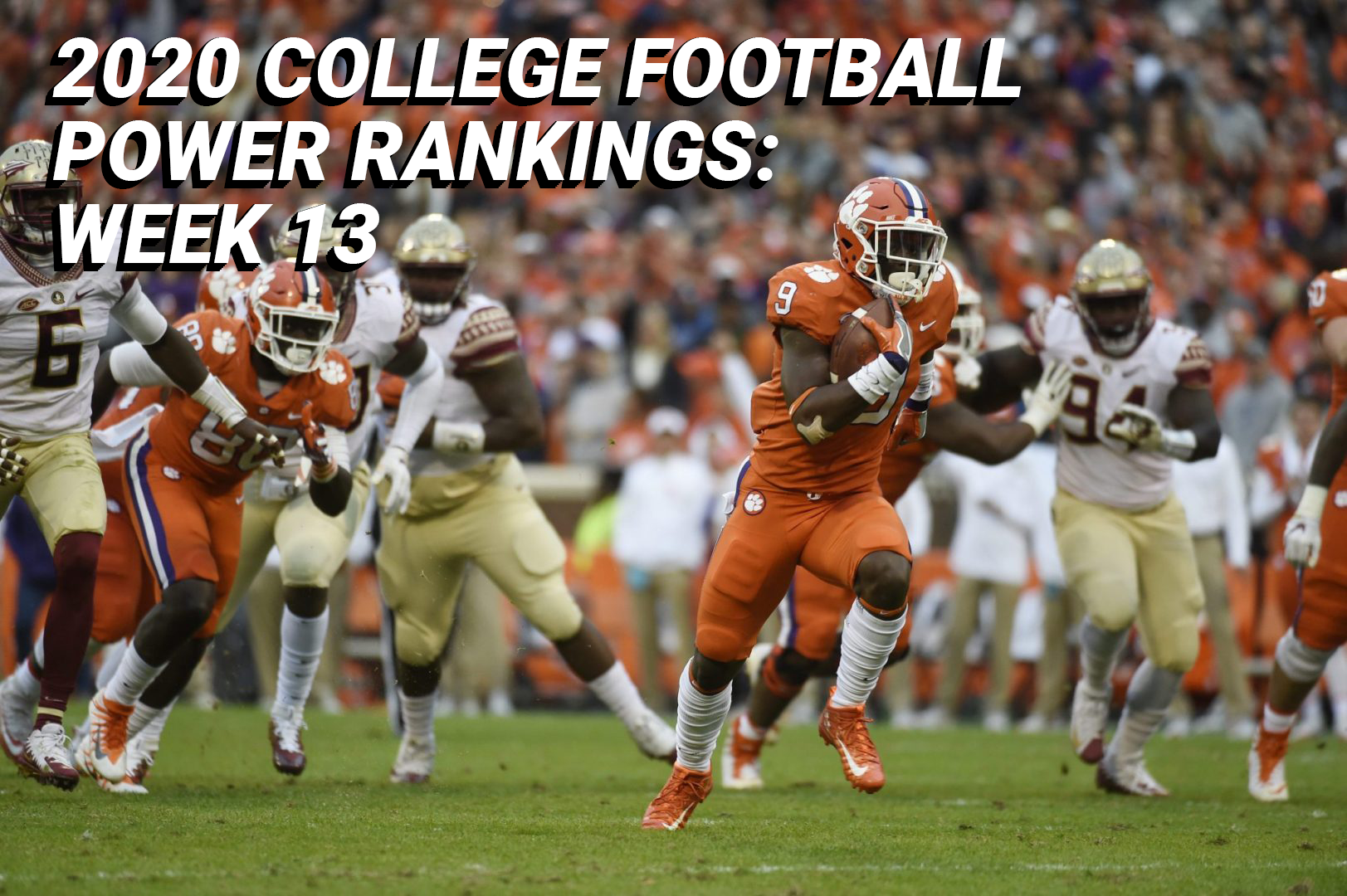 
The initial 2020 College Football Playoff rankings will be out tomorrow night, and the Committee has a very tough task gauging teams with all-conference schedules and varied number of games played due to season starts and COVID-19. The top four looks clear, but the No. 5 and No. 6 spots could be what people have their eyes on.

Nick Saban surprisingly admitted it might be tough to win in college football with just a great defense anymore, but his Alabama team came out and had a stellar defensive showing in a 63-3 rout of Kentucky over the weekend. The No. 1 team in the nation will be heavily favored in the Iron Bowl this Saturday, but we know anything can happen in a rivalry game.

There’s reason to be concerned about Ohio State—Justin Fields’ interceptions, almost allowing 500 passing yards to Indiana—but one of the most talented teams in the nation gets the benefit of the doubt and remains in the top two of the power rankings. The 21-point second quarter to build a 28-7 halftime lead was the difference in the game for Ohio State to remain unbeaten and in pole position in the Big Ten East.

Notre Dame had off last week, giving them extra time to prepare as they go on the road this Friday afternoon to face a North Carolina team that’s had point totals of 48, 41, 56, and 59 over their past four games. The Fighting Irish can make a statement if they’re able to limit the explosive Tar Heels offense.

Dabo Swinney, Trevor Lawrence (who was set to make his return from COVID-19), and Clemson clearly wanted to play against Florida State, but the Seminoles program didn’t feel comfortable playing due to COVID—which Swinney says is an excuse. The media has really turned on Dabo over the past couple of years, but most fans seem to still find the championship coach entertaining. The disconnect between media and everyday fans is not surprising.

After getting outscored in the first quarter, the Gators offense got hot while the defense was pretty stingy, with Florida outscoring Vandy 31-7 over the final three frames. The hope is that All-American tight end Kyle Pitts will be able to return this Saturday against Kentucky, but Kyle Trask has been playing at a very high level despite no Pitts in the lineup.

BYU demolished North Alabama, and they move up to the top six for the first time this season. However, there has been talk that BYU turned down an offer from Washington to play this weekend, which is not what college football fans want to hear; and it seems like a missed opportunity if the Cougars did indeed turn down the offer as has been reported.

UCF looked like it was going to be a tough test, and it was for the Bearcats, who fell behind early and was able to come back and hold on to remain unbeaten. Cincinnati drops one spot in the power rankings after the narrow victory, but the opening on their schedule in a couple of Saturdays lends some intriguing opportunities. It will be extremely interesting to see where BYU and Cincinnati rank tomorrow night.

It’s been a few weeks since Texas A&M has been on the field, so they remain at No. 8 in the power rankings for now. The Aggies will be another difficult team for the Committee to rank in the first CFP rankings.

Northwestern did not really want to test the run defense of Wisconsin, and quarterback Peyton Ramsey was able to avoid mistakes and find the end zone twice in the huge win in a defensive battle. The Wildcats have four consecutive one-possession wins, but they are finding ways to win while allowing just 12.6 points per game.

The final spot in the top ten was between a handful of teams—Oregon, Miami, and Georgia (after an impressive debut from quarterback J.T. Daniels) also being in the mix—but Indiana deserves No. 10 after the fight they showed in Columbus against the Buckeyes. It’s unlikely the Hoosiers will get an opportunity in the Big Ten title game in a shortened season, but they showed they can play with the big boys.