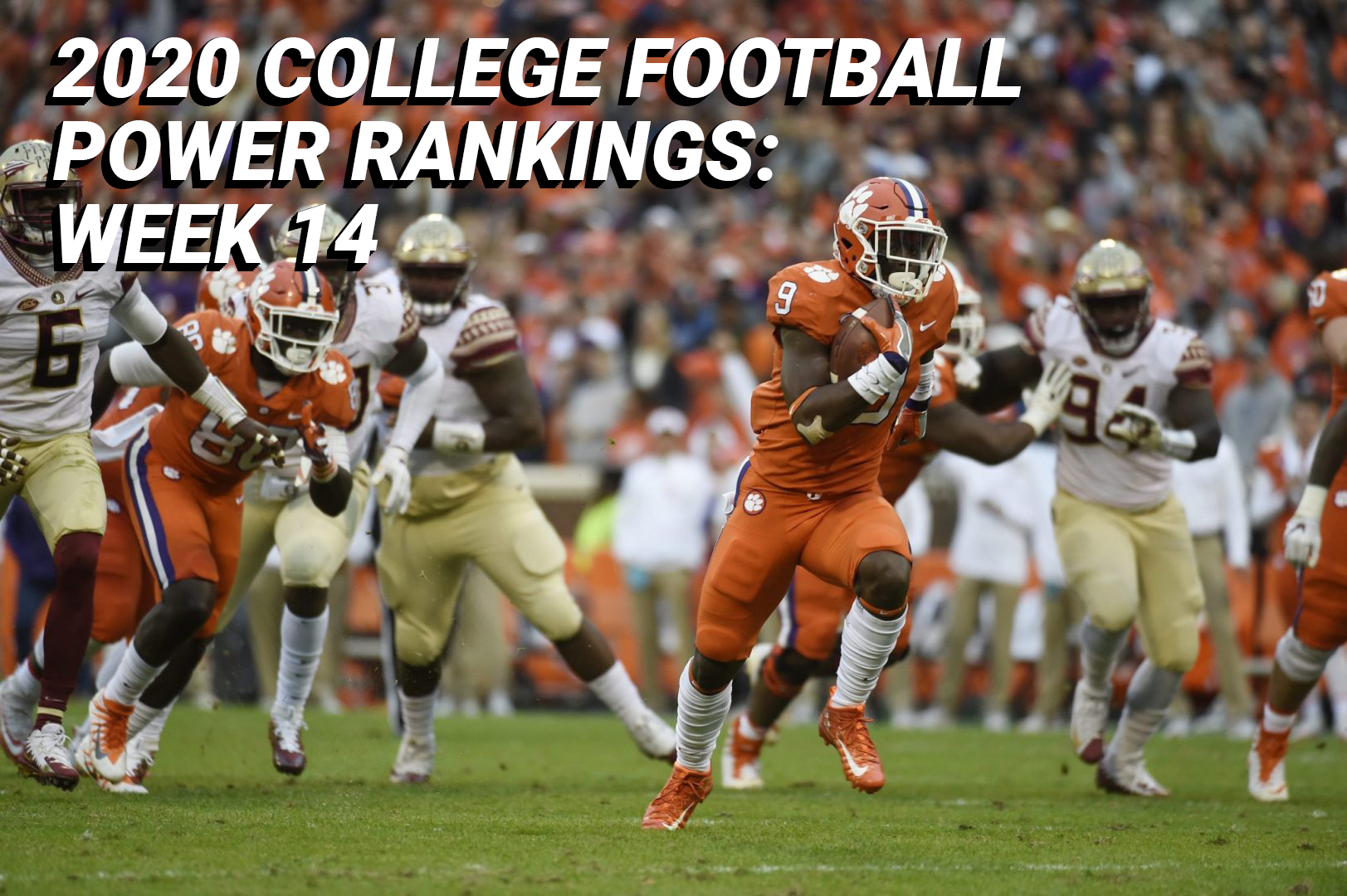 
There’s not much movement in this week’s college football power rankings, with things mostly staying chalk over the weekend. [With the latest CFP rankings to release tomorrow, the next game rankings are from the AP poll.]

Alabama had little trouble in the Iron Bowl even without Nick Saban (COVID-19) on the sidelines, and the Crimson Tide will look to keep rolling with another rivalry game this Saturday night at LSU. Alabama will probably have extra motivation after losing to the eventual national champion Tigers last season.

COVID-19 has impacted the Ohio State football program, with head coach Ryan Day among those that tested positive for the virus. The pause of activities affected last week’s scheduled game versus Illinois, but the Buckeyes hope they can play this Saturday at Michigan State.

It appeared that Notre Dame vs. North Carolina was going to be a big-time shootout, but the Irish completely shut down the Tar Heels in the second half to remain unbeaten. Quarterback Ian Book is now 28-3 in his career as a starter, and his experience has shined this season.

Trevor Lawrence was finally able to get back on the field for Clemson, and he wasted no time lighting it up with 403 yards and two touchdowns in a 52-17 win over Pitt. The Tigers are set to potentially finish their regular season this Sunday against Virginia Tech, but we’ll see if they’re able to get another game on the calendar (perhaps Florida State).

After missing time because of a procedure, Kyle Pitts returned to the lineup and scored three touchdowns in Florida’s rout of Kentucky. While the Gators played exceptionally well on offense without Pitts in the lineup, they are clearly tougher to stop when he’s on the field—aside from the quarterbacks, the All-American tight end might be the most unstoppable player in college football.

There was some major shock and outrage for BYU’s No. 14 ranking in the initial College Football Playoff rankings, but the Committee might not be happy with the Cougars’ schedule, which apparently could have been beefed up by playing Washington. We’ll see if BYU can get a strong addition on the schedule before the end of their regular season.

The Committee did give Cincinnati respect in their initial rankings, putting the Bearcats in prime position for a New Year’s Six Bowl at the very least. As they look to make a CFP push, the Bearcats would benefit from getting another game on the schedule in December.

Offensively, Isaiah Spiller starred in Texas A&M’s win against LSU, rushing 27 times for 141 yards and a touchdown. But the defense was the story for the Aggies, shutting out LSU through three quarters. A&M has given up just ten points combined over the past two games, and they have two more regular season games to continue making a case to the Committee.

Indiana was another slight surprise in the initial CFP rankings, as they were down at No. 12 despite showing great fight and playing Ohio State down to the wire a couple of weeks ago. The Hoosiers are coming off a convincing win over Maryland, as they did not suffer any hangover from their lone loss. [UPDATE: quarterback Michael Penix Jr. is out for the season with a torn ACL.]

There is no clear path to the College Football Playoff for Georgia, but the offense has looked superb over the past couple of weeks. First it was J.T. Daniels torching Mississippi State for over 400 yards and four touchdowns two Saturdays ago, and then the rushing attack got going with James Cook and Zamir White each scoring twice versus South Carolina. The Bulldogs narrowly edge out Miami for the No. 10 spot.