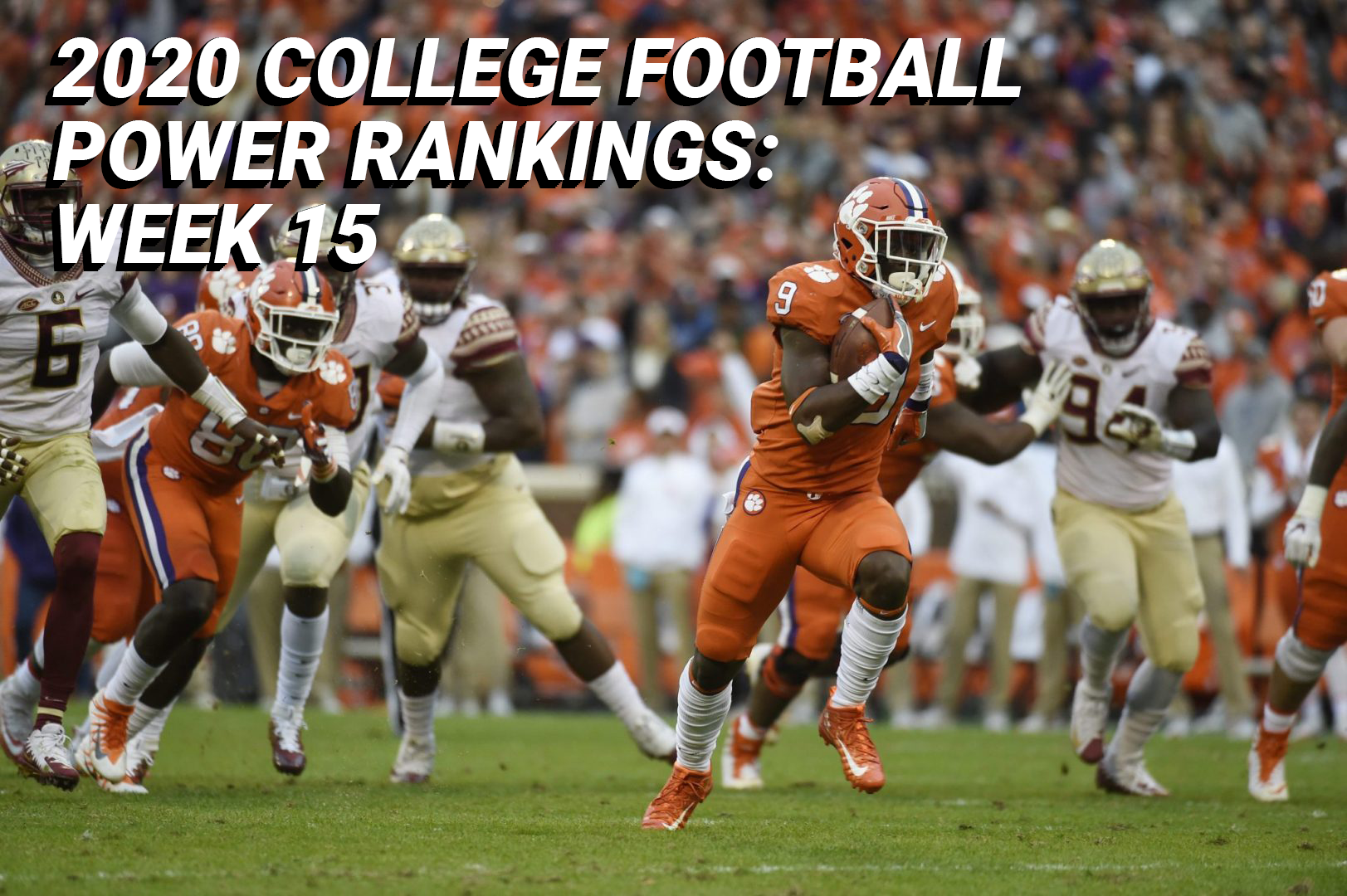 
The College Football Playoff Committee was vindicated with BYU’s loss to Coastal Carolina in one of the top games of the year. Do the Chanticleers now make the top ten after improving to 10-0?

There was a lot of talk about Alabama potentially running up the score on LSU if given the opportunity, but the Crimson Tide didn’t embarrass the rival too bad in the second half. The first half was another story, with Mac Jones and the offense playing like it was a video game on the easiest difficulty. Something that wasn’t easy was this catch by DeVonta Smith, who has arguably been the best player in college football this season:

Notre Dame took care of business all regular season and deserves a nod in the No. 2 spot in the power rankings after going undefeated and making the ACC title game in their first time playing a conference schedule. It’s a tough field to crack, but quarterback Ian Book may be pushing his way into the Heisman race after totaling five touchdowns versus Syracuse.

Despite the loss to Notre Dame earlier this season, the Tigers are right where they want to be with another ACC championship on the line and a win-and-in scenario for the College Football Playoff. All college football fans should be thrilled that we’ll get to see Trevor Lawrence play in the rematch. It would be big if the Tigers can get Travis Etienne and the rushing attack get going after it was shut down in the first matchup with Notre Dame.

After a week off following the close win over Indiana, Ohio State got into more of a groove in their rout of Michigan State, even without head coach Ryan Day (COVID-19). It was good to see Oklahoma transfer Trey Sermon (ten carries, 112 yards, one touchdown) get going a bit for the Buckeyes, who are mind-blowing 30-point favorites for the upcoming matchup with Michigan. Ohio State moves down in the power rankings because Notre Dame and Clemson deserve to be higher after completing closer to full normal regular seasons.

Florida’s run-game has been virtually non-existent, but Kyle Trask and the passing attack can handle a lot on their shoulders, especially with tight end Kyle Pitts in the lineup. The Gators have a spot in the SEC Championship Game locked up, but they’ll still play LSU this Saturday night and will not get a bye week ahead of facing Alabama (nor will Bama).

It was looking shaky in the third quarter, but Texas A&M put up a 17-0 fourth quarter to top Auburn and remain squarely in the College Football Playoff picture. Tight end Jalen Wydermyer (eight receptions, 89 yards, two touchdowns) was huge as a reliable target for Kellen Mond versus Auburn, and the Aggies defense made late stops when it needed to. A&M isn’t in the conference title game, but they still have two games remaining on their schedule.

Cincinnati may have ended its realistic College Football Playoff chances by being unable to get a big game scheduled last weekend, but they’ll look ahead to a ranked matchup with Tulsa this Saturday afternoon.

Jack Tuttle did a nice job stepping in as the starting quarterback for Indiana, taking care of the ball in the Hoosiers’ defensive battle victory over Wisconsin. It’s obvious how much Indiana’s players respect head coach Tom Allen, who should be getting major National Coach of the Year consideration.

The Vandy game was moved to a couple of weeks, so Georgia still has two more regular season games as they look to work their way into a New Year’s Six bowl. There’s still a lot of football to go, but it’ll be interesting to see how the Committee eventually stacks up the different conferences in the final rankings before bowl season.

Coastal Carolina’s football program appears to be legitimately on the map as a potential long-term non-Power Five contender. For this season, the Chanticleers still have two games remaining before a bowl game, but they are on track to play in an excellent bowl to continue putting the fast-rising program on the map for recruits.