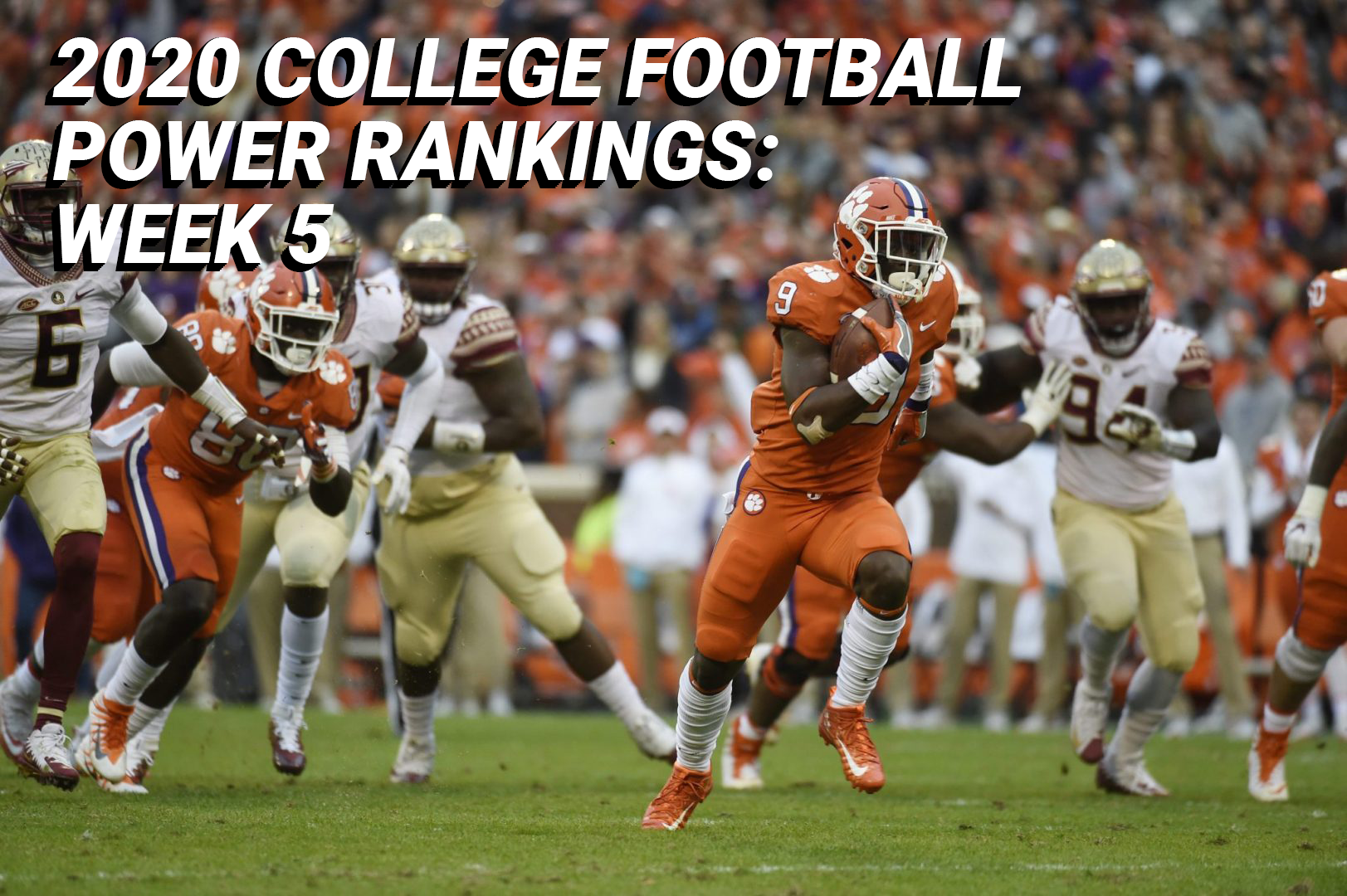 
A wild weekend with SEC football joining the fray included upset home losses by No. 3 Oklahoma and No. 6 LSU. The Big Ten won’t be playing for weeks, but a couple of teams from the conference join the mix now that they’ll be playing this fall—the college football power rankings will be inexact for much of the season, which is par the course for 2020.

Clemson was off this past weekend, but Trevor Lawrence, Travis Etienne and company looked sharp in their first two games—including limited action for the two featured offensive stars in a 49-0 rout of Citadel. With a matchup versus Miami looming, Dabo Swinney will make sure his guys don’t look past this Saturday against Virginia.

The wide receiver talent for the Crimson Tide has simply been insane over the past decade, and the ultra-fast Jaylen Waddle started his 2020 campaign with eight receptions for 134 yards and two touchdowns in a 38-19 win over Missouri. Nick Saban has again said he likes the idea of expanding conference schedules and keeping a ten-game SEC season schedule for good.

Justin Fields probably could have successfully transferred again this year because of the COVID-19 situation, but his patience paid off with the Buckeyes set to hit the field for a 2020 season. The AP poll has Ohio State at No. 6, but No. 3 is a fine spot for them despite other teams playing while they continue to prepare for their season.

D’Wan Mathis couldn’t get much going at quarterback for Georgia, but Stetson Bennett stepped in and picked his teammate and team up by leading the Bulldogs to a convincing second half to start the year 1-0. Georgia fans’ reactions to offensive struggles can be pretty entertaining, and everyone knows the defense will be among the nation’s best again in 2020.

Kyle Trask is picking up where he left off when he took over as Florida’s starting quarterback last season, throwing for six touchdowns in a win over Ole Miss. Star tight end Kyle Pitts (170 receptions for four touchdowns in the opener) is one of the most unstoppable players in college football.

Miami has gotten to play three games already this season, and the offense in particular looks to be in midseason form—the Hurricanes have a case for a top-five spot in the power rankings with the way they’ve played. Transfer quarterback D’Eriq King leads a relentless unit that completely overwhelmed their rival Florida State.

Experienced receiver Seth Williams is a major weapon on the outside for Bo Nix and the Auburn offense, and he made some key catches while the Tigers pulled away from Kentucky. Auburn now faces Georgia already in the second week, and the SEC schedule should be a ton of fun all year.

Notre Dame in the ACC will be intriguing all season. The Fighting Irish had off last week, but they’re already up to No. 5 in the AP poll and have everything in front of them as they look to make the College Football Playoff.

James Franklin and those in Happy Valley are excited about this year’s Nittany Lions team, so it’s great that they’ll be able to compete for a championship. Penn State faces Ohio State on Halloween in a game that should be circled on all calendars.

The Big 12 is not off to a good start, and giving up over 50 points is not ideal, but Texas showed great fight in their comeback victory over Texas Tech. Quarterback Sam Ehlinger, along with his teammates, were an example of experienced senior leaders being tough to defeat—that could be the case all year for the Longhorns in the all-conference schedule.