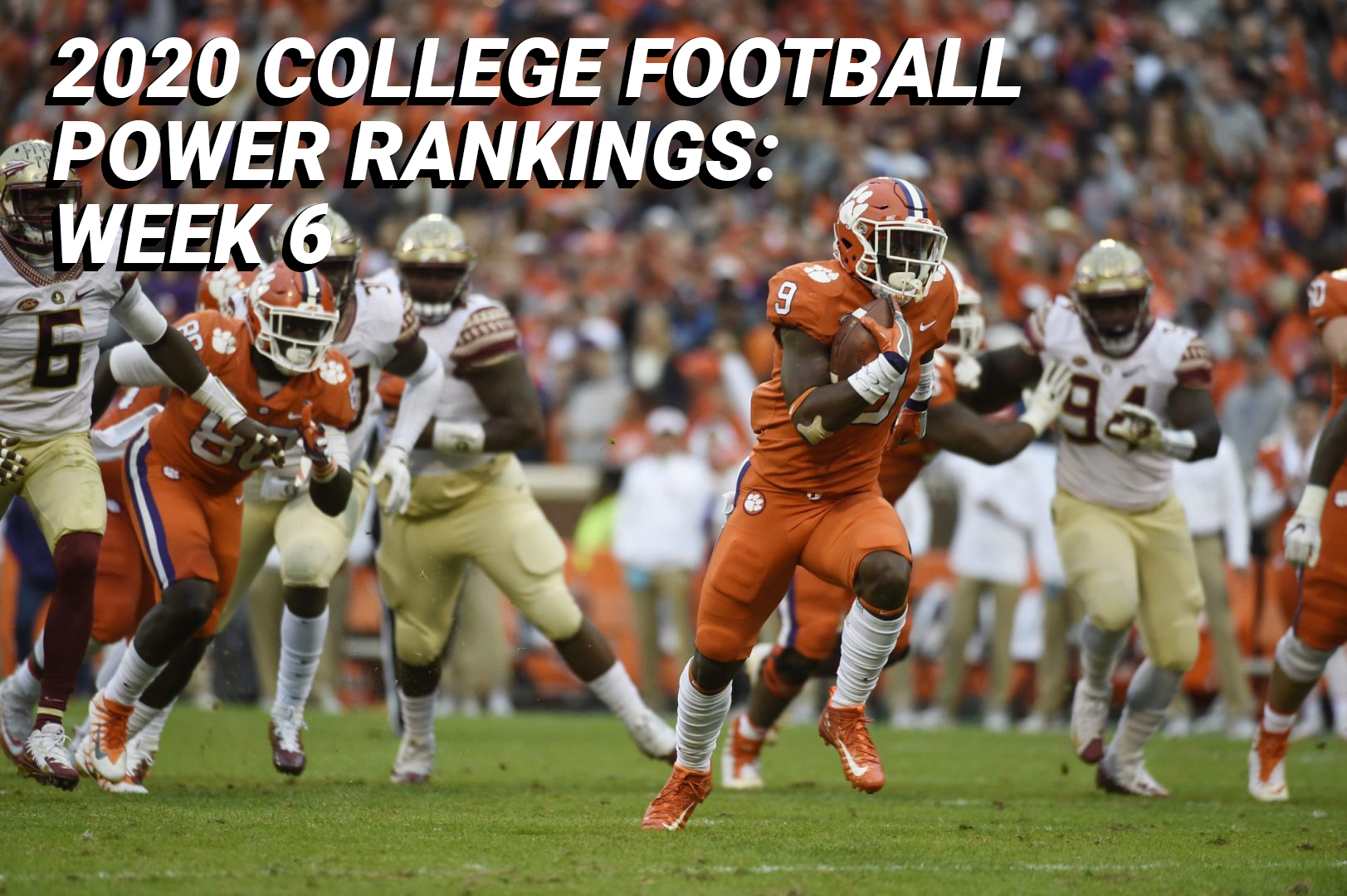 
A big SEC showdown and another loss for a Big 12 power help a couple of new teams get into the top ten of the Week 6 college football power rankings.

Trevor Lawrence (25/38 for 329 yards and three touchdowns) was able to get a good amount of work in No. 1 Clemson’s 41-23 victory over Virginia, and the junior sensation and the Tigers offense should be on-point for this Saturday’s big matchup against Miami. It’ll be interesting to see how Brett Venables’ defense attacks an aggressive Hurricanes offense.

Texas A&M made it interesting for much of the first half, but Alabama turned it on for a convincing 52-24 ranked win at home. Mac Jones threw for 435 yards and four touchdowns, and John Metchie emerged as an excellent third option at receiver behind Devonta Smith and Jaylen Waddle, with five receptions for 181 yards and two touchdowns.

Auburn-Georgia was the most anticipated early-season matchup through the first few weeks of the college football schedule, but the Bulldogs made sure it didn’t live up to the hype with an overwhelming performance on both sides of the ball against the Tigers. Georgia looks to have found something in calm junior quarterback Stetson Bennett.

The Buckeyes drop one spot with Georgia rising, and the AP poll has had Ohio State at No. 6 as they prepare and await the start of their season.

All-American tight end Kyle Pitts added another two touchdowns to make it six scores in two games (and really in six quarters after they were both in the first half). Things will get tougher for the Gators over the next couple of weeks when they face Texas A&M and LSU.

Miami had a bye week at a good time, as they could use all the time they can get to prepare for a matchup with No. 1 Clemson. The experience of transfer quarterback D’Eriq King could be huge for the Hurricanes as they look to pull off an upset.

Notre Dame also had off, but they figure to not have too difficult of a time taking care of Florida State this Saturday night at home.

Penn State and Ohio State remain the only two teams currently out of action to be ranked in the top ten, but the Pac-12 schedule is officially set, so things could get crowded next month.

An early lead and a strong rushing attack helped power North Carolina’s win against Boston College. The Tar Heels are up to No. 8 in the AP poll, and they have a ranked matchup versus No. 19 Virginia Tech this Saturday.

Texas drops out of the No. 10 spot following their loss to TCU, and there are no Big 12 teams in the top ten. Oklahoma State is the only unbeaten team in the conference and has a case for this spot, as does Cincinnati. But BYU has been very impressive through three games, blowing out their opposition 148-24.