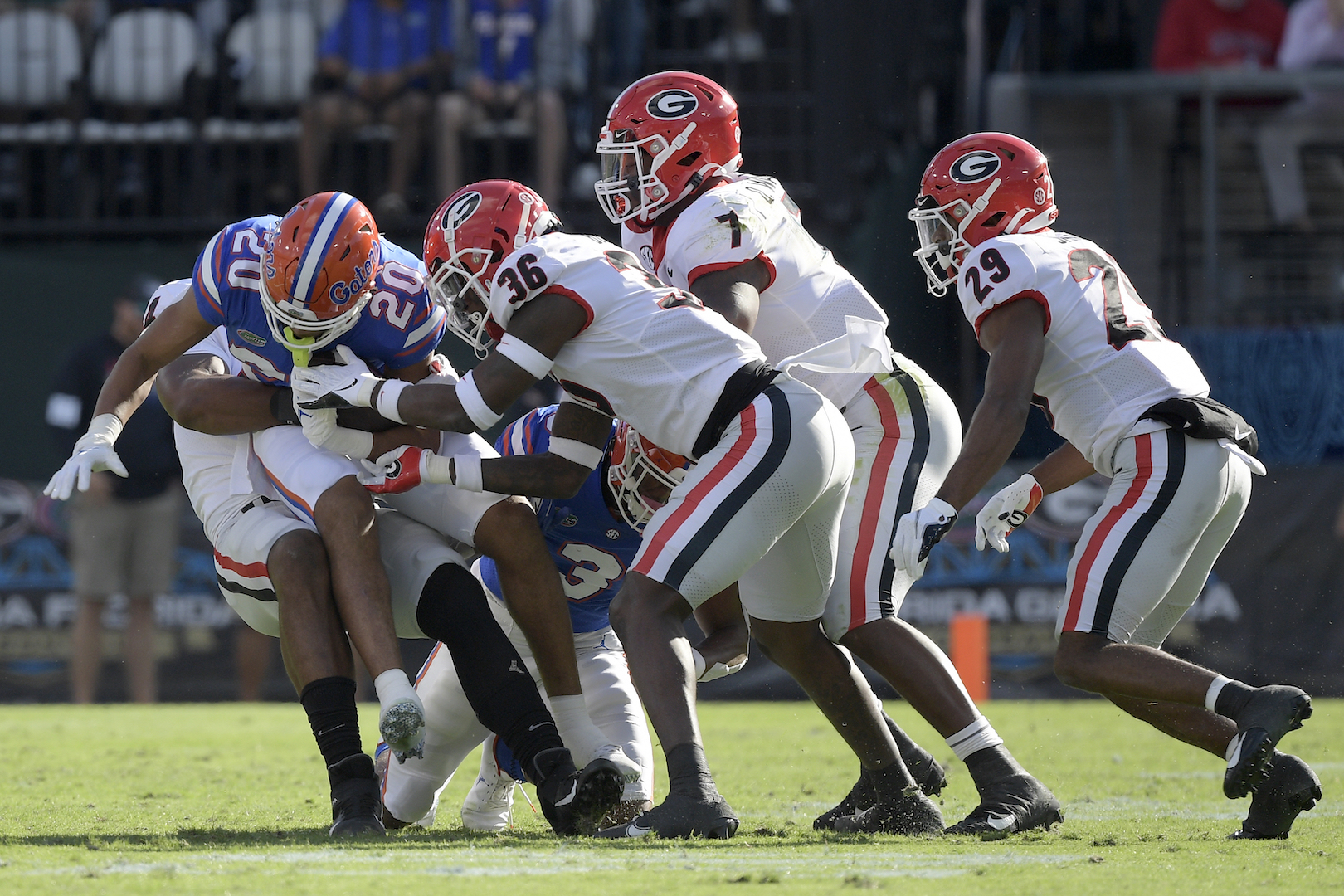 
The first College Football Playoff Rankings of 2021 will release tonight. Where should each team stand in the initial rankings to kickoff November?

Georgia did not have much trouble with Florida, thanks in part to a late surge to close out the first half. Through eight games, Georgia’s defense has allowed six touchdowns—and they’ve intercepted ten passes. Also, the Bulldogs offense has played well with Stetson Bennett under center. There’s little question as to which team will be ranked in the top spot tonight.

Alabama had off last week, and we’ll see where the Committee places them. There’s a loss on the resume (at Texas A&M), but consensus is probably that the Crimson Tide are a clear top-two team—that is, they would be favored over everyone except for Georgia.

There’s still a long way to go, but Michigan State has earned a spot in the initial top four after their big victory over Michigan. Heisman frontrunner Kenneth Walker III is coming off a sensational performance with 197 rushing yards and five touchdowns in the Spartan’s win over the in-state rival.

The Sooners have not looked back since Lincoln Riley made the quarterback switch to Caleb Williams, who just torched Texas Tech for 402 yards and six touchdowns (seven passing scores for the Sooners after Spencer Rattler also received some action)—including 4/135/2 from Marvin Mims and 5/100/1 from Mario Williams. It wouldn’t be shocking if the Committee liked the way OU is playing and puts them as high as No. 2.

It’s somewhat surprising that Cincinnati remains at No. 2 in the AP poll. The Bearcats allowed one-win Tulane to hang around deep into the second half, and “style points” might come into play for them given that they are a non-Power-Five school. However, the Bearcats have a great defense, an experienced quarterback, and own a huge win against Notre Dame.

Oregon’s offense was able to get on track while piling up 52 points on Colorado. The Ducks might be the most interesting team and in the most intriguing situation entering tonight. They arguably have the most impressive victory of anyone this year by beating Ohio State in Columbus, and we’ll see where they land in the initial CFP rankings.

The feeling is that Ohio State will be ranked higher than Oregon, but should they be? It comes down to the Buckeyes being seen as a different team than the one that lost to Oregon earlier this year. The offense is clicking, and the defense has improved. Surviving against a talented Penn State team on Saturday night might help in the eyes of the Committee as they stack these squads up for the first time.

The talk about Jim Harbaugh not being able to win big games will continue probably until he wins a national title—unfortunately for him, that’s just the way things are with the media. The Wolverines still have everything in front of them this season, starting this weekend when they host Indiana.

Notre Dame’s lone loss of the year is to Cincinnati, and they certainly have a shot to be in the Playoff discussion if things go the right way for them. However, the Fighting Irish obviously cannot look past a matchup with a tough Navy squad on Saturday afternoon.

Wake Forest lands in the top ten for the first time this year, and they are a team to watch tonight, as the initial rankings always seem to have some surprising rankings. The Demon Deacons have one of the best offenses in college football (43.4 points per game, fifth in the nation), and they are one of a few unbeaten Power Five teams.