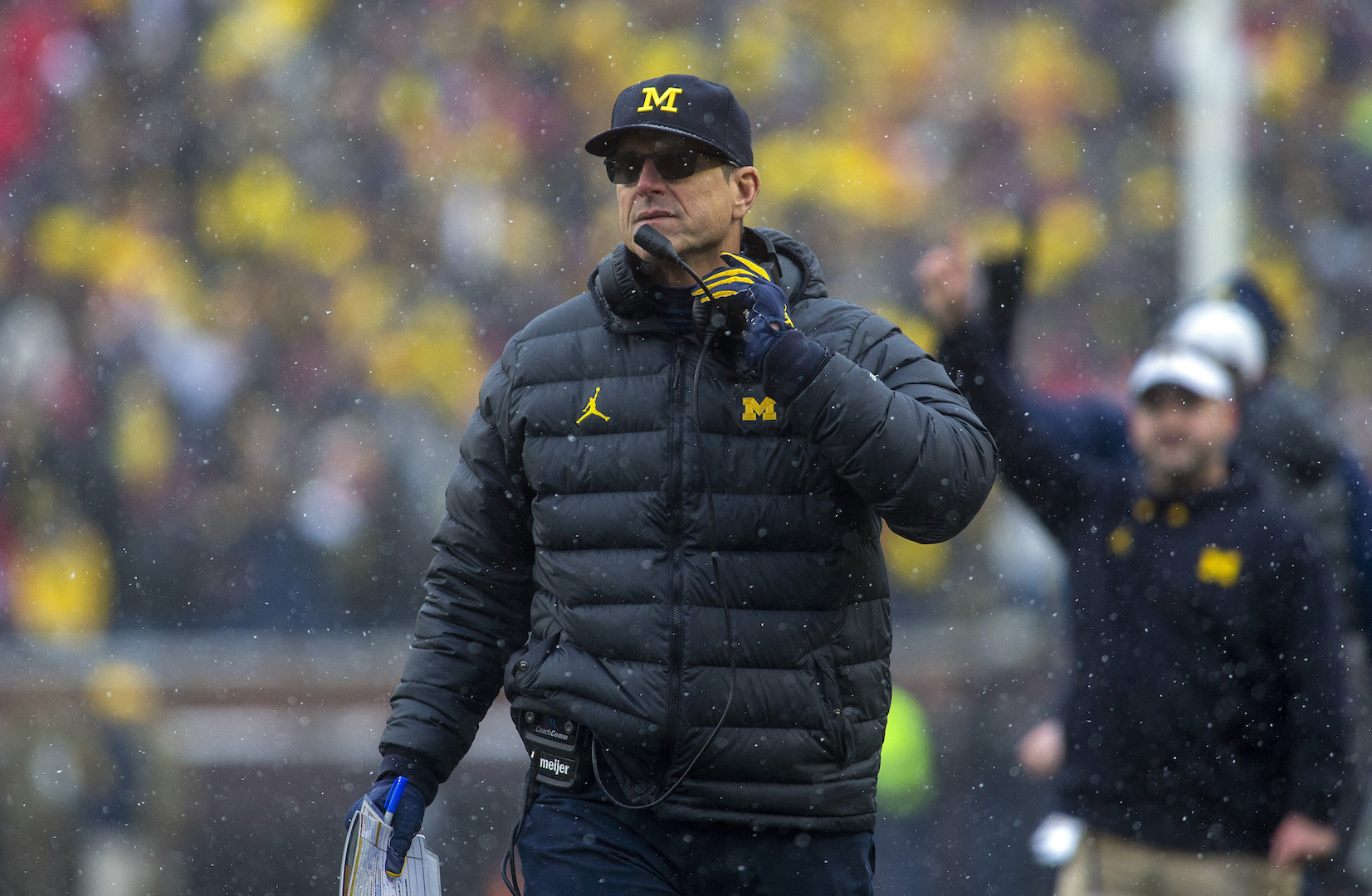 
Everyone is expecting the same top four tonight, and things can be made easy or difficult in the final College Football Playoff rankings depending on what happens during championship week.

Georgia shut out Georgia Tech and remain unbeaten heading into this Saturday’s SEC Championship Game against Alabama. The Bulldogs have not slipped up at all this season, and the current -6.5 spread ahead of the matchup is an indication of how dominant they have been in 2021.

Jim Harbaugh finally got over the hump versus Ohio State as Michigan’s head coach, and the Wolverines did it emphatically. Hassan Haskins had five touchdowns (a record in The Game), and the tone was set from the start in the cold and snowy conditions. Harbaugh has obviously turned the Michigan program around over the past several years, and the criticism he’s gotten has arguably been over the top and unfair. We’ll see what the committee does with No. 2 and No. 3, but Michigan is now squarely in the top four for the CFP and might remain there barring a bad loss to Iowa in the Big Ten title game this Saturday.

The slow start for the offense (and really a slow game overall until the end) could end up being a positive for Alabama after they survived in the Iron Bowl. Nick Saban will have his players extremely focused on executing against a tough opponent with a conference title and CFP berth on the line.

Cincinnati passed their final test of the regular season with flying colors, coasting past East Carolina to complete a 12-0 stretch. With another win over Houston in the AAC title game this Saturday, the Bearcats should become the first team from outside the Power Five to make the Playoff.

The potential Brian-Kelly-to-LSU bombshell aside, Notre Dame has been playing very well since their loss to Cincinnati, and with a loss to a potential CFP team as the only blemish on the record, the Fighting Irish might have a realistic shot of stepping into the top four with an Alabama loss this weekend.

However, Oklahoma State might have something to say about that after coming back to beat Oklahoma (in Lincoln Riley’s final game) last Saturday night. OK State now has a chance to win the Big 12 Championship Game and vault all the way up to one of the top four spots in the rankings.

There’s been some discussion of Ohio State not being completely out of the Playoff mix if total craziness ensues this weekend, but they probably should be eliminated after a pretty convincing loss to Michigan. The Buckeyes can light it up on offense, but the defense doesn’t give the feel of a team that should be in the CFP discussion with two losses on the record and no conference title.

It wasn’t a super entertaining Egg Bowl (which we missed out on last year due to COVID), but Lane Kiffin and Ole Miss will certainly take the victory over the in-state rival. Led by quarterback Matt Corral, the Rebels have had an excellent season at 10-2 ahead of bowl season.

After barely surviving against Texas Tech, Baylor is at No. 9 this week; but a win against Oklahoma State with a conference championship on the line would arguably be enough to boost them into at least the top six—and maybe even near or in the top four if Saturday is crazy enough. If certain things fall into place, we could have quite the discussion and debate on Sunday.

How crazy can things get this weekend? Not to get too hypothetical, but losses by Alabama (particularly if it’s not a close game), Cincinnati, and Michigan could potentially get both Baylor and Oregon into the CFP despite likely being low in the top ten tomorrow night. Of course, the Ducks just need to take care of their own business and get some redemption in the Pac-12 title game over Utah after the Utes blew them out recently.