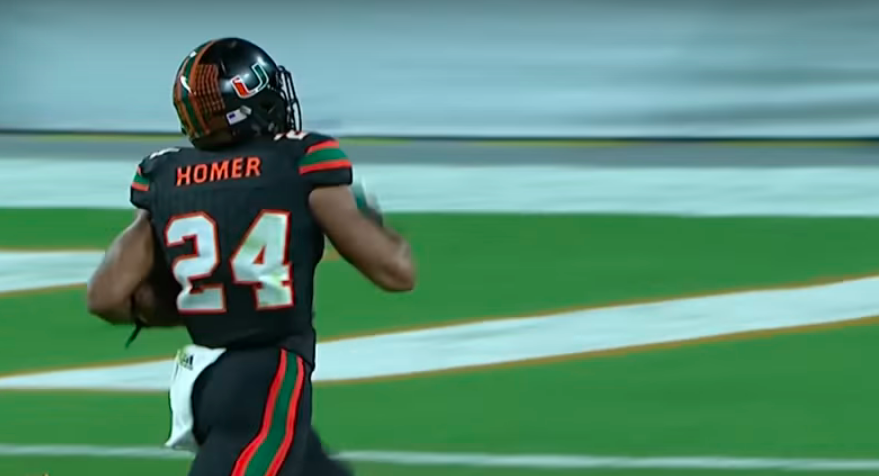 A Preview Of This Weekend’s Best College Football Games


College football fans are anxiously awaiting Week 11, praying the results may make the playoff picture a little clearer. Of course, there’s always a chance this week will just cause more of a mess, making decisions even tougher to make in the coming weeks. The excitement related to this week, however, is mostly due to six of the Top 25 teams facing off this Saturday. Week 11 is sure to be a treat for college football fans, with a handful of games to keep an eye on.

With its notable ranking, Notre Dame has been in question throughout their season. Are they all they are cracked up to be? Following their wins over USC and NC State, it is pretty clear Notre Dame means business this season. However, Miami took out Virginia Tech in last Saturday, 28-10, silencing their critics as well. These previous wins for both teams make this matchup one to watch this week, a battle between two of the best teams in the nation. Let’s not forget that Notre Dame vs. Miami is a top-tier rivalry of its own, so it’s safe to say both teams will bring their all to South Florida this Saturday. It’s worth noting Notre Dame has had the opportunity to play at home the past four out of five games, and might struggle to get back on the road for such a tough matchup. The Fighting Irish will make big offensive moves through the run game, relying on running back Josh Adams, as the junior’s name is part of the Heisman conversation, contributing to Notre Dame’s big wins versus USC and NC State with a combined 393 rushing yards. Miami, however, has their own great offensive weapon, quarterback Malik Rosier. In Miami’s successful matchup versus Virginia Tech, Rosier threw for 202 yards and ran for 84 more. Neither team has an easy week approaching and the game will be sure to have fans on the edge of their seats until the end.

Oklahoma hosts TCU after the Sooners beat out Oklahoma State in their 62-52 Bedlam victory last week. As always, the conversation surrounds quarterback Baker Mayfield and how he can keep the Sooners within reach of the top four and sitting comfortably in the top ten. The quarterback leads this powerhouse offense, which puts up some impressive numbers week by week ,including his 598 yards and five touchdowns against the Cowboys. The Sooners have put up at least thirty points during every game this season, except for their October matchup against Texas when they scored 29. And Mayfield has thrown at least two touchdowns in all nine games thus far, averaging over 300 yards per game.

TCU has an offensive scoring at least 24 points in each of their eight victories, and has a defense that has caused other teams to struggle to put up any points versus them. However, if ever there was a team to threaten this defense, it would be Oklahoma. If Mayfield can navigate this defense, this game is most likely to be a shootout. There’s a lot on the line in this one, as whoever pulls out the victory will likely be a lock to appear in the Big 12 title game, making fans eager to tune in this Saturday.

Most football analysts are calling this game the “lock of the week”, assuring fans that Alabama will destroy Mississippi State. Alabama is currently a 14-point favorite against the Bulldogs, probably because of the way Mississippi State took a beating back-to-back from Georgia and Auburn. However, Alabama’s defense is littered with injuries right now, perhaps making this game a closer call than it would normally be. For Mississippi State, dual-threat quarterback Nick Fitzgerald could be the key to a success versus the powerhouse that is Alabama football. Fitzgerald currently leads the team with 801 rushing yards and 12 rushing touchdowns, proving he can make plays both through the air and with his feet—something that could present a lot of problems for the Crimson Tide.

Mississippi State has found success this season when running the ball and focusing heavily on this during their offensive drives. However, with a number of linebackers dealing with injuries on the Alabama defense, Fitzgerald may have the opportunity for some plays down the field after play-action. Taking everything into account, the matchup between the Bulldogs and Crimson Tide is shaping up to have a far more interesting game this Saturday than Alabama’s 51-3 spanking on MSU last year.

The Georgia Bulldogs will travel to Auburn this week in an attempt to continue is currently undefeated season, but the Tigers are arguably one of the best teams best set up to put up a fight against Georgia. Auburn has some serious heat coming their way in the next two weeks, with #2 Alabama following the Bulldogs’ visit to Jordan-Hare Stadium, so Auburn is sure to be in tip-top shape, with the reminder that wins over these two teams could send them to the SEC Championship game. This team might have a bit of a chip on their shoulder, and the Bulldogs could be walking in with a little too much confidence based on their unbeaten record.

Georgia has been dominant lately, despite three of their last four games being too close for comfort and decided by one possession. However, let us remember that Auburn also lost to LSU and Clemson this season, making it hard to assume they have the chops to handle the “SEC bully” that is the Georgia Bulldogs this season. Georgia’s offense, specifically freshman quarterback Jake Fromm, will have to show why he’s the been one of the SEC’s best passers against a defense that will quickly shut down the Bulldogs’ run game. Stakes are high for this SEC matchup in what could be a thriller.