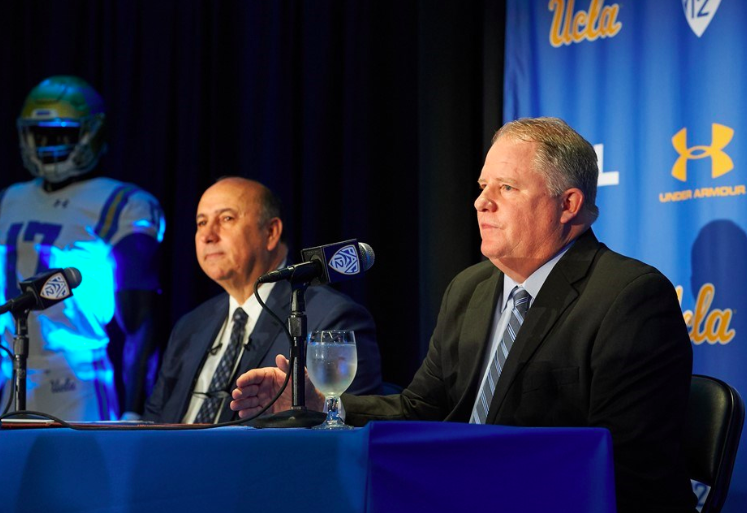 Chip Kelly’s Past Has Prepared Him For The Future


Chip Kelly was hired as head football coach of the UCLA Bruins on November, 25, 2017, and he will return to the sidelines this Saturday. But to see how he got there, we should start at the beginning.

The son of Paul Kelly, a 40-year trial lawyer in the state of New Hampshire, and Jean Kelly, Chip has been in coaching since 1988 when he was conditioning coach for the Nevada Wolf Pack. After two years, he joined Columbia’s staff as a special teams coach and a defensive positional coach (defensive backs in 1990, outside linebackers and safeties in 1991) before going back home to the University of New Hampshire, where he played his college ball.

In 2007, Kelly joined the Oregon Ducks as offensive coordinator. It took just two years in Eugene for Chip to get the lead job, and suddenly he was at the helm of a premier Pac-12 operation. Kelly went 46-7 with the Ducks, winning three conference championships, the 2011 Rose Bowl, and the 2012 Fiesta Bowl. Then, greatness came knocking again.

After deliberating for nearly two weeks following the Fiesta Bowl victory (he wouldn’t and still doesn’t consider any other job offers while still in the midst of a season) Kelly accepted the position—after originally declining—as head coach of the Philadelphia Eagles on January 16, 2013.

It didn’t take long for the fireworks to fly. In his first season, Kelly’s offense ranked second in total yards, fourth in points per game, first in rushing yards, second in rushing touchdowns, first in yards per carry, second in touchdown-interception ratio, and third in turnover percentage. The Eagles went 10-6 and won the NFC East.

On the other side of the ball, Philadelphia was 17th in scoring and had one of the best run defenses in the league (sixth in yards per carry allowed), which proves that a fast-paced offense doesn’t negatively impact the stinginess of the defense or overall toughness of a team. Instead, other factors led to the downfall of Kelly in the City of Brotherly Love.

First and foremost, a battle for control of personnel after the 2014 season—another 10-6 year for Kelly—led to a shakeup in the front office. It started when executive Tom Gamble was unceremoniously fired after two years with the team simply because he had a better relationship with the team’s head coach than Howie Roseman did. That forced Kelly to go to team owner Jeffrey Lurie and understandably attempt to seize control of the team’s 53-man roster. He was successful… or so it seemed.

Roseman stayed in the building and was “promoted” to executive vice president of football operations—an odd title for someone that no longer had any input in the football side of the franchise other than managing the salary cap. So, it wasn’t the signing of Byron Maxwell, or trade for Sam Bradford, or the inability to block on the interior that led to Kelly’s downfall; it was Roseman staying employed by the franchise with the expectation that he would regain control if Kelly failed in a couple years.

The team didn’t even give him one, as Chip was fired much less than a calendar year after taking dual responsibilities as head coach and general manager. He finished the 2015 season with a 6-9 record and wasn’t even afforded the opportunity to coach in Week 17 following two-straight ten-win seasons.

By the end of his tenure, the tight-knit team culture that Kelly wanted to establish was accomplished by bringing in the right personalities somewhat combined with a belief of togetherness against the head coach’s ways, as owner Jeffrey Lurie was asking players what they seek in a head coach before Kelly was even fired—and while the team was in the midst of competing for a playoff spot. Before the blood was even dry, Roseman was back in control of the Philadelphia Eagles.

That’s a stark contrast compared to the honor of the head coach, who took forever to accept the job in Philadelphia because of his immense loyalty to Oregon in 2013.

I know almost everyone has brought into the narrative that Kelly is bad and Roseman is a genius, but think about that. When, in the history of sports, has a general manager effectively been fired while staying in the building, keeping the ear of the team owner, and being re-installed as the franchise’s head decision-maker?

Of course, the franchise now has a Super Bowl to show for it, and maybe that makes it worth it. But if Kelly was that bad, it should have taken far longer than two seasons removed from him coaching the team to win it all. I mean, the guy won double-digit games  in two-of-three years with Philly.

Also, how is Doug Pederson—who did a phenomenal job with creative play-calling and in-game adjustments last season—winning with the Eagles any different than Jon Gruden winning with “Tony Dungy’s team” in 2002? That’s what people say, right?

Honestly, both assessments are unfair, but Kelly undoubtedly has some significant fingerprints on the Eagles as they are currently constructed.

Most importantly, getting rid of LeSean McCoy and DeSean Jackson was addition by subtraction. Off the field, it freed up cap space and got rid of two players with character concerns in regards to work ethic, attention to detail, and commitment to the team. From an on-field perspective, McCoy didn’t always hit the hole, take care of the football, or give the ball to the ref so they could play fast, while Jackson wasn’t very eager to take hits or fight for contested passes.

Even if he wasn’t a good judge of talent—which is blatantly false as will be explained shortly—Kelly was an excellent judge of character, and that was key in establishing a winning culture in Philadelphia. But let’s go back to the 2014 NFL Draft for a moment, which was perhaps the beginning of the end due to Howie Roseman’s ineptitude causing friction and leading to battle lines being drawn.

Then the team’s general manager, Roseman drafted Marcus Smith (No. 24 overall pick) in the first round and later traded up to draft Jordan Matthews (No. 42 overall pick) in the second round. Kelly, on the other hand, was notably interested in trading up for Odell Beckham Jr.—who went to the Giants at the No. 12 pick.

Smith recorded 6.5 sacks in four seasons (including last season with the Seahawks) and is on the edge of retirement.

Matthews has caught four touchdowns over the past two years and is currently a free agent.

Beckham Jr. just became the highest-paid wide receiver in the NFL with a five-year, $95-milion extension and is well on his way to Canton.

Unfortunately, the dishonest media declines to hold the right people accountable, often flat-out lying to place the blame on Kelly. And that angers me—and surely would anger Kelly if he had a Twitter account—more than anything else, as swarms of fans were quick to point the finger at the former head coach for the Smith pick when it was reported that he was likely going to retire. (Just look at the replies to the linked tweet from above about Smith’s imminent retirement.)

If people didn’t pay attention to fake news, they would know that the 2015 NFL Draft is the only one where Kelly had control of personnel, and with his first two picks, he drafted two starters from Super Bowl LII—Eagles wide receiver Nelson Agholor and Patriots cornerback Eric Rowe. In the third round, Kelly was universally panned for taking Texas linebacker Jordan Hicks, but he quickly become a playmaker in the middle for Philly, proving all the detractors wrong.

As for the most important position in sports, Kelly took a chance by betting on Sam Bradford’s health ahead of the 2015 season. Various fair-minded analysts—not to mention new Arizona teammates Larry Fitzgerald and Patrick Peterson—have called Bradford one of the best quarterbacks in the league when he’s healthy, so you can’t really blame Chip for trading away future Super Bowl MVP Nick Foles, who just didn’t bring the consistency that Bradford would on the field.

It’s no coincidence that the two-and-a-half games that Bradford missed in his lone season with the Eagles were the worst losses of the year—a blown lead against the Dolphins before being outscored 90-31 over the next two weeks by Tampa Bay and Detroit. It was around that time that Lurie also started being more hands-on with the players and asking what they looked for in a head coach. Anyone that doesn’t think that impacted the willingness to fight for Kelly—or that Kelly didn’t notice what was going on, especially with Roseman still in the building—is a fool.

So, on at least his fourth chance following the drafting of firefighter Danny Watkins, reach for Marcus Smith, and loss in a power struggle, Roseman finally had a championship roster, which was in large part due to the foundation laid—or a slate cleaned—by Kelly.

And it didn’t take long for Chip to get another shot either, as he was hired by the 49ers before the 2016 season. The New Hampshire native wasn’t expected to compete immediately with arguably the worst roster in the league to work with, but despite being fired after a 2-14 season, Kelly also had a lasting impact in San Francisco by keeping the team together through turmoil.

Things could have gone south in a hurry when Colin Kaepernick decided to protest the American flag during the national anthem, but Kelly handled the situation as well as anyone possibly could by keeping the team together. It was clear that he earned the respect of the players, and it showed when they embraced him on the practice field the day after his father’s funeral in December of 2016. The team was 1-11 at the time, and Paul Kelly was buried in 49ers gear.

Less than a month later, though, Chip no longer had a job when impatient team CEO Jed York decided to clean house.

Had Jimmy Garoppolo been traded to San Francisco a year earlier than he was, I have no doubt that the 49ers would have been a playoff contender in 2017 and a legitimate Super Bowl contender in 2018. But it obviously wasn’t meant to be, and Kelly will now try his hand back where he became a household name: coaching in the Pac-12.

Instead of the creative, ever-changing uniforms for Oregon, Kelly will be sporting UCLA’s historic blue and gold combination. What are the Bruins getting besides an intelligent, loyal, and proven head coach that lives and breathes football?

In Kelly’s first season opener with Oregon in 2009, the Ducks lost 19-8 to Boise State, and after the game, LeGarrette Blount punched a Broncos player in the face. That week, a Ducks fan emailed the team’s new head coach saying that he felt he should be refunded $439 for travel because of a disappointing performance.

It was never cashed, and instead the fan made a copy and sent it back to the former Oregon coach, while, in turn, becoming a devoted supporter.

There won’t be any wasted time turning UCLA into the powerhouse that the Ducks were, and bringing the Bruins back to prominence could lead to a second chance at the next level—similar to Pete Carroll’s journey. To be a long-term success in the NFL, though, Kelly might have to “play the game.”

I believe he’s already doing that by forming a friendship with former Bruins quarterback and Hall of Famer Troy Aikman, who said earlier this year that he will likely be interested in a front office opportunity in the future. If so, we could see Kelly attempting to win a national title over the next handful of seasons before he potentially returns to the league with a trusted personnel man to work with in Aikman.

Even if that doesn’t happen, I don’t think Kelly will be sending many checks to disgruntled UCLA fans in the foreseeable future.