Home / frontfootball / College Athletes Have Every Right to Sit 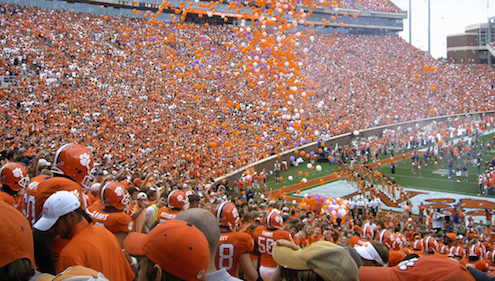 College Athletes Have Every Right to Sit


College football players, in particular LSU’s Leonard Fournette and Stanford’s Christian McCaffrey, have been criticized this week for choosing to sit out their bowl games and prepare for the NFL Draft. They are being called “selfish” and “not team players,” but it is extremely unfair—and hypocritical for some—to label them as such.

Why should guys ready to make a living in the NFL risk their own health for one more meaningless game? I don’t think anyone is really hurting by sitting out the Sun Bowl. Think about it; it’s not like they’re sitting out a playoff game or the national championship. Just last season, star Notre Dame linebacker Jaylon Smith suffered a potentially career-ending knee injury, and it caused him to fall from the #1 overall prospect to a second-round pick. Not only did he lose out on millions of dollars, but he may never play football again (it is still unclear if he will return as he deals with nerve damage in his knee).

The NCAA makes billions of dollars from their “student-athletes,” and do not care what happens to them as long as they are making money. So why shouldn’t the student-athletes look out for themselves? There is a simple solution that makes sense, but the NCAA is too greedy to oblige:

They should pay, in full, for any injury a player suffers that impacts their professional career. And that means career earnings. For example, if Leonard Fournette were to play in LSU’s meaningless bowl game and suffer a similar injury to Jaylon Smith, the NCAA would have to pay him as if he was a top-five pick in the NFL Draft. Plus, if he’s never able to get back on the field or return to 100% and live up to his potential, the NCAA would have to pay him top-dollar as if he was a superstar (which he projects as) for his second and third contracts—whether he is still hanging on in the league or not. Finally, they would need to give a large amount (say 10+ million dollars) for not being able to succeed at the game they love.

That seems fair to me. Players could get hurt and have their whole life changed—no Pro Bowls, no All-Pro selections, no Hall of Fame inductions. If there was no risk in playing in the bowl games, the NCAA would be fine with it, too.

Just don’t expect the NCAA to be so generous.