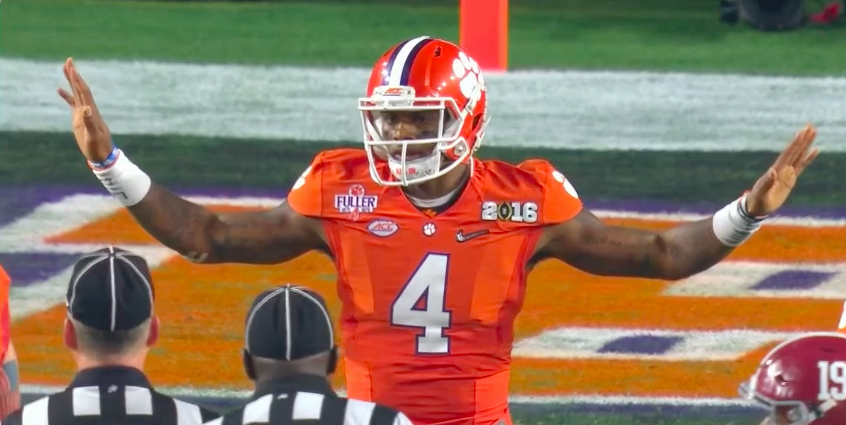 
It’s hard not to be a fan of Deshaun Watson. The current Clemson quarterback is on his way to his second straight College Football Playoff—the first starting quarterback to do so—and has helped take Clemson to the next level after they had so much success with Tajh Boyd, Sammy Watkins, C.J. Spiller and others.

Watching Deshaun Watson play quarterback for Clemson might give the impression that things come easy for Watson. He started as a freshman at Gainesville High School in Georgia, and has made things look effortless on the football field ever since. But not everything has been easy for Watson.

Watson was raised in a single mother home and lived in government housing for the early part of his life. He and his family got their first house when Watson was 11 years old, with help from former Atlanta Falcons running back Warrick Dunn and Habitat for Humanity.

Then when Watson was a sophomore in high school, Watson’s mother, Deann, was diagnosed with tongue cancer and he didn’t see her for months while she went through her treatment. Unfortunately, Deann lost her tongue, but Deshaun and his family battled through adversity and Deshaun Watson continued to perform on the field.

Deshaun gets a lot of his toughness and motivation from his mother, and it shows on and off the field. He’s a humble, high-class person, but don’t let that fool you—Watson will kill your defense on the football field.

Watson is 30-3 as Clemson’s starting quarterback, and one of the losses came in his freshman year when he left in the first quarter with a knee injury against Georgia Tech.

Deshaun Watson is a winner.

The star junior quarterback has a chance to take his team to a second consecutive National Championship Game if Clemson can defeat Ohio State in the Fiesta Bowl on December 31 (7:00 PM ET on ESPN). Watson also won a state championship in high school, has the career passing touchdowns, passing yardage, and all purpose touchdown records in the history of Georgia high school football, and has been a two-time Heisman finalist.

How the heck isn’t Deshuan Watson being talked about as an elite NFL prospect?

As a freshman, Watson tore his ACL in practice (he had sprained it in the loss to Georgia Tech) then told his coach Dabo Swinney that he was going to play in their rivalry game against South Carolina. Not only did Watson play, but he led his team to a 35-17 win over the Gamecocks and scored four touchdowns (two passing, two rushing).

Watson carved up Nick Saban’s Alabama defense for 405 yards (with 73 rushing yards) and four touchdowns in the 2016 College Football Playoff National Championship Game. We’ll use that game to showcase some of the things that make Watson a great NFL prospect.

This run on a 3rd-and-6 is tough to stop. It’s always a plus when your quarterback can get a first down with his legs when his reads are covered.

On the next play, Watson throws a strike to Hunter Renfrow for a touchdown. Watson rolls right on the play design, then sets his feet to step into a perfect pass.

Watston can also throw on the run without setting his feet like the above touchdown. On this play, Watson pump fakes—another thing that he’s very good at, holding the ball with his huge hands (similar to Russell Wilson)—then runs into some pressure but stays composed and scrambles right to throw a ball down the sideline where only his receiver can catch it.

On his second touchdown, also to Renfrow, Watson just stands in the pocket and reads the defense before throwing a low ball to Renfroe in the endzone where only he can get it.

Again, Watson gets a first down with his legs. It was a good pass rush by Alabama, but Watson turned it into a big play for Clemson. This play must have driven Nick Saban—and will drive any coach—crazy.

Watson can also run on designed runs, similar to Cam Newton, Russell Wilson, Alex Smith and others that have occasionally ran zone reads in today’s NFL.

He can do it all.

Deshaun Watson should easily go in the top five of the 2017 NFL Draft, but that’s not the narrative right now.

He has a career 67.7% completion percentage and is averaging 8.8 yards per attempt in his three years at Clemson. Watson had nearly 10,000 yards passing, with 86 touchdowns, and he also rushed for over 1,000 yards in his junior season and has 23 career rushing touchdowns.

The only slight knock on Watson is he has thrown 13 and 15 interceptions in the past two seasons, but he has thrown for 35 and 37 touchdowns in those two seasons. For comparison, former number one overall pick Jameis Winston threw 18 interceptions (with only 25 touchdowns) in his final season at Florida State with 20 less attempts than Watson. Not many people had questions about whether Jameis Winston was worthy of going high in the 2015 NFL Draft (I thought Mariota was a clearly superior prospect).

I really like Jared Goff, but how are he and Carson Wentz considered far superior prospects to Watson?

Wentz played at North Dakota State—against much less competition than Watson—and averaged 8.4 yards per attempt and a below 64% completion percentage in his one-plus year as the starting quarterback.

Watson started over two full seasons for Clemson, is a back-to-back ACC Champion, owns a 30-2 career record in games he starts and finishes, and has been to two College Football Playoffs. So why isn’t he being talked about the same way Wentz and Goff were last year?

At the 2016 Heisman Trophy Presentation, Tim Tebow asked Watson about the chip on his shoulder Watson told Tebow about last year, and asked if Watson still had it. Here’s what Watson had to say:

“I do, I do. I feel like, you know, all the hard work I put in, I don’t really get recognized as much as others. But I always have a chip, regardless of how big the success is.”

I believe that Deshaun Watson is clearly an elite quarterback prospect in the same class as Andrew Luck and Marcus Mariota, and should go in the top two of the 2017 NFL Draft.

Others should start recognizing him as such.