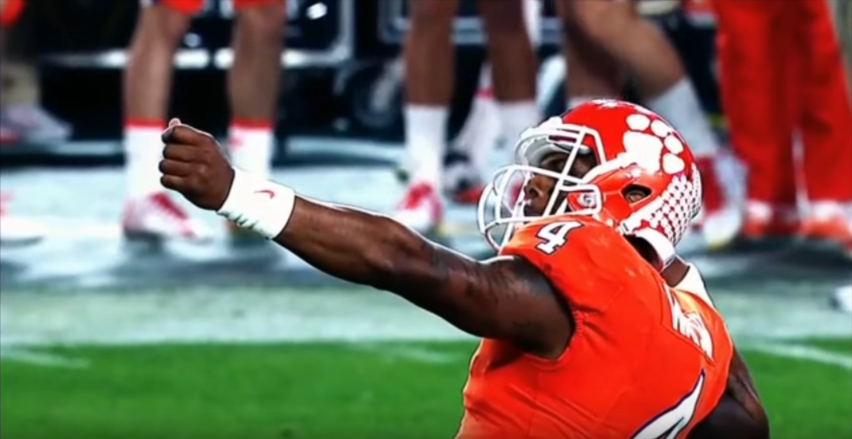 Deshaun Watson is a Legend


There have been many great players over the near-150-year history of college football. With legends like Herschel Walker to Tim Tebow, it is hard (and perhaps unfair) to pick out the best college football player of all-time. There is no right answer to the discussion, but one thing is clear: Clemson’s Deshaun Watson belongs in that conversation.

Watson is off to the NFL after three great seasons for the Clemson Tigers, and his three years in college are about as good as it gets.

As a true freshman, Watson put a cap on his season when he played with a torn ACL against South Carolina and scored four touchdowns (two rushing). He convinced his head coach, Dabo Swinney, that he could play in the game, further cementing his leadership—and respect from his teammates—as a freshman. After the win against South Carolina, Watson had ACL surgery and had to watch his team win the Russell Athletic Bowl against Oklahoma without him.

He then would go on to have one of the greatest runs in the history of college football.

Again led by Watson—coming off a torn ACL—in 2015, Clemson had a perfect 12-0 regular season (8-0 in the ACC) to win the ACC Atlantic Division. Clemson played North Carolina in the ACC Championship, and Deshaun Watson showed up with five touchdowns in their 45-37 victory.

Clemson was ranked No. 1 in the nation and made the College Football Playoff for the first time.

Down one point at halftime to Oklahoma in the Orange Bowl, Clemson did not panic and they outscored Oklahoma 21-0 in the second half to lock up the win. Deshaun Watson and Clemson were headed to the College Football Playoff National Championship against Alabama.

Watson and the Clemson offense put up 40 points against the nation’s best defense in a losing effort. The superstar quarterback had 405 passing yards and four touchdowns, with 73 rushing yards in the 45-40 loss to Bama.

As a true sophomore, he could not go to the NFL anyway, but Watson surely had unfinished business at Clemson.

The Clemson Tigers were back in 2016 College Football Playoff. Along the way, Watson and the Tigers toppled then-No. 3 Louisville, and No. 12 Florida State. For the second straight season, Clemson was the ACC Atlantic Division Champions.

Clemson had a dominant performance in the Fiesta Bowl versus Ohio State. They won 31-0, shutting out an Urban Meyer-led team for the first time in his coaching career. Alabama fairly easily took down Washington in the Peach Bowl earlier on New Year’s Eve, so Clemson’s win set up a rematch of the previous season’s classic.

The game certainly lived up to the hype. Down the entire game and by as many as 14 points (10 in the second half), Clemson stayed calm throughout. And Deshaun Watson came up clutch.

In the third quarter down 17-7, Watson even had a perfect pooch punt to pin Alabama inside the five-yard-line, which set up great field position for a 42-yard touchdown drive to get Clemson going after the defense forced Alabama’s offense into a three-and-out.

With under seven minutes to go, Watson drove his team 88 yards down the field for a touchdown to put Clemson ahead for the first time in the game. Then Alabama answered back to go back ahead, 31-28. The game could have ended right there—it was already a classic. There was only one problem:

Deshaun Watson had 2:07 left on the clock.

It wasn’t enough to lead one go-ahead drive in the fourth quarter, but Watson went ahead and drove his team down the field again. You know the story by now. Watson to Renfrow with one second left.

The final two drives against the best defense in the country are among the most clutch moments in the history of sports. Deshaun Watson was reminiscent of Tom Brady, showing he has ice in his veins.

To recap, Deshaun Watson is a back-to-back ACC Champion, two-time Heisman Finalist, holds a 32-2 career record in games he started and finished, is 3-1 in bowl games, played in two National Championships, and beat Alabama to help Clemson win its first National Championship since 1981.

Like Rocky Balboa, there is no doubt about it:

Deshaun Watson is a legend.