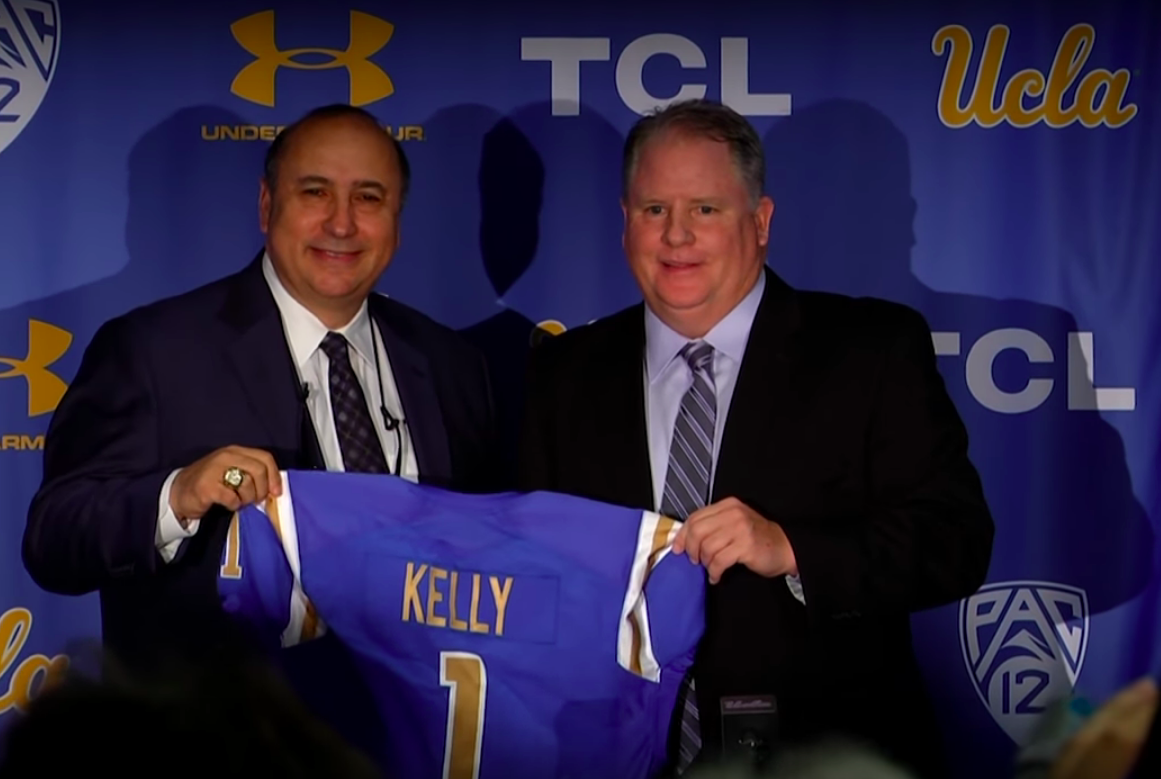 
Today, UCLA introduced Chip Kelly as their next head football coach—the 17th in school history. There were reportedly over 200 people—boosters, alumni, reporters, and otherwise—in the room, and the excitement over the hire of Kelly is evident. UCLA great Troy Aikman, who was a big part of the search committee to target and hire Kelly, spoke after the press conference and is clearly optimistic about the hire. And after Kelly knocked the press conference out of the park and gave some insight into his mindset as a person and a football coach, there’s certainly reason for optimism for those not aware of the former Oregon and NFL coach. Here are some of the best quotes from the press conference, which can be viewed here.

“Not be a lot going on in LA today, I can see from this crowd.” The coach that Eagles owner Jeffrey Lurie inexplicably said had no “emotional intelligence” (whatever that means), immediately showed he has a sense of humor and personality.

“To be aligned with the right people is the most important thing.” Frankly, the two previous jobs he had did not have the right ownership. The search committee for UCLA sounds like it does.

“That’s also the longest I’ve talked in my life, so.” After his introduction, Kelly wittingly added that before the Q&A started.

“I think sometimes your hubris can probably get the best of you, and you say, ‘Well I’ll just go there and change everything’ where sometimes it’s a lot easier when everybody’s already rowing the boat in the right direction.” Hindsight is 20/20 and he might have felt it was a fit at the time, but the situations in Philadelphia and San Francisco didn’t work out because of toxic people in those organizations.

“No, all those players graduated, so.” When asked about having the same type of offense he had at Oregon.

“We’re not going to say, ‘In two or three years, when we get our guys in here.’” I met with my guys today.” The players currently at the program and recruits should love to hear that. The team is a family, and if you’re a part of the team you’re a part of the family. Keep in mind the way Kelly handled the LeGarrette Blount situation at Oregon, when Blount punched a Boise State player—Blount is still having a very good NFL career that wouldn’t be possible if Kelly just kicked him out of the program.

“I’m there to assist in any way if I can help those guys, but especially those seniors, because I won’t get an opportunity to coach them, but those guys deserve to go out the right way.” Again, players are going to love to hear that stuff, and Kelly has a great outlook on everything.

“We all have to remember the student-athlete experience is the main thing, and let’s keep the main thing the main thing.” There’s no doubt Kelly wants to win, but he knows it’s about the young men that are about 18-22 years old. And for most of them, UCLA will be the last time they play football.

“I actually did, but no one paid attention to me.”  Kelly, saying that he did live and breathe the game every day during his year-absence from coaching.

“For you to grow as a person you have to get out of your comfort zone. So I got out of my comfort zone by joining the media.” Much of the media probably thinks they know more about football than Kelly, so you can’t blame him if he didn’t like dealing with some know-it-all media members throughout the years.

“I think the only expectation that you can have is what people do on a daily basis.” When asked about his expectations at UCLA. Kelly clearly has a growth mindset, not unlike someone like Tom Brady. If they take care of business every single day, they’ll be where they want to be.

“I’ve never been a comparison person. Teddy Roosevelt said comparison is the thief stealing your joy. So it’s not worrying about that. What we really want to look at is how are we going to get better every single day and how do we compete with ourselves?” Kelly once said, “run from being good. Chase being great.” Comparisons shouldn’t matter if you personally attempt to go from good to great.

“There was a great coach that said, “be quick, but don’t hurry.” That great coach, was of course, UCLA’s John Wooden.

“I’d like to be able to just stay in the Luskin Center. I’ve heard it’s expensive to live here, so if we could work out a deal where I could just stay in the Luskin Center, that would be great. We could put ‘Luskin’ on our back or on the sideline or something. So when you talk about a football set-up, when you have a hotel, a practice field, and an office all within like 200 yards, I think it’s the best in the country.” Kelly got some applause after that one. The UCLA fans, donors, and recruits will love to hear that.

Chip Kelly basically shared more wisdom in under 30 years than you’ll get from most people in 30 months. UCLA’s new football coach is a great articulator and is clearly one of the most impressive guys you’ll hear speak. And he’s a darn good hire for the Bruins.