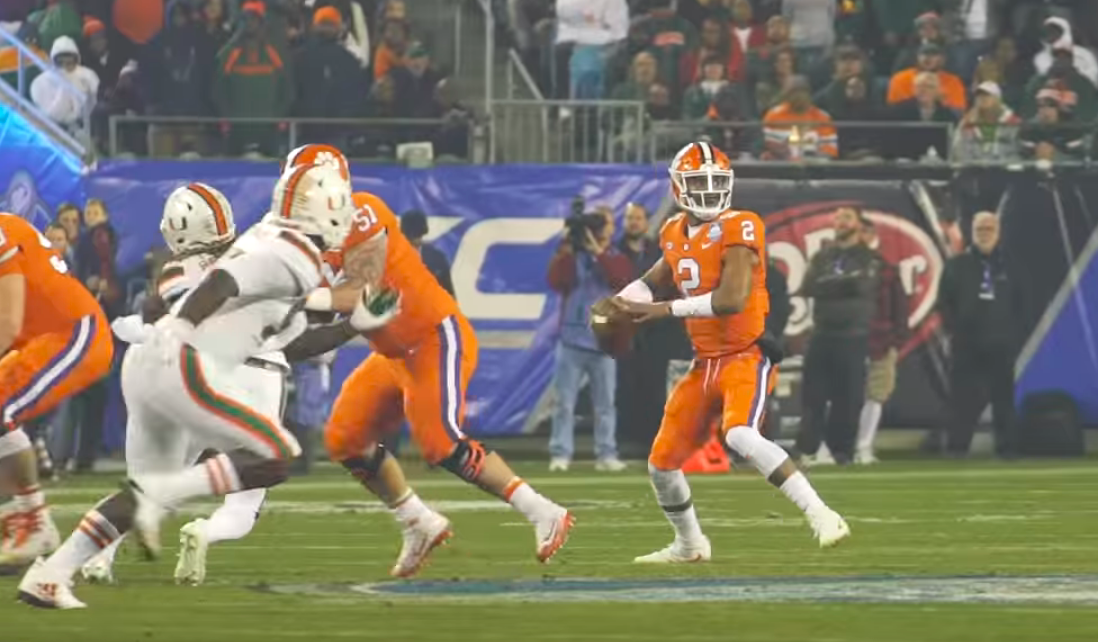 
There have already been some very entertaining games this bowl season, but things should get a lot more exciting starting today through New Year’s Day. We’ve ranked the ten best games to watch over the next several days, including the two College Football Playoff games.

The best part about this matchup for NFL fans is probably seeing Oklahoma State quarterback Mason Rudolph and his top receiver James Washington—both hopeful first-round picks—play in their final college game. Tonight’s Cactus Bowl between Kansas State and UCLA was close to being on the list, but Bruins quarterback Josh Rosen (concussion) is not expected to play in the game.

Heisman finalist Bryce Love headlines the Alamo Bowl between Stanford and TCU, but this is also a big battle between the Pac-12 and Big 12—conferences that seem to be fighting for one Playoff spot annually. Both teams are balanced and well coached, making this a potential nail-biter.

You might think of a high-powered offense when you think of Mike Leach’s Washington State squad, but they’ve been playing some very good defense in 2017. And we know Mark Dantonio’s Spartans always play strong defense. On the offensive side of the ball for Michigan State, keep an eye on sophomore quarterback Brian Lewerke, who has the look of a potential top pick in the NFL draft in a year or two.

LSU has a top-15 defense in terms of both scoring and yardage, and they should give Notre Dame all they can handle in the Citrus Bowl. Look for the Tigers to try and stop Josh Adams and the running game of the Fighting Irish, and look for Notre Dame to try and do the same against Derrius Guice. Guise is a load of a runner and potential first-rounder in the 2018 NFL Draft, so he’s someone to keep an eye on for NFL fans.

The playoff-hopeful Miami Hurricanes dropped two straight, including a blowout win in the ACC Championship against Clemson, while Wisconsin was undefeated all season until a close loss in the Big Ten Championship against Ohio State. They’re both well-coached teams that’ll look to end the season on a high-note instead of on a losing streak. Miami is missing a couple of its top weapons on the outside on offense, and hopefully the long layoff helped the unit figure things out. Whatever happens, both teams should be proud of their ouststanding seasons this year.

Auburn is unsurprisingly a heavy favorite to take down the non-Power Five UCF Golden Knights in the Peach Bowl, but there’s something special about the underdog team in Florida. Scott Frost took the head coaching job at his alma mater Nebraska, but he’s still coaching UCF in a unique situation that shows the comradery within the entire program. Gus Malzahn coaches an excellent Auburn team led by Kerryon Johnson and a stellar defense, but this probably won’t be an easy one for them.

Washington and Penn State both have two losses, but they would probably compete and have a real shot at a national title if they were inserted into the four-team Playoff. The Huskies were in the field last season, and the Nittany Lions probably should’ve been last season after they won the Big Ten. This could be a classic bowl game with two really good teams, and it could be the last time we see superstar running back Saquon Barkley play for Penn State.

This year’s Cotton Bowl is about as big of a matchup as possible without it being a College Football Playoff game. It features two conference champions from two of the best programs in the country. USC holds a seven-game win streak over Ohio State, but the last time the two teams played was in 2009. Senior leader J.T. Barrett is playing in his last game for the Buckeyes, and he’s had one of the best careers in the school’s history. On the other side, Sam Darnold could be playing his last game for the Trojans if he decides to declare for the 2018 NFL Draft. Make sure you tune in for this one.

The first Playoff matchup on New Year’s Day is huge on so many levels. Obviously, the biggest thing is getting a spot in the national championship game—but it’s also the SEC champion against the Big 12 champion, offense versus defense, and two big-time programs facing off. And on more of an individual level, Baker Mayfield is looking to cement a draft stock that appears to be skyrocketing against an elite Georgia defense.

It’s pretty easy to be hyped about Alabama and Clemson playing in the College Football Playoff for the third time in three seasons. This time isn’t in the title game, but it’s still a rubber match of sorts between perhaps the two most successful college football programs over the last several years. While Alabama has lost the last three times they’ve been in the Sugar Bowl, they have a totally different team than their last loss in 2014, so that shouldn’t matter much. It might come down to the quarterbacks—Clemson’s Kelly Bryant and Alabama’s Jalen Hurts—as whoever makes plays against the elite defense on the other side of the ball could be the difference in the game.