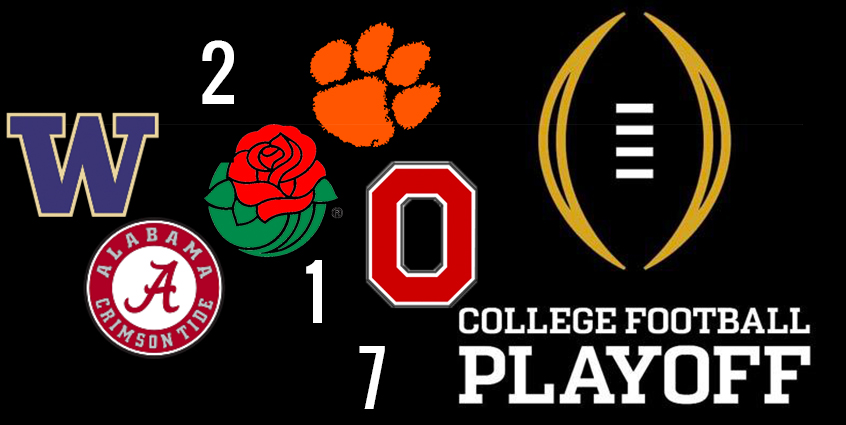 
With bowl season in full swing, and many of the higher profile bowls coming up, here is our list of the top ten must-see games.

The Alamo Bowl should be a good one, as it features the sixth lowest combined ranking (CFB Playoff Rankings) among bowl games. Oklahoma State quarterback Mason Rudolph has 25 touchdowns and just four interceptions on the season, and will face Colorado’s defense that is top 20 in both scoring defense and total defense. Oklahoma State’s offense is ranked first offensively in both those categories.

Miami has a top 20 defense to go along with Brad Kaaya, who may play his final game for Miami if he declares for the NFL Draft. After going through a four-game losing streak in middle of the season, Miami brings a four-game winning streak to the Russell Athletic Bowl. West Virginia will try to go 11-2, with their only two losses of the year coming against Oklahoma State and Oklahoma.

Stanford running back Christian McCaffrey won’t play for Stanford in this game, as he declared for the NFL Draft and will focus on that, but this should still be a good one between Stanford and North Carolina. Stanford had national title aspirations before the season, so we’ll see how they come out in the Sun Bowl. North Carolina Mitch Trubisky is regarded as a good NFL prospect, so he will be someone to watch in this game.

Not much needs to be said about this game except that Heisman winner Lamar Jackson will be playing. Jackson looks like a Ferrari when he’s on the field, and it’ll be fun to see him take Louisville’s number two scoring offense (45.3 PPG) against LSU’s number six scoring defense (16.4 PPG).

Two Heisman finalists (Oklahoma’s Baker Mayfield and Dede Westbrook) are in this game, and they alone are worth watching the game for. In recent years, Auburn has been known for Gus Malzahn and his offense, but they have the number five scoring defense this year. The Tigers have a tough task trying to slow down Mayfield and Westbrook.

Western Michigan will try to cap off an undefeated season against Big Ten Championship runner-up, Wisconsin. The Broncos haven’t beaten any undefeated teams and are over-touchdown underdogs against the Badgers. Western Michigan might not be able to stop Wisconsin on the ground, and will likely need to do the little things right to win the game—they’re undefeated for a reason, though.

Two of the best teams led by two of the best coaches in the country should lead to a recipe for a great game. Many people argue that Michigan is one of the top four teams in the country, so they’ll likely be determined to show that in the Orange Bowl. The Wolverine’s number one task will be to stop Florida State running back Dalvin Cook.

“The Granddaddy of Them All.” It’s fitting that this game is the only one without a title sponsor in the name of the bowl, and that it’s two of college football’s most prestigious programs—one out west and one in the east. Many people thought Penn State got snubbed from the playoff and was playing as well as anyone in college football, and others also thought that USC was playing as well as anyone late in the season. This could be a classic.

Jake Browning and his 42 touchdown passes will face the biggest test of the season—Alabama. Bama is ranked number one in both scoring defense and total defense, but Washington’s defense is no slouch as their top eleven in both categories. Alabama had a non-offensive touchdown in a mind boggling ten straight games this season; Washington can’t allow Alabama’s special teams or defense score against them.

These two teams rank top 25 in total offense, scoring offense, total defense, and scoring defense, and are led by two quarterbacks that have won a lot of games in their college careers. Ohio State and Clemson lost their two combined games by a combined four points. This game is in the late time slot on New Year’s Eve for a reason.