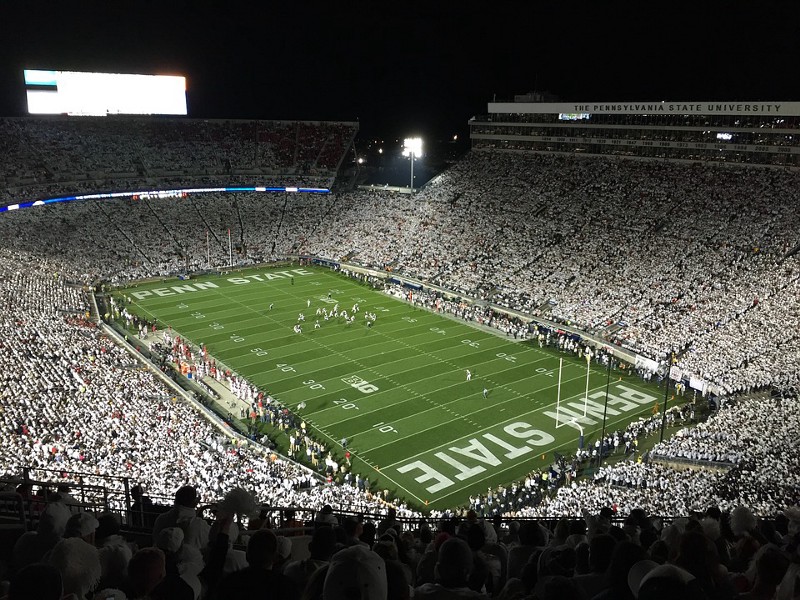 
This will be about the extent of the fashion we will cover here on White Wolf. Anyway, here are our top ten uniforms in college football.

This was a relatively easy choice. The Penn State uniforms are simply classic. Blue and white is all that’s needed to make the Nittany Lions have the best uniforms in college football.

USC is similar to Penn State, in that their uniforms are classic. They have been updated a little more, especially in recent years, but the distinguished design has remained intact.

Some people may argue Oregon should be #1 on the list. They have countless uniform combinations, many of which are excellent. It doesn’t hurt that Nike co-founder Phil Knight went to Oregon.

This season, Michigan became the first football team to use Jordan branding. They were with Adidas since the 1990’s, but made the switch back to Nike (Jordan) in 2016. Of course, they also have their trademark winged helmets.

Maryland is almost to Under Armour as Oregon is to Nike. They have many different uniform combinations, and somehow incorporate their state flag into their uniforms—whether it’s through the helmets or shoulder pads.

Michigan State also has some simple uniforms, but also implement sort of a Spartan look to it. The font for both the name and numbers is somehow reminiscent of ancient civilization. The Spartan logo on the helmet only adds to the combination.

Who doesn’t love Duke’s blue? It looks so fresh with the white. Sorry Duke fans, but North Carolina is above you on this list; although, for basketball uniforms it would be a different story.

Tennessee’s uniforms have remained consistent throughout the years. They recently added the “Smokey Grey” uniforms to their repertoire, which have been a huge hit. Tennessee also does a great job of the subtle checkerboard patterns in their uniform, to match their home endzones.

This might have been the toughest one to decide. We could’ve went with Texas, Stanford, Alabama, or a number of other schools. (Alabama wins enough, so let’s just keep them off this list.) With Sooners on their chest and OU on their helmets, we went with Oklahoma.