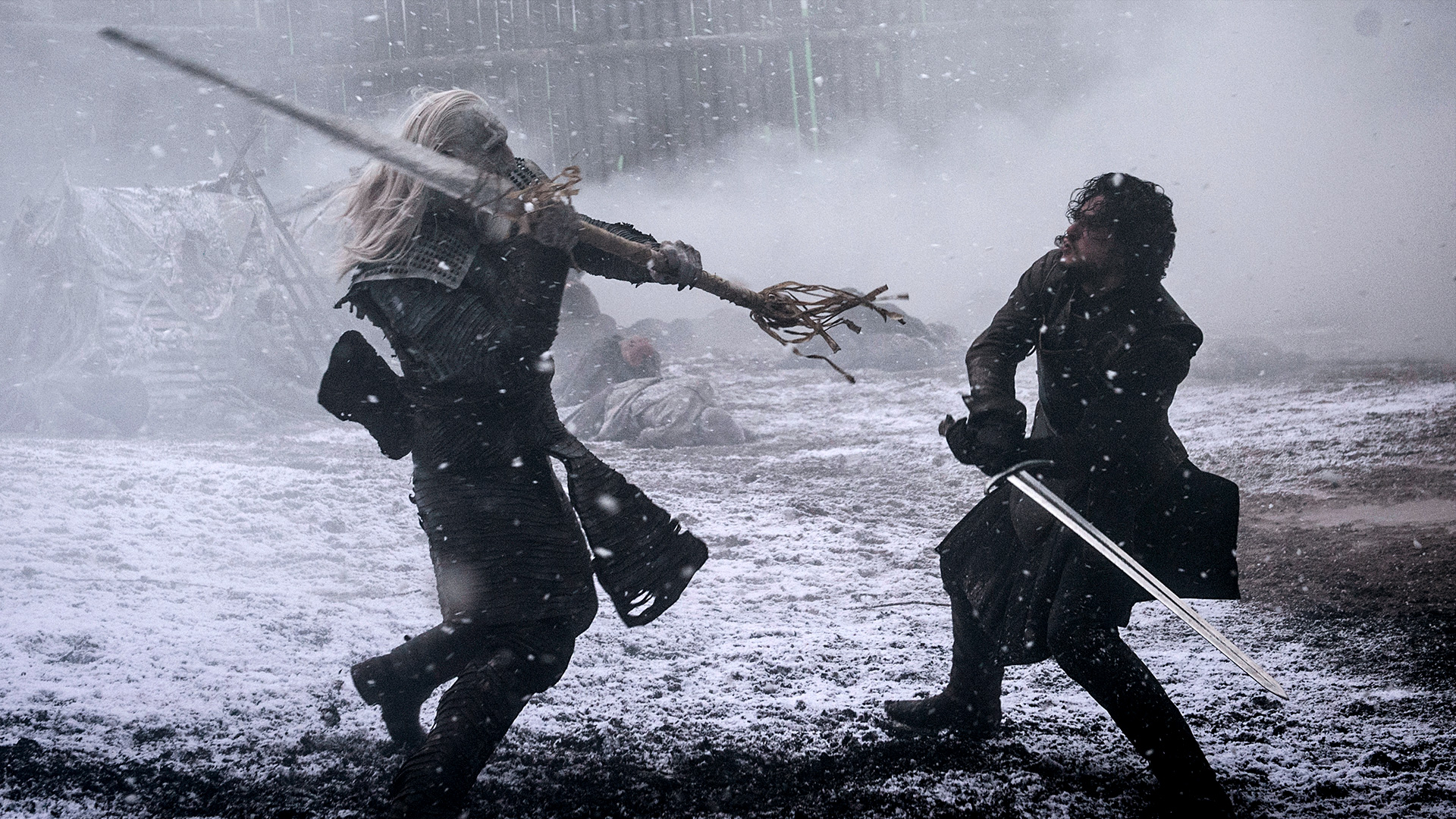 
One. Week. Away. Game of Thrones returns for the penultimate season next Sunday, and our countdown today will be a ranking of the top moments through six seasons. There will be some really great scenes left off the list, but here it goes. [Note: there will obviously be SPOILERS for the first six seasons of ‘Game of Thrones’ and some clips may be NSFW]

Only death can release you from your vows, and Jon takes advantage of that after being murdered and brought back to life. He executes those he betrayed him first, though, and walks away knowing he gave all he could—literally—during his time as Lord Commander of the Night’s Watch.

The vision Daenerys had in the House of the Undying could have a lot of foreshadowing in it. The most prominent of which is the snow falling in the Throne Room, and more importantly, snow on the Iron Throne. That could either mean White Walkers will march on King’s Landing, or that Jon Snow is the rightful King of Westeros. It was also telling that Dany never touched the Iron Throne, instead following the call of her dragons.

Would Jon Snow really die again after coming back to life earlier in the season? You wouldn’t think so, but his fate was certainly in doubt at the bottom of the pile as the Bolton army surrounded Jon’s army. Because it’s Game of Thrones, it was an intense moment that we weren’t confident the hero would get out of. The cinematography was very similar to Daenerys being lifted in the final scene of Season 3.

Jaime Lannister certainly made things difficult for Robb and Catelyn when he was their prisoner, and it led to Lord Karstark taking matters into his own hands and killing two Lannister boys for vengence. The King in the North acted like his father and sentenced him to death, but not before Lord Karstark disrespected Robb with his final words.

The biggest moment in Season 3 for Daenerys was freeing the Unsullied and giving them the choice of whether or not to fight for her. Being the charismatic leader that she is, a powerful speech kept the former slaves together, and Dany suddenly had not only three dragons, but also an army. It was cool to see the kind of damage a still-growing Drogon could do.

As much as most people dislike Littlefinger, it was kind of satisfying to see him push his new wife through the moon door because of how crazy she was. The calculating Baelish knew Lysa was too unstable to be trusted, but he might have gone a little far by admitting that he only loved her sister throughout his whole life; it couldn’t have been a good final thought for Lysa as she fell to her death.

The closer Dany gets to Westeros, the more epic her scenes seem to get. She proved that her—not her dragons—are what inspires people to follow her, as Daenerys makes her biggest move yet by killing the Khals and having all the Dothraki kneel before her. Even Daario Naharis, who saw Drogon save the day in the fighting pits, looks more amazed than ever by what the Mother of Dragons did sans her dragons.

The acting in this scene made it among the most tragic in Game of Thrones history, despite the fact that we all know how much of a monster Joffrey was. Viewers were even reminded just how bad of a person the boy King was by his treatment of Tyrion at the wedding, but it was still a brutal way to go. It was also shocking because it happened so early in the season.

An underrated moment from the series was the reveal of Bran and Rickon being alive. It was a relief to see them still whole, but also heartbreaking that Bran heard about Theon killing and burning the farmer’s boys to pass them off as the Stark children. The emotion and music of the final shot showed that even at a very young age, Bran is a Stark through and through.

Has there been a quicker turn of events than the end of Tyrion’s second trial by combat? It looked like Oberyn was well on his way to dismantling the Mountain, but his need for retribution and some cockiness caused his guard to go down and his face to get… crushed. The look on Tyrion’s face said it all.

The return of Jon Snow was executed perfectly, as it was suspenseful and uncertain before nearly being hopeless as everyone left the room. Then, Ghost woke up, and shortly after, Jon was back from the dead. The short few seconds of the hero catching his breath should have given viewers the chills, and the score as the credits rolled evoked a feeling of triumph and hope.

Basically all best moments in Game of Thrones makes the viewer feel something, and this is similar to Jon Snow’s resurrection in that all hope looks to be lost, but here, Drogon senses Daenerys is in danger and saves the day. This moment also brought Tyrion fully on board, as it is hard not to want to be on Daenerys’ team after seeing her exit a perilous situation on a dragon.

This is where many people realized, “alright, this show is for real.” Littlefinger putting a dagger to Ned Stark’s neck was a shocking and consequential blow to the “good guys,” and proved that Baelish is an opportunistic snake that cannot be trusted. It is a shame that Ned was out of his element in King’s Landing just because he was too honorable.

Being betrayed by Shae causes Tyrion to break the deal that Jaime made for him to live out the rest of his days at the Wall, and Tyrion does the only thing he feels he can: demand a trial by combat. The staredown between Tywin and Tyrion is certainly a memorable one, and Tyrion takes great pleasure in having ruined his father’s deal.

Robb Stark looked destined to march on King’s Landing and win independence for the North after his men declared him “The King in the North,” but unfortunately, we know that doesn’t happen. Still, it was a powerful scene that showed the death of Ned Stark will not be forgotten.

As uplifting as Robb being declared “The King in the North” was, Shireen’s death by fire was just as heart-wrenching. Stannis sits stone-faced as his daughter is burned alive, but we can see the emotion in his eyes, and while Selyse seemed to be an actual Lord of Light fanatic, even she breaks when she hears Shireen’s screams.

Daenerys’ moments have gotten more large-scale as seasons pass, but her first big moment was the best through 60 episodes. The dragon eggs that were given to Dany as a wedding gift were not supposed to be able to be hatched, but that is exactly what happens in the final scene of Season 1. Not only were three baby dragons born, but so was the Mother of Dragons.

A lot was packed into this one moment, and it is probably the saddest in Game of Thrones history. Hodor is born and dies in the same scene and all Bran could do was watch (in the past) and all Meera could do was run (in the present). The gentle giant Hodor sacrificing himself was one of the most heroic moments in the entire series.

Most of these moments at the top of the list give the viewer goosebumps because of how great they are, and Tywin Lannister entering the Throne Room after defeating Stannis is no exception. Cersei is just about to mercifully end Tommen’s life (and possible her own life) thinking that enemies are at the door, but it was Loras Tyrell followed by Tywin proclaiming, “The battle is over. We have won.”

It was thought that Jon Snow was safe after escaping Hardhome alive, but the final scene of Season 5 shocked everyone when Jon’s “brothers” labeled him a traitor and murdered him right at Castle Black. The camera staying on his dead body for a while was just so the viewer could take in the moment, but it kind of seemed as if he eyes might freeze over and turn into a White Walker. Good thing that didn’t happen.

This could easily be anywhere in the top five, including first, and some people probably feel that it should be. The build-up of the opening scene in “The Winds of Winter” is unprecedented, and it ends with Cersei destroying almost all of her enemies in one place at one time. The score, the acting, the cinematography, and everything about this scene is simply amazing.

If you didn’t think this show was for real after Littlefinger held a dagger to Ned Stark’s throat, this moment should have sold you. The main character of a show just isn’t supposed to die in the first season, but Game of Thrones set a new standard, and no one has been safe since.

While “The Winds of Winter” was a long, tension-building opening scene, “Hardhome” had a long, absolutely-chaotic ending scene. The entire “battle”—including Jon killing a White Walker—was spectacular, but the Night King showing how powerful he is as he stares down Jon and company sets the stage for the war still to come between the living and the dead.

This scene includes the reveal of Jon’s true Parentage, as the transition from baby Jon is to older Jon is beautifully done. Jon Snow has been accepted before (he was voted Lord Commander of the Night’s Watch after all), but not like this. The northern lords—and of course Lyanna Mormont—embrace Jon like he has always wanted to be embraced… as a Stark, and he is declared the new “King in the North.”

The worst/best moment in Game of Thrones somehow topped Ned Stark’s death as the most shocking moment of the series. Shortly after Robb learns that his wife wants to name his unborn son Eddard after his father, the doors shut and Walder Frey’s men attack the Stark army, killing Talisa by stabbing her in the stomach and shooting Robb with arrows. Still, after Catelyn takes Walder Frey’s wife as hostage, there seems like a chance Robb will escape, and it’s not until Roose Bolton puts a knife in his King’s heart that hope is officially lost. The chilling final shot of Catelyn getting her throat cut before cutting to black ended perhaps the greatest television scene of all time.