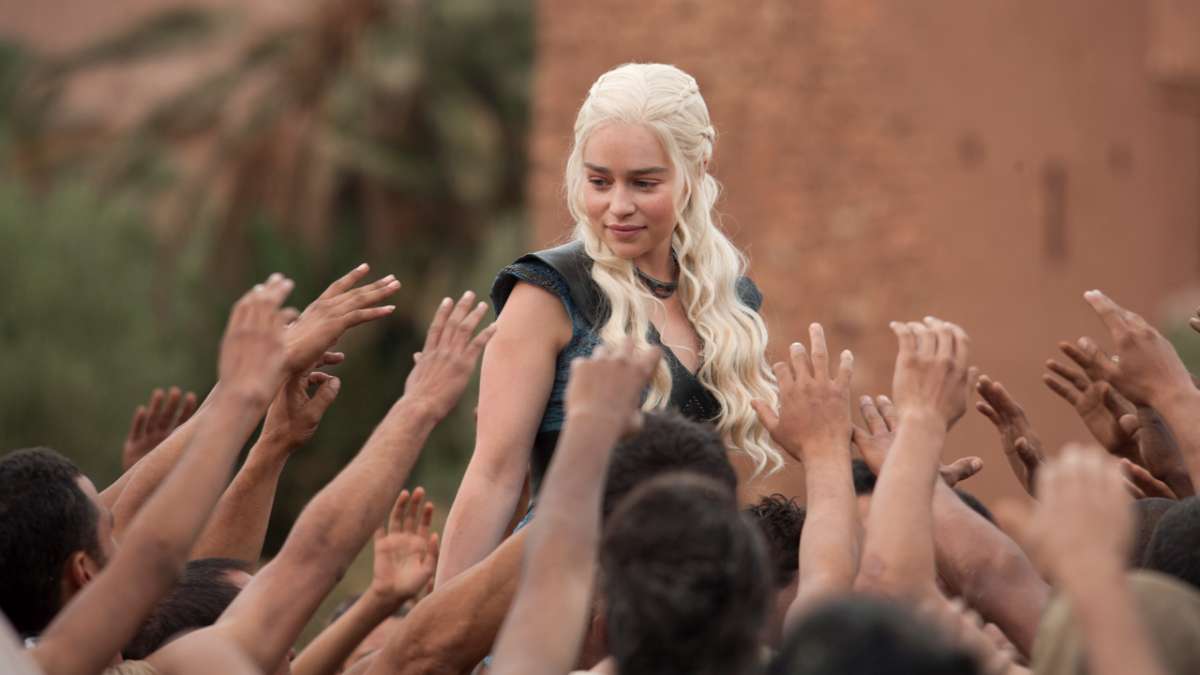 
Previous Episode: “The Rains of Castamere”

Season Three Finale. Joffrey challenges Tywin. Dany waits to see if she is a conqueror or liberator.

Game of Thrones knows how to end its seasons, and “Mhysa” delivers an awesome moment for Daenerys Targaryen. At first, Missandei speaks on behalf of Dany to the freed Yunkish slaves, but the Mother of Dragons then decides to speak for herself from the heart, giving a powerful and emotional speech that states: “You do not owe me your freedom. I cannot give it to you. Your freedom is not mine to give. It belongs to you and you alone. If you want it back, you must take it for yourselves. Each and every one of you.” After a brief absorption of the speech, the crowd started chanting “Mhysa,” which Missandei says is Ghiscari for “mother.” Dany then goes down to the crowd and they lift her up in an almost-prophetic way, as her dragons fly overhead. It’s a breathtaking scene that displays both the great character arc of Daenerys Targaryen and the legend that she is.

“Any man who must say, ‘I am the king’, is no true king. I’ll make sure you understand that when I’ve won your war for you.” – Tywin Lannister to Joffrey Baratheon

Bran tells the story about a cook in the Night’s Watch that killed a king’s son and then put the son into a pie and served it to the king. Bran says murder is not what the gods could not forgive, but rather killing a “guest beneath his roof.” This shows that what Walder Frey did to Robb, Catelyn, Talisa, and their family was unforgiveable. And it foreshadows to Season 7, when Arya serves Walder Frey’s sons—Lothar and Black Walder—in a pie to him as redemption for the Red Wedding.

Tywin Lannister would be a good choice for MVP after putting Joffrey in his place at the Small Council meeting if not for his telling Tyrion he thought about killing him the day he was born; and Tyrion was an option himself for having a clear head about how unjust the killing of Robb Stark was. But Daenerys is the MVP of “Mhysa” for continuing to develop as a person and leader that now has a whole group of people to support her.

After the death of Robb Stark, Melisandre’s abilities were looking stronger; she thought a bigger sacrifice was now needed to help Stannis Baratheon take the Iron Throne—namely, Gendry’s life. However, Davos Seaworth did not want to let that happen, going against the wishes of his king by freeing the bastard in the night. Davos also had a warning from Maester Aemon, which was enough to both keep him alive and to convince even the Red Woman—after she looked into the flames—that the real war was to the north. Stannis would not take the Iron Throne directly yet, but the people would almost certainly want him as king if he eliminates the threat to the north.