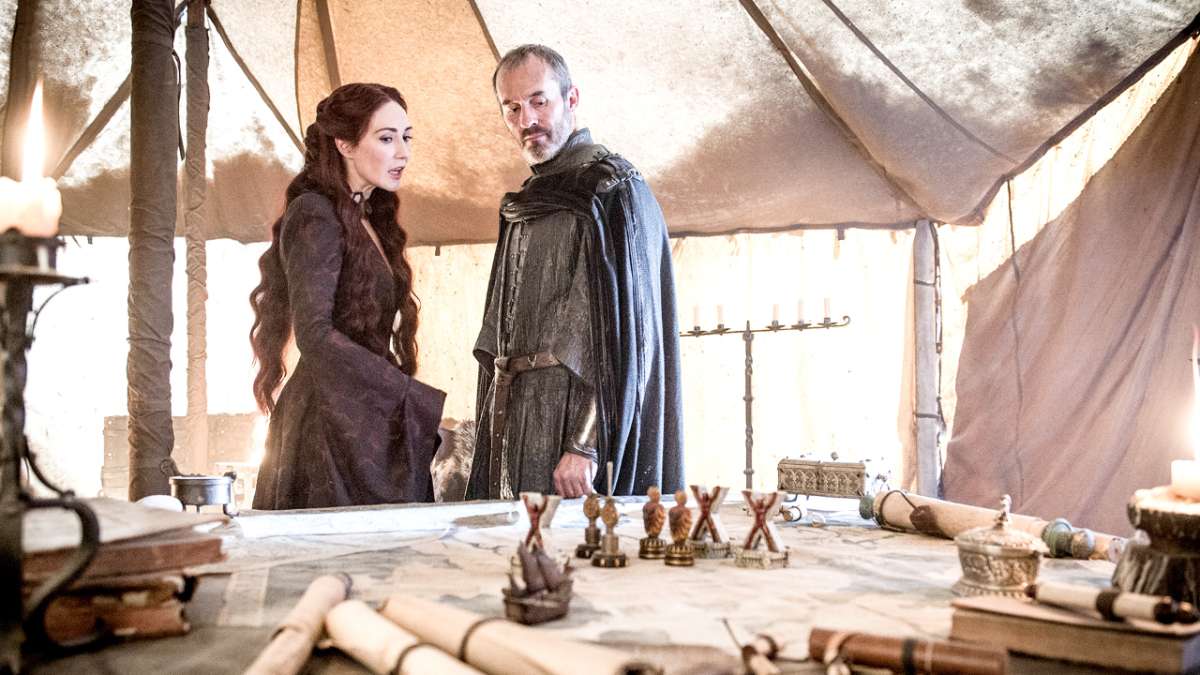 The entire point of Jorah Mormont capturing Tyrion Lannister earlier this season was to bring him to Queen Daenerys, and interestingly enough, the reason Tyrion was in Essos was to meet the Mother of Dragons anyway. When Jorah is set to fight as a slave for the first time, Dany is there to watch, and he quickly runs through the other fighters before taking off his helmet and showing his face. However, Daenerys wants him out of her sight, but he says he brought her a gift—and Tyrion walks out on cue, saying, “It’s true. He has.” When Daenerys asks who he is, he continues, “I am the gift. It’s a pleasure to met you, Your Grace. My name is Tyrion Lannister.” All he got was a shocked looked by Dany, but this was the first time that two of the most important characters in Game of Thrones meet.

“This is the right time and I will risk everything because if I don’t, we’ve lost. We march to victory, or we march to defeat. But we go forward. Only forward.” – Stannis Baratheon

Maester Aemon is the show’s first character to die on-screen from natural causes. The only other characters known to have died from natural causes are Hoster Tully, who only appeared on-screen as a corpse at his funeral, and Old Nan, who is considered deceased by the show’s writing canon after the death of Margaret John (who played her), though her death was never mentioned on-screen.

“The Gift” could have ended with Tyrion finally meeting Daenerys, but over in Westeros, Cersei basically goes to mock Margaery while she sits in a cell, and then goes to see the High Sparrow. The leader of Faith Militant and the Lannister queen seem to be on the same page at first, but their conversation slowly turns against Cersei—“What will we find when we strip away your finery?” Then, the mood gets tense as the High Sparrow tells the story of a young man who came to him; it was Lancel Lannister, and he told of Cersei’s sins. The episode concludes with Cersei being thrown into a cell, and suddenly, the High Sparrow is arguably the most powerful person in the kingdom.

Stannis Baratheon is a very decisive person, so when he made the decision to march to Winterfell, it wasn’t a decision he was going to turn back on. While Davos Seaworth tried to convince his king that the men were not ready to fight, winter was coming, and Stannis didn’t want to get stuck at Castle Black for years—he saw this as his chance to take the Iron Throne, and he was going to follow through on it right now. Also, Stannis had confidence in Melisandre, who hinted at an ace in the hole—one that “The One True King” clearly didn’t want to think about—while reminding him the power of king’s blood.