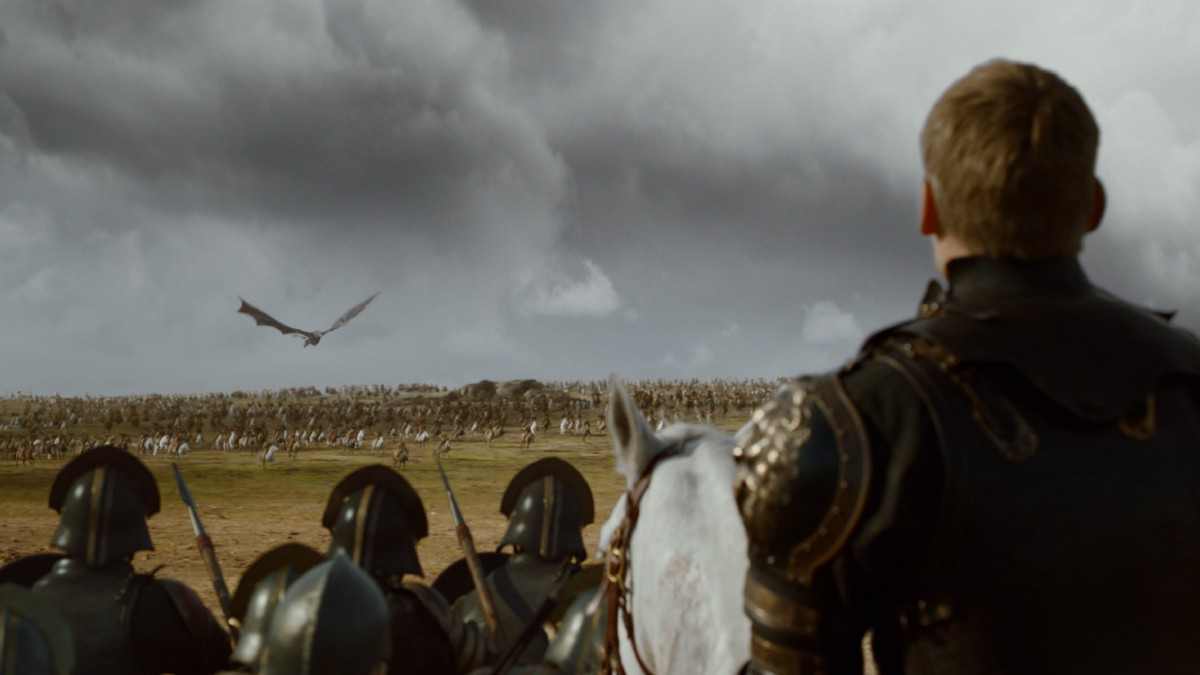 ‘Game of Thrones’ #ForTheThrone Countdown: “The Spoils of War” (S7E4)

While a Stark returning home and reuniting with siblings is always a great moment, as Arya Stark did with both Sansa Stark and Bran Stark in this episode, the best moment of “The Spoils of War” is an easy selection. The Loot Train Attack might have delivered the biggest adrenaline rush of any Game of Thrones episode, and it rivals the Battle of the Bastards for the best battle scene in the series’ (and perhaps all of television and movie) history. The action was explosive and thrilling, but the acting—particularly from Nikolaj Coster-Waldau (Jaime Lannister), Peter Dinklage (Tyrion Lannister), and Emilia Clarke (Daenerys Targaryen; remember, she’s acting on a fake machine with green screens and needs to really use imagination to act like she is on a fire-breathing dragon)—really helped the scene deliver, and having those three principle characters in the scene, especially Jaime and Daenerys actually involved in the battle, made the stakes extremely high.

When the Dothraki initially charged in the distance and Jaime was confident they could hold them off, everything instantly changed when Drogon screeched in the distance—and the look on Jaime’s face perfectly encapsulated what he and everyone in the Lannister army was feeling. Then, from the Dothraki jumping atop their horses as they rode to Bronn working his way to the “scorpion” weapon and eventually putting a bolt into Drogon, the heart-pounding action just gets more and more exhilarating and nerve-wracking. Also, the perspective of Tyrion along with insight about how he was feeling as he muttered under his breath added another layer to it all.

When Dany got off Drogon and was attempting to pull the harpoon out of him, everything came to a head. Jaime saw an opportunity to basically end the war by killing the Targaryen queen—in a similar way to how he killed her father the Mad King, as Daenerys has her back turned. Meanwhile, Tyrion was watching Jaime on horseback with the clear path to Daenerys, hoping to himself (“flee, you idiot”) that his brother would not do anything. After charging with a spear and getting close, in a matter of seconds it looked like Jaime was going to kill a shocked Daenerys, then when Drogon curled his head around to protect his mother and started producing fire it looked like a shocked Jaime was done for—until, Bronn swooped in and tackled Jaime into the water, with the final shot as a cliffhanger showing Jaime floating below the surface, leaving the viewer amazed at what just occurred as the credits silently rolled.

“Chaos is a ladder.” – Bran Stark to Littlefinger

Jerome Flynn, who plays Bronn, said in an interview with Ashley Morton of HBO for “Making Game of Thrones” that the scene had him on the edge of his seat when he watched it, “Although since the day the battle aired, I’ve been a little unpopular, I have to say. My postman won’t speak to me because I shot the dragon.”

Without Bronn, Jaime Lannister would have been obliterated by Drogon, but he again saved the day for the Lannisters—which was enough for the episode’s MVP. But earlier in the battle, Bronn also navigated through the chaos to get to Qyburn’s scorpion device, and he showed the dragons can be hurt while slowing down Drogon. After “The Spoils of War”, Jaime and Cersei Lannister owe Bronn whatever castle and title he wants for saving the Lannister army’s top commander.

Thankfully, Jon Snow’s counsel helped convince Daenerys not to ride to the Red Keep and lay waste to King’s Landing, but as The Dragon Queen said, she had enough of “the clever plans” when she has “three large dragons” that have just been flying around Dragonstone. Taking the advice from Lady Olenna a couple of episodes ago, it was time for the last known remaining Targaryen to “be a dragon.” Dany didn’t have much of a choice but to spring into action after taking a couple of big losses early in the war, and it paid off with a huge victory against the Lannister army.