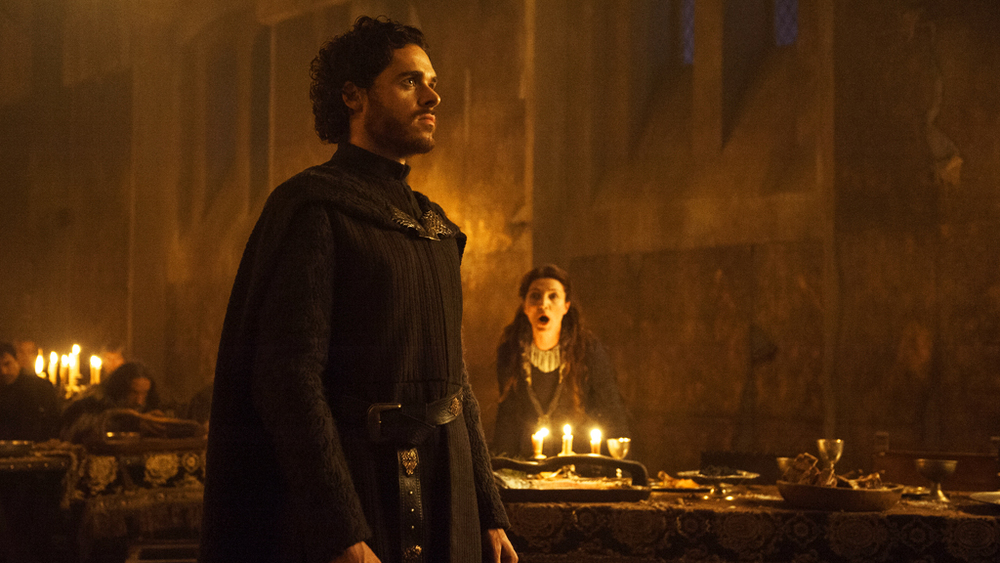 
It’s Game of Thrones week, as the epic HBO series returns for the last time with its eighth and final season premiering this Sunday night at 9 PM. Leading up to the Season 8 premiere, we’ll be going over the top moments, quotes, characters, from the first seven seasons of the series, along with pre-Season 8 Iron Throne power rankings. There are so many amazing moments from the show, but we tried to narrow the top moments from Seasons 1-7 down to the ten best.

Daenerys Targaryen becoming the “Mother of Dragons” and the burning of Shireen Baratheon at the stake were among the other moments that could’ve made the cut for Game of Thrones’ top moments thus far, but the huge event in “Dance of Dragons” (Season 5, Episode 9) gets inclusion in the top ten. At this point in the series, we’ve obviously learned that no character is safe, so it looked like Daenerys’ life might have been coming to an end when she and the others were surrounded by the Sons of the Harpy in the Great Pit of Daznak. Dany closed her eyes before her potential demise to end another crazy penultimate episode of a season—until, a dragon screech could be heard in the distance. With some help from Jorah Mormont, Daario Naharis, and Greyworm, Drogon eliminated the threats to his mother before the Targaryen queen rode away, leaving Tyrion Lannister and the others in complete awe.

Led by composer Ramin Djawadi, Game of Thrones probably has the best music and soundtrack of any television show—and it’s one of the most underrated aspects of the series. That exceptional music is on full display in the long opening scene of the Season 6 finale, “The Winds of Winter”. As the trials for Cersei Lannister and Loras Tyrell were supposed to get underway at the Great Sept, Cersei was instead calmly waiting in the Red Keep—with The Mountain both there to protect her and prevent King Tommen from leaving in a funny moment amid the tenseness.

Aside from Margaery Tyrell, the High Sparrow, and the others in the Sept, and the events in the Red Keep, this scene also included the death of Grand Maester Pycelle; and Lancel Lannister crawled his way to the climax of the sequence: three candles were burning down to their wicks to ignite tons of wildfire. Cersei eliminated almost all of her enemies in one fell swoop, and it also tragically led to the death of her remaining child by suicide, because she was not there to comfort him after her explosive actions.

We’ve seen the Night King in action a few times beyond the Wall, and his attack on the cave with the Three-Eyed Raven and Bran Stark is among the most intense scenes in Game of Thrones. After marking Bran to break the cave’s magical protection from the dead, the Night King also showed he brings winter with him to the point where he can eliminate the presence of fire, as he walked right through the flames on his way inside the cave before striking down three Three-Eyed Raven. Bran’s direwolf Summer died while trying to defend his owner, and all the Children of the Forest were also killed in the action as the important Stark boy attempted to escape a drastic situation. But the most heartbreaking death was Hodor’s, as the gentle giant’s true origin was revealed as he sacrificed himself for Bran; he held the door, but the phrase “Hold The Door” fused into the only word a young Wylis (in Bran’s vision) would ever speak again: “Hodor”.

The odds were stacked against Jon Snow and his army in the Battle of the Bastards, as the numbers were in favor of Ramsay Bolton’s army—but Jon and Sansa Stark had to try to take their home back, both because it was their home and because Winterfell would be a critical strategic position in the Great War against the Night King. The battle started with Ramsay, doing what Sansa predicted: getting Jon to do things on his terms, as Rickon was used as bait to draw Jon out with his army behind him. The former Lord Commander of the Night’s Watch was set to take on dozens of adversaries on his own, but his allies arrived just in time before true chaos ensued.

Eventually Ramsay’s army used the double envelope strategy that Jon was hoping to employ against the larger numbers, and it led to the good guys getting squeezed to the point where Jon almost suffocated—but he emerged from the pile after the fraught moment, though it still looked like the battle would be lost. Then, the Knights of the Vale swooped in, wiping away the Bolton army as Sansa and Littlefinger looked on. Finally, Ramsay retreated back to Winterfell, but Wun-Wun broke through the sealed doors before taking an arrow to the eye. However, Jon grabbed a shield and got to Ramsay, pummeling him until he realized the evil villain was Sansa’s to kill.

While Jon Snow was able to save many wildlings at Hardhome, things looked bleak after the Night King raised thousands of new members for his Army of the Dead. So when the Lord Commander heard that his long-lost Uncle Benjen had been spotted alive by a wildling, he of course immediately sprang into action and wanted to hear from this eye-witness. However, we are left completely shocked when Jon walks outside to see a stake labeled “TRAITOR”, with turncoat members of the Night’s Watch surrounding the Stark bastard when he turned around. Several men stabbed their leader, claiming it was “For The Watch”, including Olly delivering the final blow to the heart before repeating the phrase. As the Stark theme plays in the background of the cold climate at Castle Black, another hero had been lost.

A bunch of moments, including the previous moment, could be in the top two of best Game of Thrones moments through seven seasons, and the Tower of Joy/King in the North II scene in “The Winds of Winter” is no exception. Bran’s vision allowed us to see the aftermath of the Tower of Joy fight, as Ned Stark made his way up the structure to see his sister Lyanna dying in bed after giving birth to Rhaegar Targaryen’s son: Jon Snow.

The scene perfectly transitions from Lyanna pleading with Ned to promise her that he’d protect her son, going from a baby Jon to showing a present-day Jon in front of northern lords after the Battle of the Bastards. A fiery speech by Lyanna Mormont led to Jon being named the King in the North, in a scene reminiscent of Robb Stark being named King in the North back in the Season 1 finale. Considering he was dead at the beginning of the season, Jon Snow made quite the turn in a short amount of time. The two moments rolled into one, showing how Jon Snow achieved success despite his birthright being hidden away as he lived a bastard, is undoubtedly among the best of Games of Thrones.

It was so long ago in both time for viewers and time/story for the show, but Ned Stark’s death was wildly staggering when it happened. For non-book-readers, the common thought for many Game of Thrones viewers was that Ned would eventually win “the game” and sit on the Iron Throne. Even when he was in dire circumstances as King Joffrey’s prisoner and then even when he had his head on the chopping block, it still felt like Ned would get out of the situation by being sent to Castle Black to reunite with Jon Snow and potentially march back down south to King’s Landing—we’ll never know. Cersei Lannister and her advisors all expected Ned to simply be sent to the Wall and out of sight, but King Joffrey had other plans, and the six words “Ser Ilyn, bring me his head” changed the realm forever while showing that Game of Thrones is far unlike any other show.

An “off-screen” event in the books, Game of Thrones took the attack on Hardhome to another level, putting Jon Snow in middle of the action as the Night King and the White Walkers oversaw an attack by their Army of the Dead on the wildlings and a small number of Night’s Watch members. Jon was in a one-on-one battle with a Walker, and he was able to obliterate the enemy with Longclaw, showing that Valyrian steel could destroy the dead while also intriguing the Night King. But the numbers were too many, which forced a retreat to the water, and the ultimate enemy came down below and walked to the edge of the dock, raising thousands of wights for his army. We’d seen the Night King before, but not like this; and the politics of Westeros seemed small at this point after the utter destruction north of the Wall.

There had been incredible battles in Game of Thrones, but through seven seasons, “The Spoils of War” delivered the only battle with two of the five principle characters on opposite sides on the field of battle. The start of the Loot Train Attack was astonishing enough, with Jaime Lannister absolutely stunned at the screech of a dragon and the sight of Drogon—being ridden by Daenerys Targaryen—in the distance after initially believing they could hold off the Dothraki, and it was crazy seeing the foreign army in action while a dragon laid waste to the Lannister army. But the conclusion of the scene, when the Kingslayer went for it all by attempting to kill Daenerys and end her conquest—despite Drogon being right there to protect her—made it look like at least one of the main characters would die; but Bronn was able to save Jaime’s life to end legitimate heart-pounding action.

Despite so many spectacular moments throughout Game of Thrones, the Red Wedding is arguably without question the top moment from the first seven seasons. There are obviously a bunch of shocking events in the series, but end of “The Rains of Castamere” leaves the viewer in a state of complete shock, with three critical characters getting killed off in middle of a wedding. Things were going so well when the wedding began, as the bride was a pleasant surprise for Edmure Tully, and Walder Frey even gave Robb Stark a comical/friendly look like “not bad, huh?”

But when song of House Lannister played, Catelyn Stark began to realize something was up—the uneasiness that crept onto her face eventually led to her giving a chain-mail-wearing Roose Bolton a look, and from there it was too late. Suddenly, a pregnant Talisa Stark was getting stabbed in the stomach just minutes after talking with Robb about naming their potential son “Eddard” after Robb’s father, and almost the entire Stark army was slaughtered in seconds, as was Robb’s direwolf Grey Wind outside. Robb took arrows but remained alive, crawling his way to his dead wife in an agonizing scene; and Catelyn did her part to somehow salvage an awful situation. But things just turned too quickly in what should’ve been a harmless event—yet it still drags out to the point where you believe that at least the King in the North might be able to escape the Twins alive, until Lord Bolton sends regards from the Lannisters and puts a knife into his king’s heart.

Many people were hoping that Ned Stark would sit on the Iron Throne, but his death was early in the series. With similar high hopes for Robb, this was much different coming in middle of Game of Thrones, at the end of Season 3. It showed that, just like in real life, the good guys don’t always win, and that anything can happen. The Red Wedding turned the series completely upside-down, and we can only hope the end of the series can do well enough to top it.