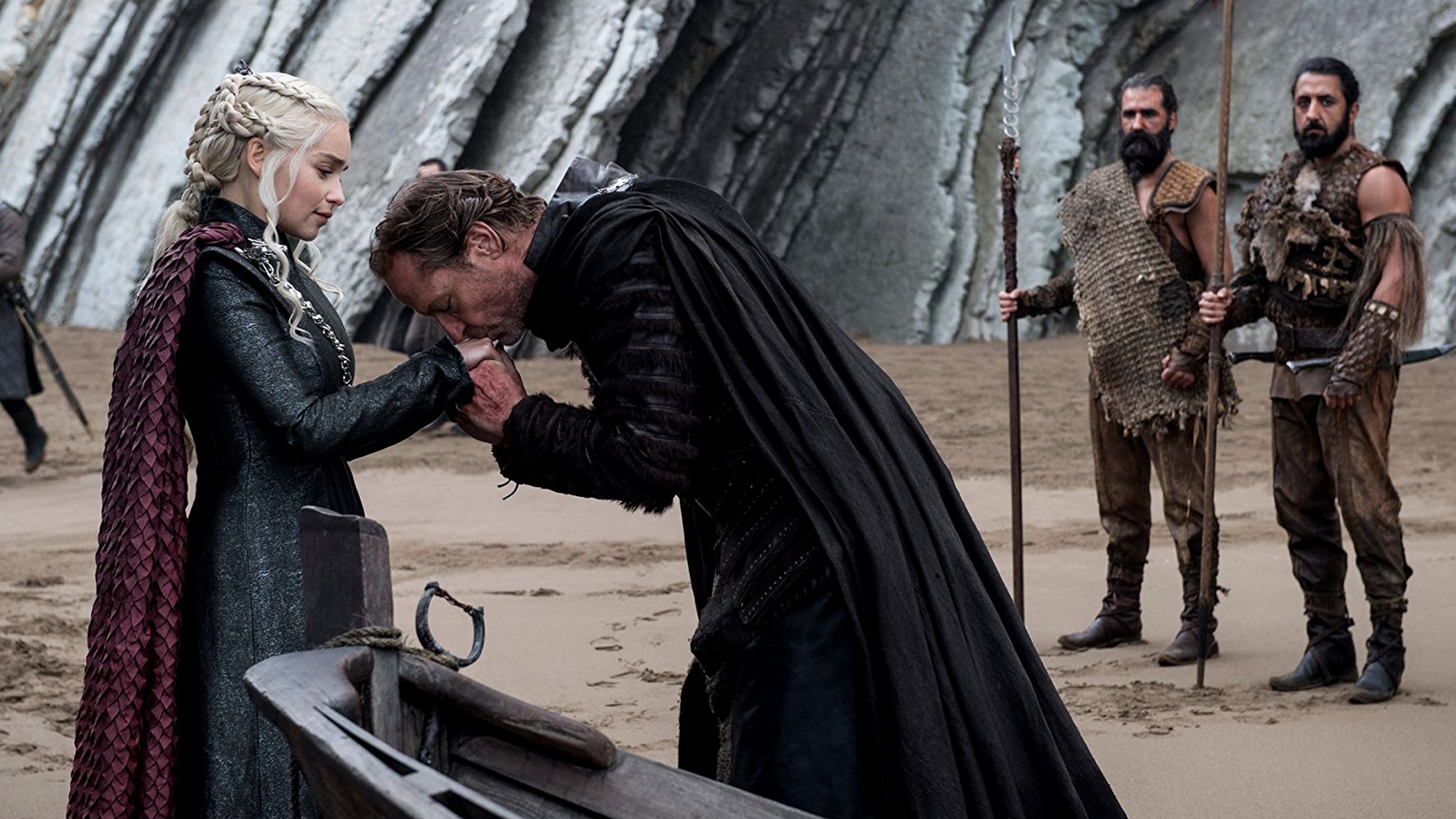 
Only two more episodes to go for Season 7 of Game of Thrones, and Winter is definitely here. “Eastwatch” did a great job setting up the penultimate episode on Sunday, and this is how the characters rank heading into it.

It was a bit surprising to see the Brotherhood got themselves jailed at Eastwatch, but after some looks and words were exchanged, Thoros and the others wanted to help Jon and the others hunt beyond the Wall.

We don’t know how Edd is handling things at Castle Black, but he is fortunate to have the former Lord Commander in the North, putting another obstacle between the Night King and the Night’s Watch.

Lyanna keeps slipping because we haven’t seen her, but once again, we can be sure she isn’t knitting by the fire. Perhaps she is keeping her ears open and will be able to tell the King in the North who he can and cannot trust at Winterfell (if he returns, that is).

Tormond was asking about her, but Brienne slips in the power rankings because there isn’t much she can do for Sansa other than guard her for now. As stated last week, Littlefinger is the biggest threat right now, and Brienne wouldn’t be able to do much even if she did know everything he was doing.

Well, Gendry certainly came out of no where to suddenly be fighting alongside Jon Snow against the White Walkers. The two hit it off early, and Robert Baratheon’s bastard will look to put his Warhammer to good use against the army of the dead.

It appears Beric will finally put his sword of fire to good use again, but he better stay alive this time, because it’s unlikely Thoros would be able to bring him back with dead men everywhere.

He has always provided good advice and seems to have truly good intentions, but is Varys wise in telling Tyrion to “make” Daenerys listen?

Sam decided to leave the Citadel after the maesters basically mocked him for believing in White Walkers, and he no longer wants to read about men more accomplished than him. It was a respectable move, but he made a potentially grave mistake in not listening to Gilly—who may have been on the verge of revealing Jon Snow’s true parentage.

A big jump here for Jorah, as he returned to Daenerys—just as she ordered him to do—in a touching moment. Now, he will serve her by attempting to capture a dead man with the Eastwatch team. Can Jorah return to the Mother of Dragons’ side yet again?

It was a mystery about how Tormond and the wildlings were handling things at Eastwatch, and they actually did a great job, including capturing the Brotherhood without anyone dying. In the long run, his chance of survival might actually be better beyond the Wall with Jon Snow than it would have been as a sitting duck at Eastwatch.

Qyburn definitely has a pulse on King’s Landing for Cersei, as we can assume he is the one who found out Bronn was helping Tyrion get a meeting with Jaime. An armistice between Daenerys and the Lannisters would allow the Hand to cook up more schemes to keep his Queen on the Iron Throne.

Whatever happened in the past between those at Eastwatch doesn’t matter anymore, because they are all alive and need to stop a common enemy now. Fighting beyond the Wall might be the most important thing the Hound ever does.

Cersei knows Bronn set up a meeting between her brothers, and she might have bad intentions for the sellsword after he went behind Jaime’s back. Even if Jaime wants to keep Bronn around, it might not matter if Cersei views him as a liability. That said, Jaime owes him his life.

We know Davos has never been much of a fighter, so it’s probably a good move to have him stay behind at Eastwatch while the others go beyond the Wall. The Onion Knight showed he’s still an elite smuggler last episode, too.

The crazy Euron is still as dangerous as anyone, but marrying the Queen doesn’t look like it will ever happen now that Cersei is pregnant and will say Jaime is the father. An “alliance” between Dany and Cersei probably wouldn’t be good news for Euron, either, as he doesn’t necessarily seem like a peacetime leader.

Jaime survived the battle in “The Spoils of War” thanks to Bronn’s heroics, and he could use a break from the war as much as anyone after going face to face with a fire-breathing dragon. Also, just as his father wanted, the one-handed Lannister still has a chance to leave a legacy, especially with a new child on the way.

Getting smuggled into King’s Landing was a bold move, but it was something Tyrion felt he needed to do for both the realm and to stay on Daenerys’ good side. Fortunately, Jaime didn’t cut in him half like he told Bronn he would, but Tyrion is still torn after the loot train battle.

Even when Littlefinger doesn’t do much on screen, we can be sure he is working behind the scenes. Petyr Baelish was several steps ahead of Arya in “Eastwatch,” and his intentions are to create more tension between Sansa and her sister.

The Three-Eyed Raven was able to get word to Dragonstone that the army of the dead is marching towards Eastwatch, and now Jon and the others will be able to use that intel and hopefully accomplish what they need to accomplish beyond the Wall.

She defended the King in the North after complaints by northern lords, but Sansa didn’t endorse him well enough in the eyes of Arya. The tensions will likely rise between the two after Littlefinger’s plan.

Arya thought she was crafty enough to spy on Littlefinger, but it turns out she played right into his hands, as Baelish continues to be steps ahead of everyone. You have to respect the loyalty Arya has for an absent Jon, though.

The army of the dead looks as strong as ever, and the Night King will try to add some big-time names to its ranks as Jon Snow leads a raid beyond the Wall. Will we finally get to see the Night King actually fight?

A temporary truce is exactly what Cersei needs, but does anyone actually expect her to play clean if it were to happen? Now pregnant, she clearly has every intention of staying on the Iron Throne for a very long time, and Cersei might even be open to bringing Tyrion into the fold after she got confirmation that he didn’t kill Joffrey.

The quintessential good guy in Game of Thrones, Jon Snow knows he needs to face the Night King’s army beyond the Wall to capture a wight and prove that the White Walker threat is real. Ser Davos told him he’s no longer Lord Commander, but the King in the North is doing what needs to be done, and informed Dany that he doesn’t need permission because he is a king.  Under his leadership, the Eastwatch team has a chance.

Daenerys allowed Tyrion to meet with Jaime, which shows she still has trust in him after failed strategy and his clear opposition to burning Randall and Dickon Tarly alive—a choice that she needed to make to keep her word as a queen. The Mother of Dragons was clearly sad to see Jon (and Jorah) go North, especially after Jon’s connection with Drogon, but she knows it needed to be done and can only hope she will see him again.