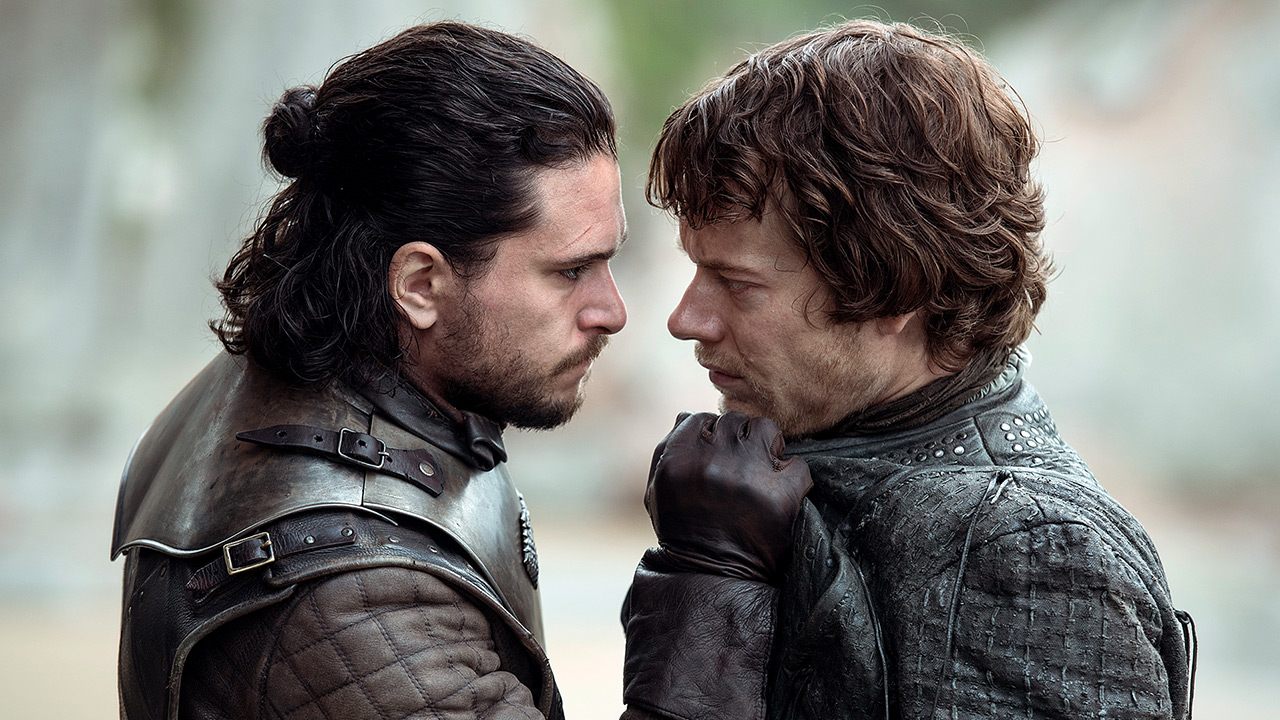 ‘Game of Thrones’ Power Rankings After “The Spoils Of War” (S7E4)


Wow. What an ending to “The Spoils of War.” We were left with a cliffhanger, but as of now, it appears all the major characters in the loot train battle are still alive. Here is where they all stand heading into “Eastwatch” on Sunday.

Jon was not at all happy to see Theon because of his betrayal against Robb, but the broken Greyjoy was fortunate to keep his life for helping Sansa escape Winterfell at the end of Season 5. “What you did for her… is the only reason I’m not killing you,” were the words of the King in the North.

We learned in the upcoming episode preview that the Night King and the army of the dead are marching towards Eastwatch, which Jon knows from Bran warging; let’s just hope Bran warned Edd and the Night’s Watch, too, or else there might be a massacre worse than the one at Hardhome.

Jorah is likely on his way back to Daenerys, and she could use him on the ground in battle. Even with three large dragons, beating Cersei—not to mention the White Walkers—isn’t going to be a walk in the park.

Seeing Drogon in action might have given Lord Tarly second thoughts about what side he chose to join. Fighting the Dothraki and a fire-breathing dragon was a much bigger challenge than attacking an unsuspecting Highgarden.

How soon until Beric and the Brotherhood without Banners join the fight? We haven’t seen them since the season premiere, but they should be in action soon.

Unless the Brotherhood is going there, too, the Wildlings are probably the only people in Westeros heading towards the Wall in winter. Unfortunately, it looks like the Night King is heading to the same place, and Tormond might not be able to stay alive this time.

By no fault of her own, Lyanna Mormont moves down after not seeing her for two straight weeks. Plus, Arya might now be the most intimidating girl in the North. Hopefully the two interact at some point.

Brienne moves up for fulfilling her vow to Catelyn Stark, but she did kind of get dominated when sparring with Arya. That is more of a credit to the young assassin than it is a slight on Brienne, though.

No rule-breaking for Sam this week, but we can assume he’s still acquiring knowledge to help Jon against the White Walkers.

Are Tyrion and Varys a package deal? If so, he better hope Tyrion becomes fully committed to Daenerys, because she will have to make a difficult decision if she finds out her Hand still has some allegiance to the leader of the opposing army, even if it is his brother.

Well, Qyburn’s weapon against dragons certainly works, and even though it was destroyed, he probably has more than one ready. The Hand of the Queen could have more (different) tricks up his sleeve, too.

Good thing the Hound is off Arya’s list, because she would probably have no problems slicing him up after her sparring session with Brienne. If they meet again, the two could team up to make a deadly duo.

Yes, Daenerys flew in on a dragon and decimated the Lannister army, but Bronn has to be the MVP of “The Spoils of War.” As if his bravery operating Scorpion (the giant crossbow) wasn’t enough, Bronn put his own life on the line for Jaime in perhaps the most heroic moment of the entire series.

We haven’t seen Littlefinger thrown off like he was in his conversation with Bran since Season 1 when Cersei showed him “power is power.” Having the Three-Eyed Raven use his own phrase (“Chaos is a ladder”) against him probably wasn’t one of the outcomes Littlefinger ever pictured in his head.

Davos has noticed Jon staring at Daenerys’ “good heart,” and the Onion Knight might float marriage as an option so they can fight enemies together. It’s hard to see any way Jon will agree if the White Walkers aren’t the priority, though.

The final shot of Sunday’s episode was eerily similar to the final shot of “Winter is Coming” (the first episode of the series) when Jaime pushed Bran out of the window. We know Bran survived, and it’s highly unlikely that Jaime was saved only to drown right after. The battle was a big loss for the Lannisters, but Jaime stays in the top ten because you have to respect him staying and fighting.

Tyrion is clearly torn between his loyalty to Daenerys and his love for Jaime, and even before he saw Jaime charging at Dany, Drogon, and a probable death, he looked hurt by the damage being done to the Lannister men. Will he choose to vouch for the lives of Jaime and Bronn if they are captured? And could that lead to Daenerys re-evaluating his position (i.e. whether or not he keeps his head)?

With the Lannister forces weakened and Jaime’s fate uncertain, Euron might have some more influence than before. Still, he probably shouldn’t push Cersei too much if he cares about his life.

If not Lord Stark listened to an old conversation between Littlefinger and Varys, there’s no telling what else he saw/heard/knows. The most important piece of information Bran has is Jon’s true parentage, and hopefully he tells him soon.

Sansa has now reunited with each of her living siblings, and she appears pretty well guarded now that Arya is back home. Her biggest threat could be one that doesn’t even use a sword, though, with the ambitious Littlefinger lurking around.

The White Walkers look to be making their move very soon, and the next episode being called “Eastwatch” doesn’t bode well for those guarding the Wall there. Viewers saw the damage done at Hardhome, and this could be the same thing but without Jon Snow there to lead a potential escape.

The guards didn’t believe she was who she said, but Arya Stark finally returned home and reunited with Sansa and Bran. Given a Valerian steel dagger by Bran, Arya should be well-equipped against the army of the dead, and Jon—who will be thrilled to see her (if he indeed does)—could certainly use a trained assassin against the Night King.

He wasn’t there to see Drogon in action, but if he was, Jon would probably have to seriously consider bending the knee in order to defeat the White Walkers. The King in the North should head back up to Winterfell soon enough, especially if the Wall is attacked, as the North needs dragonglass.

Cersei was fortunate to get the gold into King’s Landing before Daenerys and the Dothraki attacked, but she still suffered a significant loss of men—and the status of her top commanders, including Jaime, are all up in the air. On the bright side, Qyburn’s weapon worked and she might have reinforcements coming from the Iron Bank.

How can Daenerys not be #1 after her loot train battle victory? Jaime looked like he had a chance to kill the Mother of Dragons, but she is named that for a reason, and there is probably no better protection a Queen could have than a large, fire-breathing dragon. Daenerys clearly took Lady Olenna’s advice from earlier in the season, and she will be even more of a force when all three dragons are together. The question remains: will Dany continue her quest for the Iron Throne, or will she be convinced to bring the fight North?