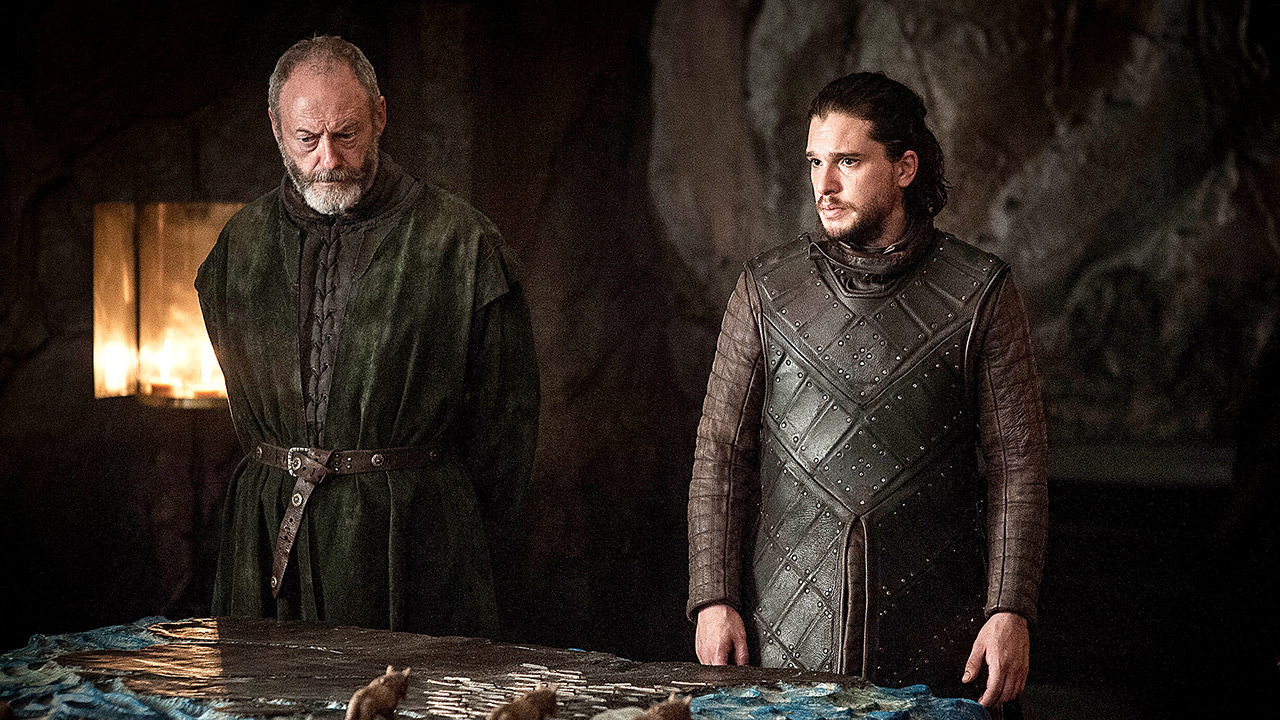 
WARNING: This article contains SPOILERS for Season 7, Episode 5 of Game of Thrones.

Many things happened in “Eastwatch”, the fifth episode of Season 7 of Game of Thrones. Though this episode went different than expected, with no assault on the Wildlings at the Eastwatch castle, there was a lot packed into it, while setting up for the penultimate episode of the penultimate season.

“Eastwatch” quickly resolved the cliffhanger from last week’s thrilling conclusion to “The Spoils of War”, as Bronn and Jaime emerged from the water at a safe distance from Daenerys, Drogon, and the Dothraki. It turns out Jaime did have his gold hand still attached, but he was dispirited over what just happened. It’s hard to blame him after he witnessed the destruction caused by the flamethrowing Drogon, and also realizing that was only one of Daenerys’ three dragons. Bronn—who back in Season 4 told Tyrion he likes him, but he likes himself more as a reason not to fight The Mountain for Tyrion’s Trail by Combat—said he’s done fighting because dragons are where he draws the line.

Meanwhile, Daenerys was giving the rest of the surviving Lannister soldiers from the loot train battle a choice: either bend the knee or be sentenced to death. Randyll Tarly, who was on the fence about who to fight for in the first place, refused to bend the knee, as did his son Dickon. Randyll simply did not want to be ruled by a “foreign invader” that used “savage” Dothraki soldiers, so he made his stand. Some other Lannister soldiers also refused to bend the knee, but that changed when Drogon burnt the Tarly father and son to ashes.

Before Daenerys gave the final order to execute the Tarlys by fire, Tyrion attempted to get his queen to go easier on them and send them to the Wall or put them in a cell, and he appeared to have an uneasy feeling when Dany allowed Drogon to burn them alive. Later, he talked to Varys about the situation, and Varys said Tyrion needs to find a way to “make her listen”—that might not be the best idea.

The Mother of Dragons executing her enemies by use of dragon allows the viewer to decide if they believe it’s “right” or “wrong.” Tyrion and Varys clearly believe it’s wrong, with their main reason being that she is the daughter of “The Mad King”, who also burnt his enemies alive. But Daenerys has always been a fair and just leader, and she gave them a choice—she didn’t just straight up murder them like her father did. Personally, I think it’s fine if she wants to kill her enemies if they choose death instead of joining her. She’s had people wanting her dead since she was a baby, and Cersei would not have any mercy on Dany if she was the one that lost in battle. Also, Daenerys is far from mad, and she’s far from her father.

When Daenerys returned to Dragonstone on Drogon and rode up to Jon, it was an awesome moment. Jon—who as we know, is a Targaryen—got closer to one of Daenerys’ dragons than anyone else has without dying. Until now, I don’t think anyone else has ever touched the dragons besides Daenerys, and it’s clear Drogon senses something about Jon, which Daenerys notices.

The King in the North, as anyone but the Targaryen queen would be, was unnerved by his encounter with Drogon, and it was funny when Daenerys shot him a death stare after he said “beautiful” wasn’t exactly the word he was thinking of to describe her dragons. Dany explained to Jon that she sees her dragons as her children, no matter how big they get or how much they terrify others. It brings back memories of when Drogon was just a little pint sized dragon on Daenerys’ shoulder at the conclusion of Season 1.

Just as Daenerys came out and asked Jon about Davos saying he “took a knife in the heart,” some Dothraki soldiers presented Jorah, who returned from the Citadel in a heartwarming moment. We’ll have to see if Daenerys is ever able to ask Jon about his knife to the heart again.

Unfortunately, Bran’s warning—from his vision ended by the powerful Night King—about the army of the dead is not being taken seriously by anyone except for the Northerners (and now those at Dragonstone). Because Sam couldn’t convince the maesters that Bran’s warning and the army of the dead were real, he decided to leave the Citadel and give up his dream of being a maester—but not before he took some valuable information to battle the White Walkers (though the stubborn maesters at the Citadel probably won’t even notice).

Of course, the King in the North, who also just found out Bran and Arya are still alive after thinking they’ve been dead, believes Bran and demanded to leave Dragonstone to go and fight with his people. Tyrion devised a plan (let’s hope this plan goes better than his previous ones) to bring a wight to King’s Landing to show Cersei the army of the dead and the White Walkers are real. Thus, the E-Team (Eastwatch Team) was formed.

When figuring out how to even capture one of the wights, Jorah confidently announced “with the Queen’s permission, I’ll go North and take one.” Jon, the great leader and king that he is, said he would go with Jorah north of the Wall, which was a huge shock to everyone. As Davos pleaded to his king, “you can’t lead a raid beyond the wall. You’re not in the Night’s Watch anymore. You’re the King in the North.”

Daenerys was more emotional about Jon’s decision to go on the raid than she was about Jorah deciding the same thing, which Jorah noticed. Dany clearly did not want Jon to go, saying she didn’t give him permission to leave yet; but Jon respectfully told her that he doesn’t need his permission and stated, “I am a king.” Daenerys did realize the only choice is to let him go, but she couldn’t even speak to grant permission for Jon to leave Dragonstone, instead just nodding her head in approval. As always, it was superb acting by Emilia Clarke to show Dany’s emotion without using many words.

Despite Jon’s clearly honorable leadership, the Northerners were still not happy with him (“The King in the North should stay in the North”). Sansa could have agreed with the Northern lords, but she didn’t—though Arya thinks her sister should have defended Jon more. And Littlefinger is now trying to drive a wedge between Sansa and Arya so their bond doesn’t get in his way. He really is always about seven steps ahead and might play the game better than anyone. Because he’s such a snake (and not a fighter) it’s hard for anyone to hold him accountable, but maybe Arya and Sansa will realize what he’s doing and make him pay.

Back in King’s Landing, Jaime warned Cersei that the Dothraki will beat any army and the dragon is unstoppable, adding “this isn’t a war we can win.” He then told her that it was Olenna that poisoned Joffrey, not Tyrion, which Cersei is irate over before calling Jaime a soldier and refusing to stop fighting the war.

As a part of Tyrion’s new plan, Davos needed to smuggle him into King’s Landing so he can try and convince Jaime to convince Cersei to hear them out about the army of the dead. This was the first time Tyrion has been in King’s Landing since he killed his father in the Season 4 finale—and the first time he and Jaime saw each other face-to-face since then. Jaime, who told Bronn—the one that set up the meeting between the two brothers—he would kill Tyrion if he ever saw him again, was incensed at Tyrion.

The Lannister dwarf tried to explain that Tywin never understood it was not his fault he was born as a dwarf and just wanted him dead, but Jaime didn’t want to hear it. The look on Tyrion’s face (unsurprisingly, great acting by Peter Dinklage) showed the heartbreak he felt over Jaime’s reaction. After all, Jaime was one of the only people to ever empathize for Tyrion and his situation, but now his older brother really doesn’t care.

Meanwhile, Davos went to find Gendry, knowing where the blacksmith would be. If you don’t remember, Davos freed Gendry from Stannis’ jail at the end of Season 3, and we hadn’t seen him since. The bastard son of Robert Baratheon, with the help of a Warhammer—the same weapon his father used in Robert’s Rebellion—will now help Jon Snow, who likes Gendry probably because he is honest and wants to help as a member of the Eastwatch team.

When Jaime brought Tyrion’s request to Cersei, she already knew about the meeting (Qyburn seems to be doing quite the job as Grand Maester and Hand of the Queen). Cersei said she is open to an armistice with Daenerys, but it’s clear she plans to play dirty. A big revelation was that she is now pregnant with her fourth child, something that brings Cersei and Jaime back together after arguing earlier—and something that they’ll want to remain alive for

The other stunning revelation, revealed, unknowingly, by Gilly before they left the Citadel, is that Rhaegar Targaryen had his marriage annulled and was re-married to someone else at the same time. So, the Targaryen prince’s marriage to Elia Martell was annulled and he was, presumably, married to Lyanna Stark. This bombshell development means that Jon Snow is not only the son of Rhaegar and Lyanna, but that he is a true-born Targaryen.

Before leaving for Eastwatch, Daenerys said her farewells to Jorah and Jon. It’s evident that Jorah realizes either Daenerys has a thing for Jon or that he thinks Dany and Jon would be perfect together and decides to take a step back—or both. Tyrion also seemed to notice the feelings Daenerys, who told Jon she has grown used to him right before he left, has for the King in the North.

With Jon, Jorah, Davos, and Gendry meeting Tormund at Eastwatch, they add a few more members to complete the Eastwatch squad—the Brotherhood without Banners. As they all weren’t afraid to show, most of them are not particularly fond of each other. But they are all on the same side and have no choice to go beyond the Wall on this near-impossible mission, because as Jon Snow puts it: “We’re all breathing.”