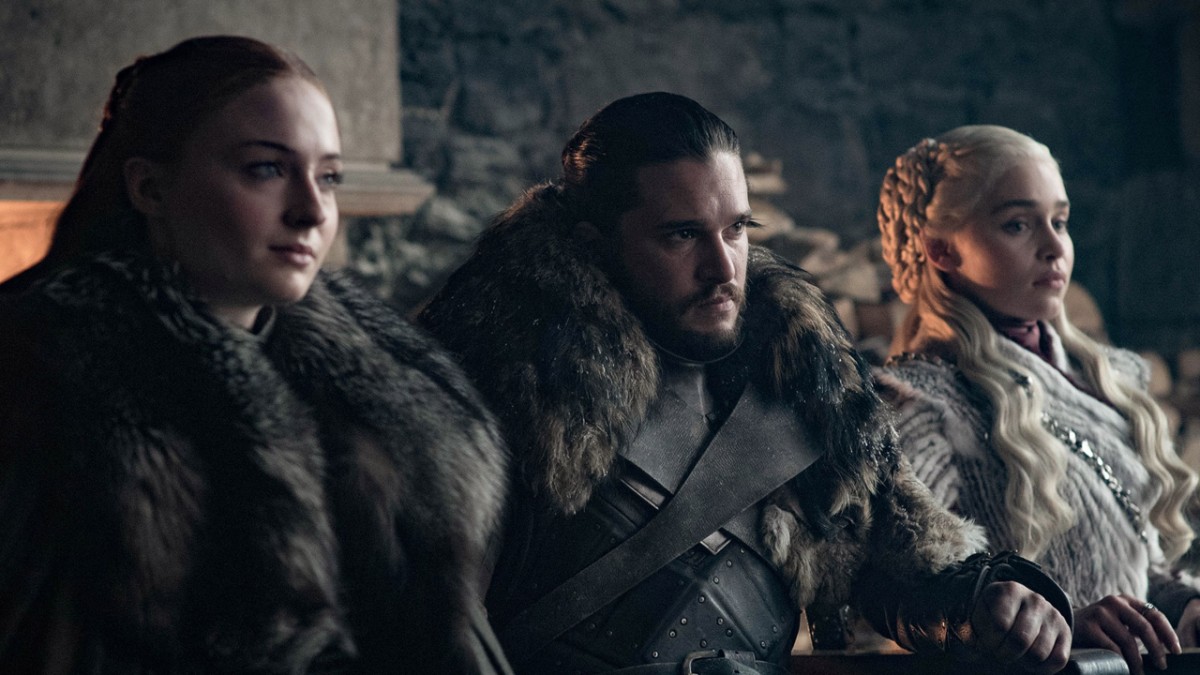 
Game of Thrones is back for its final season, and we’ll have episode recaps and reviews for each of the final six episodes, along with more content like weekly Iron Throne power rankings. These recaps will help those that might be confused or unclear about anything, but they will be light on speculation and theories, as we believe it’s better to just watch the story unfold.

Previous Episode: “The Dragon and the Wolf”

Daenerys arrives at Winterfell and Jon Snow gets some big news.

The opening scene of the episode (especially with Game of Thrones returning for the final time), Jon and Daenerys riding Drogon and Rhaegal, the shocking sneak attack by a reanimated Ned Umber as a wight, and the final shot when Jaime catches the stare of Bran are all among the great moments from the Season 8 premiere, but the top moment is probably in the Crypts of Winterfell when Sam tells Jon the truth. It was going to be interesting to see how Jon reacted, and while he clearly didn’t want to just readily accept that he is the rightful king (and Daenerys’ nephew) because of how he feels about the Mother of Dragons—as displayed by his deflection by calling Ned Stark the most honorable man he knew, i.e. he wouldn’t have lied to him his entire life—part of him looked like he might be receptive to being the Protector of the Realm. We didn’t see Jon again after he was told the truth, so we might learn in Season 8, Episode 2 how much this news changes his view on Daenerys—unless the dead arrives before he has time to confront this hard truth.

While Euron Greyjoy was busy in the capital after successfully delivering the Golden Company to Queen Cersei, his nephew Theon and some ironborn were able to take out guards on The Silence and rescue their queen, Yara. Theon went into Reek mode at the conclusion of last season’s battle at the sea, but he made good on his retreat by coming back for his sister. But what really makes Theon the MVP of “Winterfell” is that he’s decided to go back North and fight for the Starks—his other family—in the Great War. You could see the emotion on Theon’s face as he makes the decision before the siblings embrace and say their family words. Theon’s amazing character arc continues with him shedding Reek persona, and hopefully he’ll be able to right the wrong from earlier in the series when he took Winterfell and forced Bran and Rickon to flee.

-Through seven seasons, the opening credits have had frequent changes depending on what was going in the Seven Kingdoms and where the settings of the episodes were, but the major change for Season 8 was a surprise—and pretty cool. With the death getting past the Wall, things look much darker for the people of Westeros, which is reflected with the opening credits. Also, the story has shrunk to mainly just the North and King’s Landing, so the new opening credits make sense.

-Sansa Stark was certainly going to be reluctant to welcome Daenerys to the North, as were all the Northern lords, but she was about as cold as possible toward the Targaryen queen. The Lady of Winterfell doesn’t appear to have much respect for Dany despite her brother Jon bending the knee, and the tension between the two sides is obvious.

-As usual, the Stark reunions were awesome, but Jon looked shocked at how unattached Bran is as the Three-Eyed Raven. The reunion between Jon and Arya was heartfelt and interesting, with Arya taking Sansa’s side regarding Daenerys—potentially helping turn Jon away from his queen.

-Sansa’s reunion with her former husband Tyrion Lannister probably would’ve been nicer if Tyrion wasn’t Hand to Daenerys, but the scene really highlights how smart and wise Sansa had become—she knows Cersei isn’t really going to send her army north.

-A new key character, Harry Strickland—the leader of the Golden Company—will likely be important moving forward, and the delivery of the highly-skilled sellswords to Queen Cersei finally got Euron what he wanted.

-Bronn has made it clear that he’s about taking care of himself, which makes it believable that he might actually kill Tyrion and Jaime for Cersei—disobeying could mean he loses his head (or worse). But it’s hard to see Bronn being able to pull the trigger on two people that can probably considered his closest friends. We’ll see.

-Arya’s reunions with The Hound and Gendry were amusing. It looked for a moment like The Hound and Arya might have a warmer embrace, but it was probably lofty to expect that to happen.

-Jon was successfully able to ride Rhaegal in the cool dragon joy ride with Daenerys, which ended with a funny look from Drogon as the two embraced. We will likely see Jon riding Rhaegal in the Great War.

-It seems Daenerys is being set up as a bit of a villain—or at least to look bad. The Northerners are not fans of the Mad King’s daughter, and Daenerys doesn’t seem to feel the need to appease them in any way (though it’s hard to blame her given the cold reception she’s received). Then, Dany coolly told Samwell Tarly that she killed both her father and brother, which Sam then went and told his good friend Jon about before breaking the news about his parentage. Maybe she can earn some respect depending on how she handles Jaime’s arrival.

-The scene at Last Hearth, the seat of House Umber, was very well done. After the destruction of the Wall at Eastwatch, Tormund Giantsbane and Beric Dondarrion led the survivors before hearing something, and the dark scene became more intense before it turned out Edd and some members of the Night’s Watch were there doing the same thing. The White Walkers had already arrived, and the Night’s Watch members had already found something at Last Hearth: Ned Umber’s body surrounded by dismembered body parts (of the Umber men meant to protect Young Ned) in the White Walker spiral. The scene was disturbing enough, but Ned’s reanimation as a wight—you could see his blue eyes open before his scream—was pretty scary. The patterns created by the dead are likely to be important as the story comes to an end.

-As many other people in Westeros thought to be the case, Jaime Lannister obviously thought Bran Stark was dead, which is why he was surprised to see him at Winterfell. Now the Three-Eyed Raven, Bran might not be too upset with Jaime because getting pushed out that window in the series premiere gave him his power to help in the fight against the Army of the Dead. Judging by the preview for next week, it looks like Daenerys (who had her father “the Mad King” killed by Jaime) will be the one most upset about the Kingslayer’s claim he wants to fight with/for her.

-And with the Night King in between Last Hearth and Winterfell, it looks like the Battle of Winterfell will indeed be in Episode 3, which will be the longest episode of the series at 82 minutes.