WOLF SPORTS ALERT Fantasy Consigliere tiered membership upgrade nearly complete. Original members will not be impacted. Thank you for your patience.
Home / frontgames / ‘Game of Thrones’ Season 8, Episode 3 “The Long Night” Is Not Too Dark 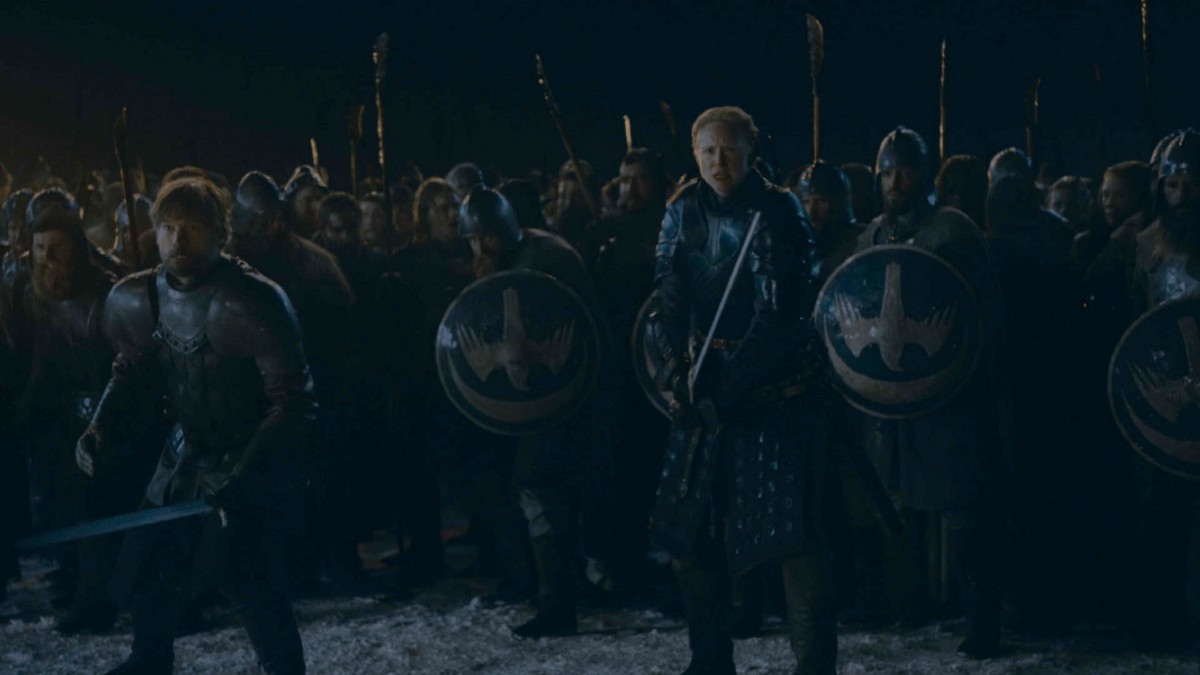 ‘Game of Thrones’ Season 8, Episode 3 “The Long Night” Is Not Too Dark


“The Long Night” had a ton of hype to live up to as the Battle of the Winterfell—the biggest battle of the Great War—took place in the longest episode of Game of Thrones. The episode packed suspense, horror, action, and drama into the 82 minutes from start to finish; the tide continuously turned between the living and the dead; the Night King was at his most menacing as an unstoppable force; and the cinematography might have been the best of any episode in the series. So I’ve been stunned about the overall reaction to “The Long Night” after a few days of letting it breathe.

Currently, Season 8’s third episode is at an 8.9 user rating on IMDb, which is generally a pretty accurate consensus on how fans are feeling about the episodes and show overall. I don’t always agree with the IMDb user ratings—for example, “The Dance of Dragons”, when Shireen is burned at the stake, Jorah participates in an epic gladiator scene, and Daenerys and the others are narrowly saved by Drogon at the very last moment, is only a 9.5 instead of closer to a 9.9 like some of the other best episodes such as “The Rains of Castamere” and “Battle of the Bastards”—but the overall consensus on “The Long Night” is shocking to me.

The big complaint about “The Long Night” seems to be that the episode is too dark. When I first heard about this, I thought “too dark” meant it was too dreary and horrible (which the fight between the living and the dead should be) because of all the chaos and death, but the complaint is that it was too dark and people couldn’t see what was going on throughout the episode.

Things being too dark was not an issue whatsoever for me. The dragon fight might have been a little difficult to track, but it’s not easy to have two monstrous beings fight in midair. I recently got a high-end OLED television basically just to have the best picture possible for the end of Game of Thrones, so that helps conveying an accurate image on screen. But older televisions don’t have issue with the lighting on “The Long Night”, as long as you have the right lighting in the room with the television: darkness.

If you watch Game of Thrones at a party with other people, or simply with the lights on or even just a little lighting from another room or from checking your cell phone, that’s an issue. Ideally, you were able to watch the Battle of Winterfell in a cinema-like environment—which basically only requires sitting in a dark room and having the self-control to put your phone down for 90 minutes.

Also, I know some people might have had no other option but to stream the episode (which can decrease the video quality a lot on a bad internet connection) or watch on a laptop, and in that case it’s not surprising there were issues for a chaotic episode like “The Long Night”. But the fast-paced action might have been as big of an issue as darkness for those watching on a small screen or a lower quality video.

For those that were able to watch “The Long Night” in ideal conditions, it might have had the best cinematography of any episode in the series. A lot of the episode was certainly dark, but it was a battle taking place by moonlight, so it should have been dark. Darkness was perfectly contrasted with the fire brought by Melisandre and the dragons, creating breathtaking scenes that hopefully lit up your room with orange brightness compared to the other parts of the episode. The lighting of the arakhs to begin the battle, the fire in Melisandre’s eyes when she lit the trench, and the shot of Jon and Daenerys on their dragons up high in the sky with the moon were all amazing. The musical score was perfect, particularly at the end of the episode when it looked like the Night King—accompanied by his White Walker lieutenants through Winterfell and to the Godswood—would strike down the Three-Eyed Raven as all our heroes would die fighting a seemingly unbeatable enemy.

The situation is unfortunate because people love Game of Thrones, and most of them probably aren’t making their issues with “The Long Night” up (though some people like the be contrarians or just hate great things, and I could see people that haven’t even watched Game of Thrones giving it low ratings on IMDb). And it’s unfortunate for showrunners David Benioff and D.B. Weiss, director Miguel Sapochnik, and the staff that worked incredibly hard on a 55-day shoot for the Battle of Winterfell; they are probably really disappointed a good number of fans aren’t happy with one of the show’s most important episodes—these are people that know what they’re doing after several years of working on the greatest show of all-time.

But for those with non-lighting complaints that still didn’t like “The Long Night”, I’m not sure what people expected from episode. Maybe they wanted more main characters to die, but we lost Edd, Beric, and Lyanna Mormont. Jorah died protecting Daenerys, which was basically his life purpose, and Drogon even grieved in the dramatic moment amidst victory for the living. Melisandre served her life’s purpose by helping defeat the Army of the Dead and was at relative peace after 800 years of living. Theon’s acceptance from another Stark, Bran, and his subsequent death at the hands of the Night King completed perhaps the best character arc in history.

“The Long Night” might not be in consideration for best episode with “The Rains of Castamere” for most people, but the Battle of Winterfell had as much hype as possible, while the Red Wedding came out of nowhere and was an absolute shock that turned the series upside-down. However, “The Long Night” is clearly one of the best episodes of the series, and some people might feel it’s the best. The 8.9 IMDb rating, which might drop lower still, doesn’t do the Battle of Winterfell justice—especially with the main objection being that it was “too dark.”