Home / frontgames / ‘Game of Thrones’: Top Quotes From The Series 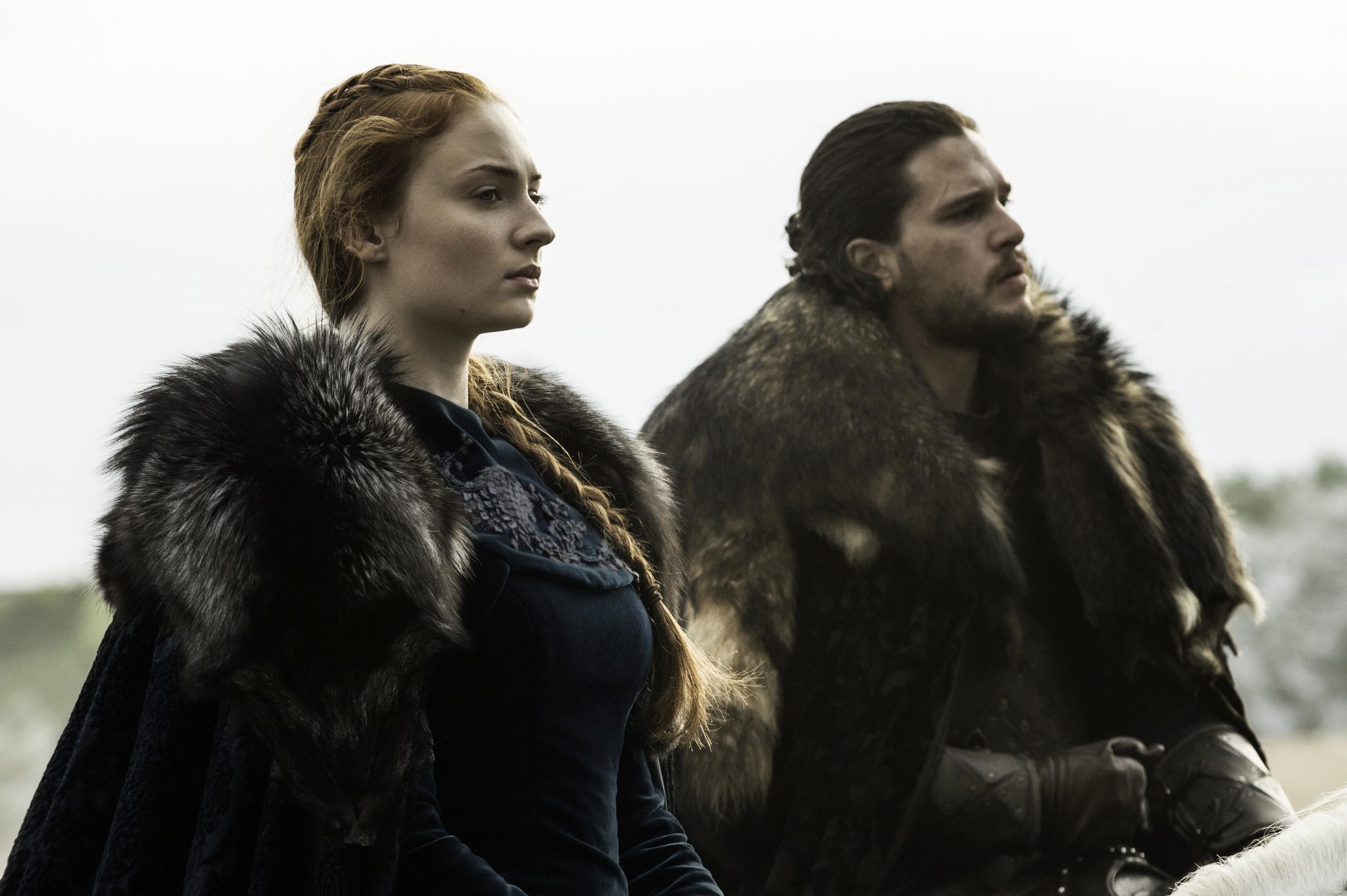 ‘Game of Thrones’: Top Quotes From The Series


While some people were disappointed by the final season of Game of Thrones, we thought it was great—and there’s no question the final six episodes delivered plenty of quoteworthy and important lines. This week, we’ll be going over some of the best parts about the series now that it’s over, and we’re starting today with the best Game of Thrones quotes.

117. “Whilst Lord Janos was hiding with the women and children, Jon Snow was leading. Ser Alliser fought bravely, tis true. When he was wounded, it was Jon who saved us. He took charge of the Wall’s defense, he killed the Magnar of Thenns, he went north to deal with Mance Rayder—knowing it would’ve almost certainly meant his own death. Before that, he led the mission to avenge Lord Commander Mormont. Mormont himself chose Jon to be his steward. He saw something in Jon and now we’ve all seen it too. He may be young, but he’s the commander we turned to when the night was darkest.” – Samwell Tarly

115. “Brothers! A hundred generations have defended this castle! It’s never fallen before; she will not fall tonight! Those are Thenns at our walls! They eat the flesh of the men they kill! Do you want to fill the belly of a Thenn, tonight? Tonight, we fight! And when the sun rises, I promise you, Castle Black will stand! The Night’s Watch will stand! With me now, now with me!” – Alliser Thorne

110. “I don’t believe you.” – Jaime Lannister to Cersei Lannister

109. “Kill me and be cursed. You are no king of mine.” – Rickard Karstark to Robb Stark

104. “I have only loved one woman—only one—my entire life… your sister.” – Littlefinger

102. “Tyrion Lannister, I name you Hand of the Queen.” – Daenerys Targaryen

101. “Arise, Brienne of Tarth, a Knight of the Seven Kingdoms” – Jaime Lannister

100. “When my dragons are grown, we will take back what was stolen from me and destroy those who wronged me. We will lay waste to armies and burn cities to the ground!” – Daenerys Targaryen

99. “Power resides where men believe it resides. It’s a trick. A shadow on the wall. And a very small man can cast a very large shadow.” – Varys to Tyrion Lannister

98. “Dragons are where our partnership ends.” – Bronn to Jaime Lannister

93. “My name is Arya Stark. I want you to know that. The last thing you’re ever going to see is a Stark smiling down at you as you die.” – Arya Stark to Walder Frey

92. “Look around you. We’re all liars here. And every one of us is better than you.” – Littlefinger to Sansa Stark

91. “For the sake of the mother who bore us, I will give you this one night to reconsider. Strike your banners, come to me before dawn, and I will grant you your old seat in the council. I’ll even name you my heir—until a son is born to me. Otherwise, I shall destroy you.” – Stannis Baratheon

88. “This should help you remember!” – Locke to Jaime Lannister

87. “Are you with me, now and always?” – Daenerys Targaryen in speech to the Dothraki

86. “I will be your champion.” – Oberyn Martell to Tyrion Lannister

84. “My real father lost his head at King’s Landing. I made a choice… and I chose wrong.” – Theon Greyjoy

83. “I want to fight for Winterfell, Lady Sansa, if you’ll have me.” – Theon Greyjoy

81. “They say Stannis never smiles… I’ll give him a red smile. From ear to ear.” – Joffrey Baratheon

79. “I don’t fight in tournaments because when I fight a man for real I don’t want him to know what I can do.” – Ned Stark to Jaime Lannister

77. “Half a million… The population of King’s Landing.” – Jaime Lannister on how many lives he has saved

75. “A Targaryen alone in the world is a terrible thing.” – Maester Aemon Targaryen

70. “I’m tired of reading about the achievements of better men.” – Samwell Tarly

67. “He was no dragon. Fire cannot kill a dragon.” – Daenerys Targaryen

66. “And he lived. And I couldn’t keep my promise. And everything that’s happened since then—all this horror that’s come to my family… it’s all because I couldn’t love a motherless child.” – Catelyn Stark

62. “We march to victory, or we march to defeat. But we go forward. Only forward.” – Stannis Baratheon

61. “Sorry about the sapphires.” – Jaime Lannister to Locke

60. “My armies will not stand down. I will not pull them back to the capital. I will march them north to fight alongside you in the Great War. The darkness is coming for us all. We’ll face it together. And when the Great War is over, perhaps you’ll remember I chose to help with no promises or assurances from any of you.” – Cersei Lannister

59. “He would see this country burn if he could be King of the Ashes.” – Varys on Littlefinger

58. “By what right does the wolf judge the lion?” – Jaime Lannister

57. “You were the only one who didn’t treat me like a monster.” – Tyrion Lannister to Jaime Lannister

53. “There’s nothing in the world more powerful than a good story.” – Tyrion

52. “Nothing else matters. Only us.” – Jaime Lannister to Cersei Lannister

51. “I have a tender spot in my heart for cripples, bastards, and broken things.” – Tyrion Lannister

49. “Thousands of men don’t need to die. Only one of us. Let’s end this the old way. You against me.” – Jon Snow to Ramsay Bolton

46. “I will answer injustice with justice.” – Daenerys Targaryen

45. “A lion doesn’t concern himself with the opinions of a sheep.” – Tywin Lannister

44. “There’s great honor in serving the Night’s Watch. The Starks have manned the Wall for thousands of years, and you are a Stark. You may not have my name, but you have my blood.” – Ned Stark to Jon Snow

42. “If you want justice, you’ve come to the wrong place.” – Tyrion Lannister

41. “I’m not going to stop the wheel, I’m going to break the wheel.” – Daenerys Targaryen

38. “They were the shields that guarded the realms of men, and we shall never see their like again.” – Jon Snow

37. “I will take what is mine with fire and blood.” – Daenerys Targaryen

34. “Chaos isn’t a pit. Chaos is a ladder. Many who try to climb it fail, and never get to try again—the fall breaks them. And some are given a chance to climb, but they refuse. They cling to the realm, or the gods, or love. Illusions. Only the ladder is real. The climb is all there is.” – Littlefinger

29. “You will always be my queen.” – Jon Snow to Daenerys Targaryen

28. “When enough people make false promises, words stop meaning anything. Then there are no more answers, only better and better lies.” – Jon Snow

23. “Death is the enemy. The first enemy and the last. The enemy always wins. And we still need to fight him.” – Beric Dondarrion

22. “Let me give you some advice, bastard. Never forget what you are, the rest of the world will not. Wear it like armor, and it can never be used to hurt you.” – Tyrion Lannister to Jon Snow

18. “I will not give my life for Joffrey’s murder and I know I’ll get no justice here, so I will let the gods decide my fate… I demand a trial by combat.” – Tyrion Lannister

16. “You’re a dragon… Be a dragon.” – Olenna Tyrell to Daenerys Targaryen

14. “My name… my real name… is Aegon Targaryen.” – Jon Snow to Daenerys Targaryen

13. “You think my life is some precious thing to me? That I would trade my honor for a few more years… of what? You grew up with actors. You learned their craft and you learnt it well. But I grew up with soldiers. I learned to die a long time ago.” – Ned Stark

12. “For the night is dark and full of terrors.” – Melisandre

10. “If you think this has a happy ending, you haven’t been paying attention.” – Ramsay Bolton

9. “When you play the game of thrones, you win or you die. There is no middle ground.” – Cersei Lannister

6. “The man who passes the sentence should swing the sword.” – Ned Stark

3. “When the snow falls and the white winds blow, the lone wolf dies, but the pack survives.” – Sansa Stark