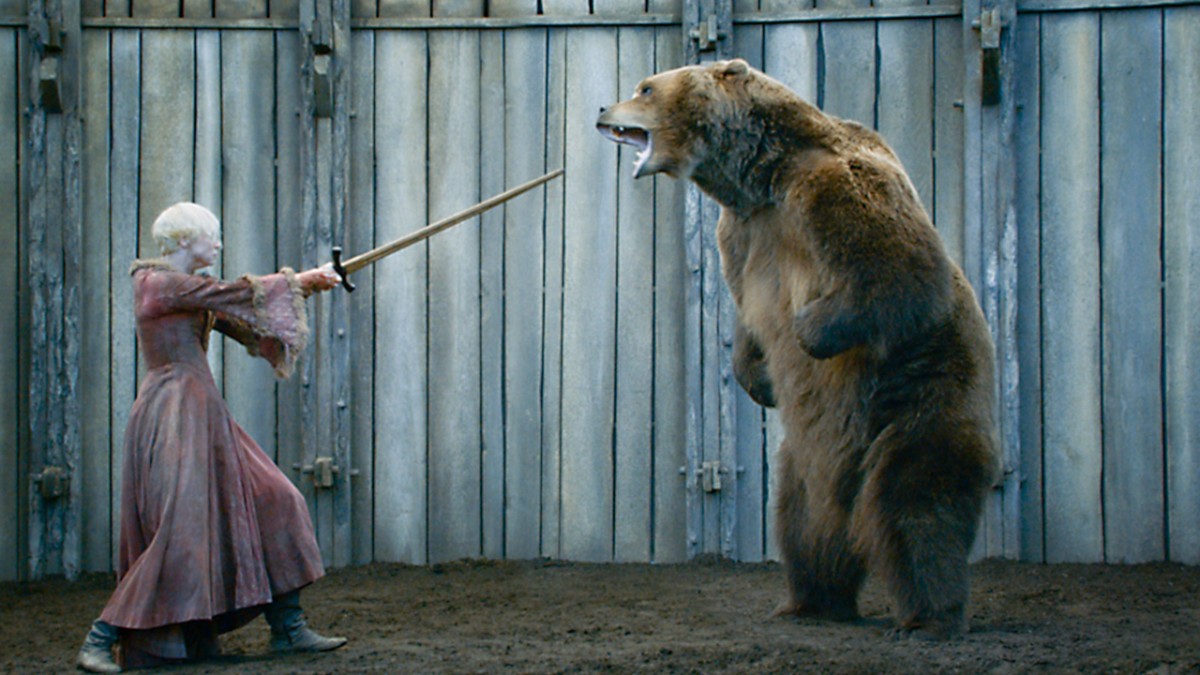 #WinterIsHere Countdown: “The Bear and the Maiden Fair” (S3E7)

Episode: “The Bear and the Maiden Fair” (Season 3, Episode 7)

Tywin Lannister lecturing his grandson Joffrey Baratheon while showing he’s the true world power is a great scene, with Joffrey slouching in the Iron Throne while Tywin looms over him. However, the best moment might be when Talisa tells Robb Stark that she is pregnant. It takes the King in the North a moment to realize what his queen is telling him, but he is set to have an heir, which makes what soon happens to the Starks all the more twisted and heartbreaking.

“Sorry about the sapphires.” – Jaime Lannister to Locke

Parts of this episode were filmed in Los Angeles, because they involve a live actor-bear (named Little Bart), and there are various legal restrictions on international transport of large animals such as bears.

The conclusion of “The Bear and the Maiden Fair” is the reason the episode was named as such, as Brienne was forced to go face-to-face with a huge bear in a pit. Jaime Lannister had been on his way back to King’s Landing, but he found out from Qyburn that Brienne would not be returned home safely. Jaime showed his intelligence and wit by getting Steelshanks—the man responsible for bringing the Lannister knight back home safely—to take him back to Harrenhal after threatening to tell Tywin it was Steelshanks who cut off his hand. When back at Harrenhal and paying off Locke doesn’t work, Jaime decides to jump in the bear pit and steps between the bear and Brienne, intuitively forcing Steelshanks to take out the bear for his own protection—and allowing Jaime to barely get out of the pit alive after saving Brienne. Though he had been a prisoner of Robb Stark for much of the first two seasons, Season 3 is a huge downfall for Jaime, mainly because he lost his hand; but the season really starts the track of redemption for one of the best character arcs in any television series.