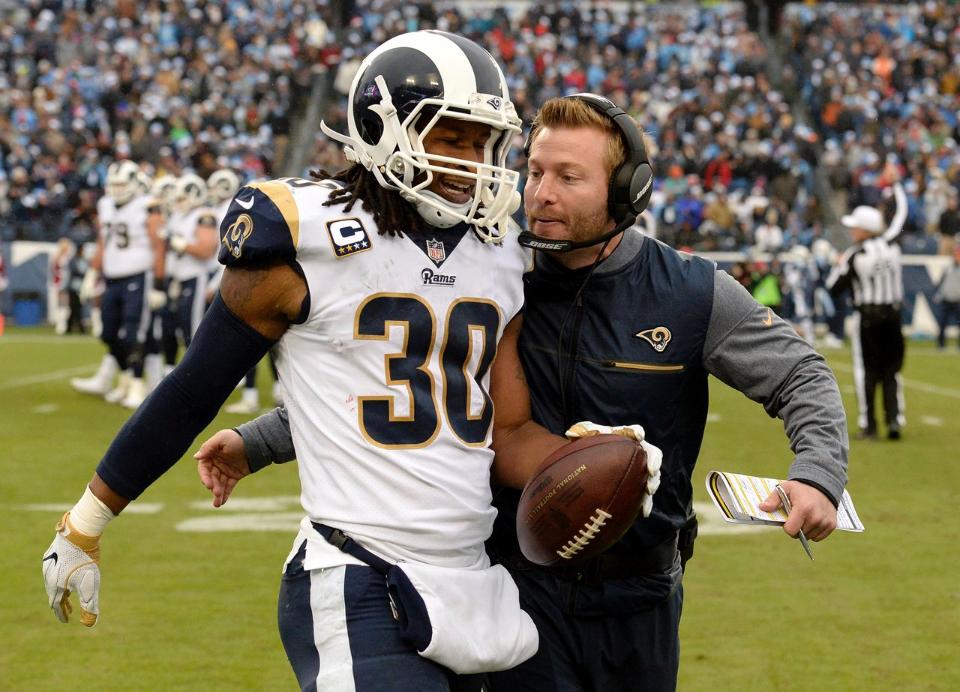 The injury to Carson Wentz paired with the Chiefs going through a major mid-season slump made this a two-man race between Tom Brady and Todd Gurley for the league’s Most Valuable Player award. Toward the end of the year, Brady wasn’t at his best (he had six touchdowns and five interceptions over the final five games), but he did have a game-winning drive against the Steelers that he made look as easy as ever, including converting the two-point attempt which ultimately led to the Steelers pushing it at the end and throwing an interception with overtime in reach. The drive was about as clutch as it gets in the regular season, as it basically secured the one seed in the AFC for New England, which means teams will have to go to Foxborough to take out the defending champs. Overall, the 40-year-old quarterback didn’t show signs of regression (he launched a football 70 yards in the air in Week 6), throwing darts all over the field for 4,577 yards, 32 touchdowns, and eight interceptions, with a 66.3% completion percentage. For most of the season, Brady was as good as ever, which led to him being named first team All-Pro for the third time in his career. His two current MVP awards came during his first two All-Pro campaigns, and the same should happen this season.

Offensive Player of the Year: Todd Gurley | Rams running back

It is pretty unbelievable that some were considering Todd Gurley a bust after a subpar 2016 on a team that couldn’t block a soul and had its coach fired. This year, he was back to looking like the dynamic player that made him one of the top prospects in the 2015 draft, rushing for 1,305 yards and 13 touchdowns along with 788 receiving yards and six receiving touchdowns while pacing the league’s highest scoring offense for the Rams in a complete turnaround from last season’s flat offense. Gurley was fed the ball by the new coaching staff, and he almost always did a ton of damage against opposing defenses.

He was first team All-Pro in a league that might have more top-notch corners than ever, and Xavier Rhodes made the case throughout the season that he’s not only the best player at his position, but the best defensive player in the entire league while locking down top receivers each week to lead the league’s best defense. This is the most difficult award to select a winner for, as Calais Campbell, Aaron Donald, and Rhodes’ teammate Harrison Smith were among the other strong candidates. Rhodes himself argued for Smith to be the Defensive Player of the Year, but I’ll go with the corner.

Offensive Rookie of the Year: Kareem Hunt | Chiefs running back

Rookie Alvin Kamara’s impact for the Saints cannot be understated, but the Chiefs’ Kareem Hunt gets the nod for Offensive Rookie of the Year. Despite only getting one touch in Week 17, Hunt made it count and took it for a 35-yard touchdown that gave him the league lead in rushing. Kansas City’s offensive line looked bad at times this year, but Hunt was still able to average 4.9 yards per carry while showing he can carry the load during his first season in the NFL.

Another Saint finishes as a runner-up, and this one might not be popular—most are already handing Marshon Lattimore the Defensive Rookie of the Year award. However, Tre’Davious White might have been the most valuable player on the entire Bills roster as a rookie. White immediately stepped into a role as a true shutdown corner for Buffalo, and he forced five turnovers in the fourth quarter for a team that probably wouldn’t have been in the playoffs without those key plays. He played in all 16 games compared to Lattimore’s 13, and White should finish in the top five for Defensive Player of the Year, too.

Keenan Allen took all the chatter about whether he could stay healthy for a full season and turned it into a monster season for a Chargers team that went 9-3 down the stretch. Coming off his torn ACL from Week 1 of last season, Allen caught 102 passes for 1,393 yards and six touchdowns while proving to be nearly uncoverable this year. It might not show up in the box score like his NFL-record three straight games with at least ten receptions, 100 yards, and one touchdown, but Allen is also a very willing blocker in the run game.

We already talked about the turnaround for Todd Gurley and the Rams on offense this year, and Sean McVay was the chief architect for it. Los Angeles made a 15.9-point jump in points per game, going from 14.0 last season to 29.9 points this season, which led the league. Some said the 31-year-old was too young to be a head coach, but he has immediately proved them wrong; and in the process, he helped Jared Goff prove wrong those that foolishly classified him as a bust after seven games as a rookie.