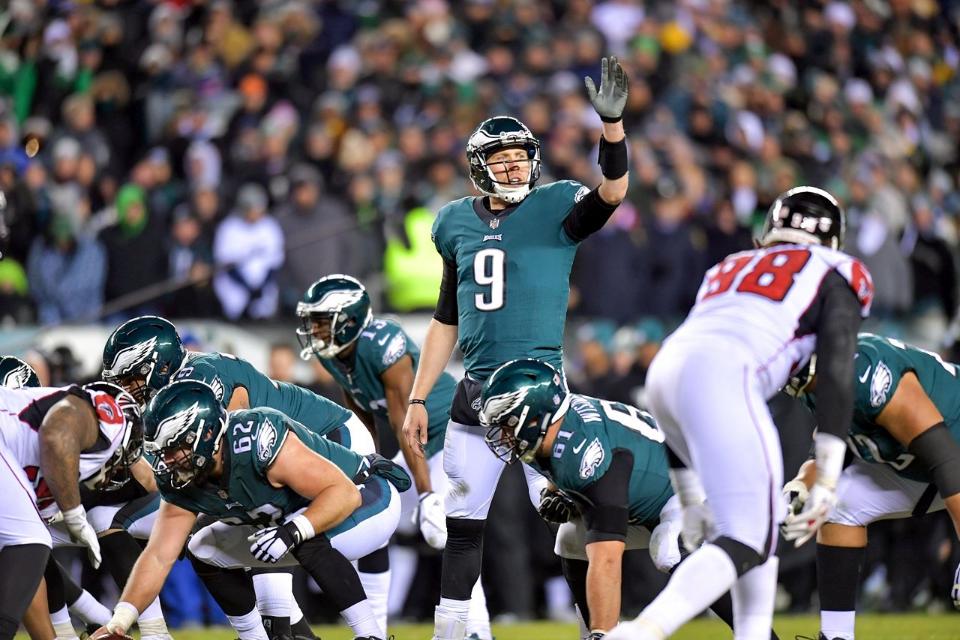 NFL Divisional Round Thoughts And Reaction


Many say the NFL Divisional Round is the best weekend of football, and the NFC side at least lived up to that over the last couple of days. Four teams are now just one game away from the Super Bowl, and from there anything can happen in the Big Game. Here are some fair thoughts and reaction on the field being cut from eight teams to four teams.

The one-seeded Eagles were underdogs against the sixth-seeded Falcons, and the team clearly played into that and channeled it into extra motivation heading into the game. Now, the Eagles are underdogs in the NFC Championship Game against the Vikings, and many fans bought the “underdog” masks that right tackle Lane Johnson wore like a WWE wrestler after Saturday’s win. Every team this time of year loves to play the card of “nobody believes in us,” but the Eagles might actually be able to fittingly play it. Philadelphia is perhaps the city that can best play as the underdog, and Lincoln Financial Field is likely to be going crazy when they host the Vikings on Sunday night.

After the Eagles’ win over the Falcons on Saturday, a lot of people were still insisting Nick Foles didn’t play well and is a huge question mark heading into the NFC Championship. While he’s not Drew Brees or Aaron Rodgers, Foles has been getting the job done since stepping in as the starter for the injured Carson Wentz. Cris Collinsworth and Al Michaels on the NBC broadcast must have been watching a different game, because they insisted on Foles being extremely shaky to start the game when that clearly was not the case. From there, others took the lead of the two guys with the microphone, insisting Foles is some high-school level quarterback that is a major liability. Maybe he won’t play well against the Vikings in the NFC title game, but Minnesota can do that to a lot of quarterbacks.

New England’s defense is heating up

Anyone that loves football could go on about the offense of the Patriots all day. Tom Brady looks like he’s in his prime at 40, and they can do so many things to give a defense headaches; also, Danny Amendola, who had 11 receptions for 112 yards on Saturday night in the win over Tennessee, appears poised to be a big-time target like teammate Julian Edelman usually is in the postseason. Amendola has come up clutch in big playoff games and Super Bowls, and he obviously has the trust of Brady and the coaching staff.

The defense paired with the NFL’s best offense, however, makes New England look like the clear Super Bowl favorites of the teams remaining. Marcus Mariota was sacked eight times by the Patriots, and he had to make some great throws to get the ball in the end zone for the Titans. Not only did the Patriots pressure Mariota, but they shut down Derrick Henry and the running game. They should be able to do the same to the Jaguars and a potential NFC opponent in the Super Bowl.

The Steelers are too emotional

I really like Steelers head coach Mike Tomlin and most of their awesome players like Antonio Brown, Le’Veon Bell, JuJu Smith-Schuster, and Ben Roethlisberger, but they’re simply not as good when things aren’t going well and they get emotional. Take the end of the game, for example. They still had a realistic shot at winning the game, even down by ten points with a couple of minutes to go, but the team didn’t appear to have any energy and almost seemed resigned to take the loss. Also, it’s probably fair to say the team was a little too focused on a potential matchup with the Patriots in the AFC Championship Game. One week at a time is the way to go, as the Patriots and all other great teams have shown throughout the history of the league.

Marcus Williams is a class act

Everyone saw the final play for the Vikings, in which rookie safety Marcus Williams was seemingly in a position to make a play on Stefon Diggs but flew by him without making contact. People instantly jumped on the young player and pointed to him for blowing the game himself. However, Diggs still might have been able to get out of bounds if Williams came up to hit him; and also, it’s easy to blame Williams for not making the play on slow-motion replays, but he was flying up there trying to make a play and Diggs kind of stopped on a dime and jumped up to make a spectacular play.

I don’t see how you can’t feel for Williams, who handled the situation after the game with true class by answering questions from reporters and not making any excuses for the play. He was reportedly emotional before the interview, and I’m sure he was after, but he put on a brave face and answered questions like a man. It was great to see people like Chris Spielman and Steve Gleason give words of encouragement while noting that Williams had a great rookie year. And Williams got the interception that basically got the Saints back in the game. He should hold his head high and hopefully continue on to have a fantastic career.

There aren’t many better stories out there than Case Keenum, who is obviously a genuinely good guy that’s taking advantage of an excellent opportunity on a very talented team. His reaction to the game-winning touchdown yesterday was simply amazing, and he also played amazing for much of the game—including the perfect throw on the game-winner to Diggs. However, the interception that he threw up off his back foot in the third quarter is something that cannot happen. With a defense as good as Minnesota’s, Keenum needs to keep the offense moving and make some of the athletic plays and pinpoint throws like he’s been doing all season, but he can’t make a big mistake to put the defense in bad positions. Judging from what Troy Aikman was saying during the FOX broadcast, Vikings head coach Mike Zimmer would have no trouble going with Sam Bradford, who he said is a better passer than Keenum. No doubt, the thrilling end to the game will give Keenum a longer leash, but the Vikings need to make it clear that he doesn’t have to do too much for them to play a Super Bowl in their home stadium.