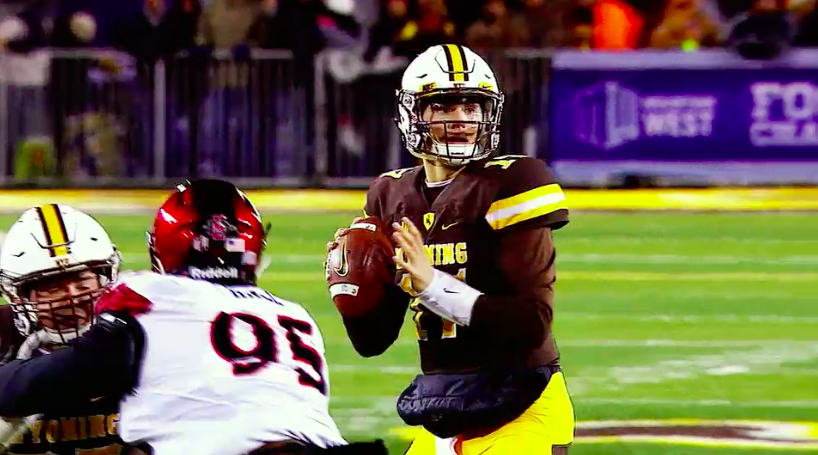 
The Senior Bowl is concluded, so my overall prospect rankings have been updated and expanded to a top 150. If you missed my positional rankings, you can check them out here.

Saquon Barkley will deservedly get a ton of praise leading up to the draft, and much of it will come from me. You can stick Barkley in any system and he will do everything at an elite level. I don’t think I’m exaggerating when I say he’s the best college football player I’ve ever seen, and his game should translate immediately to the NFL. Besides being a generational talent, the 20-year-old is a great person with legendary work ethic, which only solidifies him as the best prospect in recent memory.

The quarterback class will be intensely debated over the next few months, but while most people are talking about Sam Darnold or Josh Rosen as the best signal-caller in the 2018 crop, I like Josh Allen. The gunslinger out of Wyoming has an absolute cannon for a right arm to make long throws to the outside with ease, and more importantly, he can put touch on his passes at all levels. Arm strength isn’t at the top of the list for a quarterback, but it certainly doesn’t hurt to be able to throw frozen ropes, especially for a guy like Allen that played in a pro-style offense and is also a strong leader, intelligent, and very mobile.

Anyone who watched the College Football Playoff saw Roquan Smith all over the field for the Bulldogs, as he racked up a combined 24 tackles, including several for a loss and at clutch moments. He’s been likened to plenty of great linebackers, but I think he’s most comparable to another former Georgia star in Thomas Davis. Neither is the biggest guy on the field, but they are able to quickly recognize plays and use their speed and underrated strength to make plays.

We still have a long way to go in the pre-draft process, but as of now, I think Bradley Chubb is far and away the best pass rusher in this year’s class. Chubb has an unrivaled first step and top-end agility for a defensive player, which allowed him to record 23.0 tackles for loss and 10.0 sacks as a senior despite constant double teams. I would be surprised if he wasn’t a top-five pick.

Perhaps the most dangerous college football player of all-time, Lamar Jackson can absolutely play quarterback at the next level. He’s basically just as dynamic as Michael Vick, but bigger and much more advanced as a passer coming out of college. And even if his arm isn’t quite as strong as Vick’s was, Jackson still has a cannon. He will be a terror to opposing defenses if a coaching staff can slightly modify their offense to take advantage of his unique, game-breaking skillset.

It’s not often that a guard is so well-regarded as a prospect, but Nelson was a breathing bulldozer for the Fighting Irish in 2017. Not only can the New Jersey native drive defensive lineman and linebackers into oblivion, but he is also extraordinary in pass protection thanks to his athleticism and awareness on the interior. Nelson is worth a premium selection in April.

Everyone knows how explosive Lamar Jackson and Saquon Barkley are at their respective positions, and Christian Kirk brings that same kind of upside at wide receiver. The Texas A&M star actually saw his yardage decrease in each of his three seasons at College Station, but his NFL outlook has never wavered. Kirk is just as likely to put a double move on a defender to get deep as he is to house a short pass for a touchdown, and his hands match his explosiveness.

Jaire Alexander missed most of the 2017 season with various injuries, but he remains a top prospect for me as most versatile cornerback in the draft. Louisville’s defense struggled when their star defender was out, as he can shut down opposing receivers, is an above-average tackler, and can turn defense into offense with phenomenal ball skills. Alexander forced three turnovers (two interceptions) in 2016 against Deshaun Watson.

Like last year’s draft class with Mashon Lattimore and Tre’Davious White, the 2018 class has two elite prospects at the cornerback position in Josh Jackson and the aforementioned Jaire Alexander. Jackson led the nation with eight interceptions (including two pick-sixes) as one of the breakout stars of the season, and he showed the anticipation and has the length to frustrate receivers and quarterbacks by jumping routes.

People in the media don’t seem to be very high on Kerryon Johnson, but I don’t see how he isn’t a Day 1 pick after what he did this season at Auburn. Johnson displays similar patience to Le’Veon Bell behind the line of scrimmage, and he looks like David Johnson with the ball in his hands as an effortless, long-striding runner that can easily shed arm tackles and make people miss in the open field.

It’s almost unfair that Vita Vea can move the way he does at six-foot-five, 340 pounds. The star defensive lineman is basically football’s version of “The Mountain” from Game of Thrones with the ability to do things that a monster human being probably shouldn’t be able to do, as Vea dominates against the run with both strength and quickness to plug running lanes or make the play himself. He should be able to thrive at any interior position in any defensive scheme at the next level.

Fitzpatrick played everywhere for Nick Saban’s defense, and the legendary head coach is such a fan of his versatile defensive back that teammates have joked that he’s “Coach Saban’s son.” I see him as more of a do-it-all safety than cornerback, but Fitzpatrick should be able to cover elite tight ends and slot receivers while racking up tackles in the box and out in in space.

Ridley is the most polished wideout in this year’s class, and he’s similar to Minkah Fitzpatrick on the defensive side of that ball in that he will be able to do it all—take the top off the defense, make contested catches over the middle, pickup key first downs, and play either the X, Z, or slot. Despite a lack of big numbers at Alabama, Ridley is a smooth, all-around receiver who should become an instant contributor in the league.

Speed at the linebacker position has become increasingly important in the NFL, and Tremaine Edmunds has plenty of it. Sized like an NBA wing, Edmunds has tremendous range when tracking down ball-carriers. He can also spy the quarterback and rush on either a straight blitz or delayed blitz with exceptional closing burst.

For me, the interview process would be key when evaluating Baker Mayfield because I think the character concerns—both on and off the field—are real. I am just rankings guys on the field, though, and Mayfield is extremely accurate and confident both in and out of the pocket. He also has a strong arm for his size and was able to put the ball on the money at Oklahoma. That said, he didn’t have to make many tight-window throws in college, and I don’t think he is fast enough or elusive enough to consistently get away from NFL defenders. I still have him as a mid-first-round prospect, but Mayfield is far from a sure thing.

Kam Chancellor has been a comparison often used for Derwin James, but James is faster, more versatile, and not quite as thumping (I mean that as a compliment to Chancellor). The Florida State standout is solid in man-to-man coverage and can come up from his safety spot to make plays off the edge and up the middle as a blitzer. He could be a game-wrecker at the next level.

Ward is a sticky cover corner with great quickness and long arms for his size at five-foot-ten. His length and explosiveness also makes him very good in zone coverage, but he doesn’t have the ball skills that Jaire Alexander or Josh Jackson do in this year’s class with just two career interceptions at Ohio State. At worst, Ward should be an elite slot cornerback in the league, but I think he will be fine on the perimeter.

The talent was evident with Darnold in two seasons as the starter for USC, as he throws with great anticipation and is very creative when the play breaks down, and he certainly has the size and intangibles to be successful. However, he’s thrown for 22 interceptions in 27 starts, and many of them are simply head-scratching, especially for a top quarterback prospect. Darnold also fumbled far too often for the Trojans. My concern is that, similar to Jameis Winston coming out of Florida State, the turnovers come with the talent. Hopefully Darnold can get with a good coaching staff to get the best out of him.

Wynn was an exceptional left tackle for Georgia all year in 2017, and I would have liked him as a top-50 prospect had he been staying outside for the draft process. With the move inside, though, he is quickly rising. Wynn played guard early in his college career, and he has the ability to dominate in all schemes at the next level with strength, quickness, and the right mental makeup in the trenches.

Michel’s stock really jumped after an impressive College Football Playoff run where he was able to display his balance, quickness, vision, and speed for the Bulldogs. The senior averaged a career-high 7.9 yards per carry and scored 16 times on the ground as he split time with Nick Chubb, and despite only nine receptions in 2017, he has shown the ability to be an effective pass-catcher over his four years. If Michel can be a solid pass protector at the next level, he won’t need to leave the field.