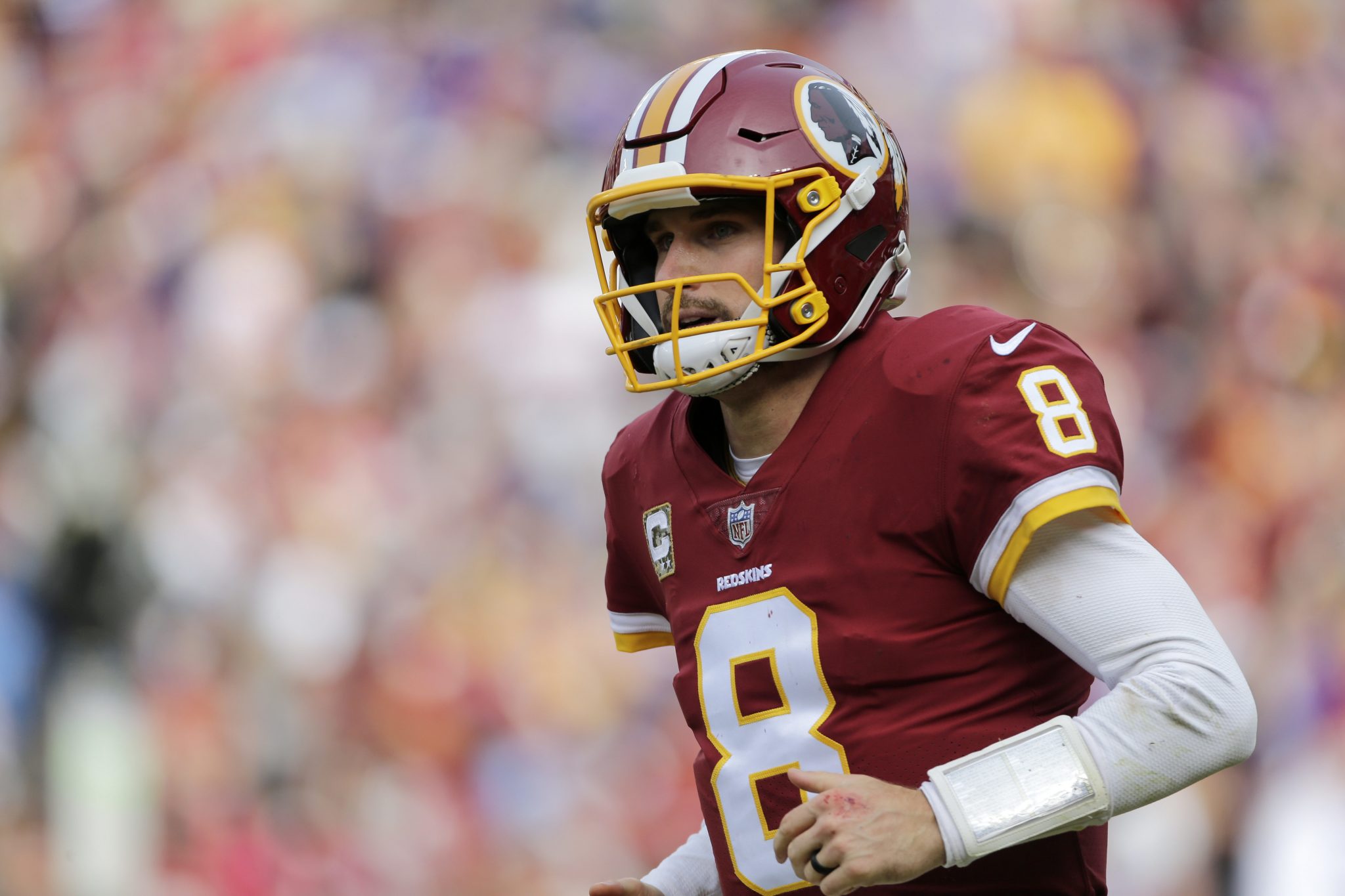 Case Keenum must have taken a hint and decided the Vikings were focused on Kirk Cousins, so he wisely did a deal with John Elway and the Broncos before anyone else, ensuring he had both a starting job and an awesome payday after his excellent 2016 season with Minnesota. While the roster in Denver clearly isn’t as strong, it’s a similar offensive situation to the one Keenum had last year—especially two Pro Bowl receivers in Demaryius Thomas and Emmanuel Sanders—so there is reason to be optimistic about him in Bill Musgrave’s offense. Keep in mind, Musgrave was with Pat Shurmur (who was Keenum’s offensive coordinator with the Vikings last year) under Chip Kelly in Philadelphia. He might be as good a bet as anyone to get as much out of Keenum as Shurmur did last season.

Unsurprisingly, Drew Brees re-signed in New Orleans. It could have been a disaster for the Saints if he decided to take more money and go elsewhere, which he could have done, but it doesn’t look like Brees will play anywhere other than New Orleans to end his career.

The most interesting quarterback situation this offseason was the one in Minnesota, and they decided to go all-in on Kirk Cousins with a reported three-year, fully guaranteed deal. Personally, I would have attempted to keep Sam Bradford with Teddy Bridgewater as insurance, and I think the Vikings might like a healthy Bradford as a quarterback better than they do Cousins. But Bradford’s unfortunate injury history probably made it difficult for them to trust him after the mysterious knee issues that popped up and basically took away his entire 2017 season.

Meanwhile, Cousins hasn’t missed a game as the Redskins starter, so the Vikings should be able to rely on him being there for deep playoff runs with their elite defense. However, it’s worth noting Jay Gruden and the Redskins let him go and decided to bring in Alex Smith instead, and considering Cousins has been fully healthy during his time there, it wasn’t health thing like it was Bradford. Washington will get a compensatory pick for Cousins leaving, but to me, it raises questions when a team lets their quarterback walk. Historically, teams don’t let fully healthy supposed franchise quarterbacks in their prime go: Drew Brees and Peyton Manning were both hurt when they became free agents. There’s no denying Cousins will be in a great situation with the Vikings, but we’ll see how it works out.

And with Cousins taking the prized starting slot in Minnesota, Sam Bradford is now headed to Arizona on a one-year deal (with a team option for a second year). Carson Palmer had a lot of success during his time with the Cardinals, and Bradford is arguably an even better passer than Palmer. The offensive line must be built up, and the team needs to add more weapons to go along with David Johnson and Larry Fitzgerald, but the trio of Bradford, Johnson, and Fitz has the potential to be among the best in the NFL.

I wanted to write something ahead of free agency about Teddy Bridgewater and his ability to be the steal of free agency, but I just didn’t have time to do it—but it should hopefully come at some point this offseason. The Jets might have missed out on Kirk Cousins, but it’s hard not to love bringing back Josh McCown and adding Bridgewater to the mix. Both are extremely-high-character individuals that are not only great for a quarterback room, but they can get it done on the field, too. Having the 25-year-old Bridgewater and the veteran McCown means the Jets could go without drafting a quarterback. But if they do end up drafting one of the signal-callers early in next month’s draft, the situation with two real professionals and great examples in McCown and Bridgewater is hard to beat.

As for A.J. McCarron, he might be the odd man out despite winning the ability to become an unrestricted free agent, and there hasn’t been much talk about where he might land. The Bills are still the place that seems to have an open spot, but they might be destined to trade up for a quarterback in the draft and start them immediately. McCarron might have to settle for a backup job, and teams with a need there should go after him if that becomes the case.

The Bears and Chiefs could have scary offenses

It was no secret the Bears were going to try and surround second-year quarterback Mitchell Trubisky with more talent this year, and they were very aggressive in getting deals done with wide receiver Allen Robinson, wide receiver Taylor Gabriel, and tight end Trey Burton. Robinson gives them a former 1,400-yard, 14-touchdown all-around receiver that Trubisky can just throw the ball up to for him to go and get; Gabriel should match up well with Trubisky’s deep ball ability; and Burton gives them an athletic and versatile tight end that can also line up in the slot. New head coach Matt Nagy’s offense could be a ton of fun in year one.

Sammy Watkins surprisingly got $2 million more per year than Robinson, and he’s joining an outstanding situation in Kansas City with Andy Reid. Chiefs GM Brett Veach said they wanted to get speed to help unleash the arm of new starting quarterback Patrick Mahomes, and Watkins delivers just that—along with strong hands and scoring ability in the red zone. In 2015 against the Chiefs, Watkins went off for six catches for 158 yards and two touchdowns, so they saw first-hand his skill as a playmaker. The ability of Tyreek Hill and Watkins to get deep on most corners in one-on-one coverage, along with Mahomes’ ability to throw the ball 80 yards—not to mention Kareem Hunt and Travis Kelce also being in the mix—could help make a scary-good offense.

Another note on the Robinson and Watkins deals: They are both only 24 years old and can get another huge contract when they are still right in the middle of their prime at 27—which is also the year there will be a new CBA.

The middle of the field is also important

While it’s easy to get excited about great receivers like Allen Robinson and Sammy Watkins signing, the middle of the field is very important in today’s NFL. The Jaguars are signing Andrew Norwell to a huge contract that’s reportedly worth $66.5 million over five seasons, and that tells all about what’s going on in the NFL right now. With guys like Aaron Donald and Fletcher Cox in the middle of defenses, it’s important to have guys that can stop them from wreaking havoc on offenses. As Louis Riddick said, follow the money to realize the emphasis teams are placing on offensive linemen, defensive linemen, and linebackers.

The Packers had an up-and-down day

Green Bay said they would be more aggressive in free agency this offseason, and they had a couple of big acquisitions with tight end Jimmy Graham defensive lineman Muhammad Wilkerson—two former All-Pros. If you watched any of the Seahawks during the middle of last season, you probably saw Graham as an unstoppable force down by the goal line—defenses simply couldn’t stop him in jump-ball and back-shoulder situations. Rodgers excels at putting the ball wherever he wants on back-shoulder throws, so the pairing should be excellent. And Wilkerson just got a huge contract from the Jets a couple years ago for a reason, and he’s still only 28 years old.

However, the Packers also released former All-Pro receiver Jordy Nelson after ten seasons, and clearly Aaron Rodgers (and probably most teammates) were not too happy with the decision. Davante Adams and company should pick up the slack, but Rodgers and Nelson had perhaps the league’s best quarterback-receiver connection over the last several years. The decision to release Nelson could come back to hurt the Packers.

Will anyone back out of a deal?

We have not seen it happen often, but these deals are not official and cannot be official until 4:00 PM ET today. It’s possible someone decides against their initial decision and backs out of a deal with a team. After Danny Amendola’s shocking agreement with the Dolphins, perhaps Tom Brady, Rob Gronkowski, Julian Edelman, and company can try and convince their super-clutch playoff performer to stay in New England. An Instagram post from Brady indicates this is the end for Amendola with the Pats, but who knows?

The Titans continue adding pieces from the Patriots

After former Patriots front office man and current Titans GM Jon Robinson signed cornerback Logan Ryan from New England last offseason and guard Josh Kline from New England in 2016, he’s adding a couple more Patriots already this offseason: running back Dion Lewis and cornerback Malcolm Butler. The Super Bowl XLIX hero Butler gives the Titans one of the best and deepest cornerback groups in the NFL. And while I was excited to see Derrick Henry perhaps get a massive workload for Tennessee, adding Dion Lewis will create a formidable thunder-and-lightning combination in the backfield for the Titans.

With the legendary Dick LeBeau as the defensive coordinator and the promising Matt LaFleur as the offensive coordinator, first-year head coach Mike Vrabel and these new additions could help the Titans emerge at the top of the group behind Brady, Belichick, and the Patriots in the AFC.