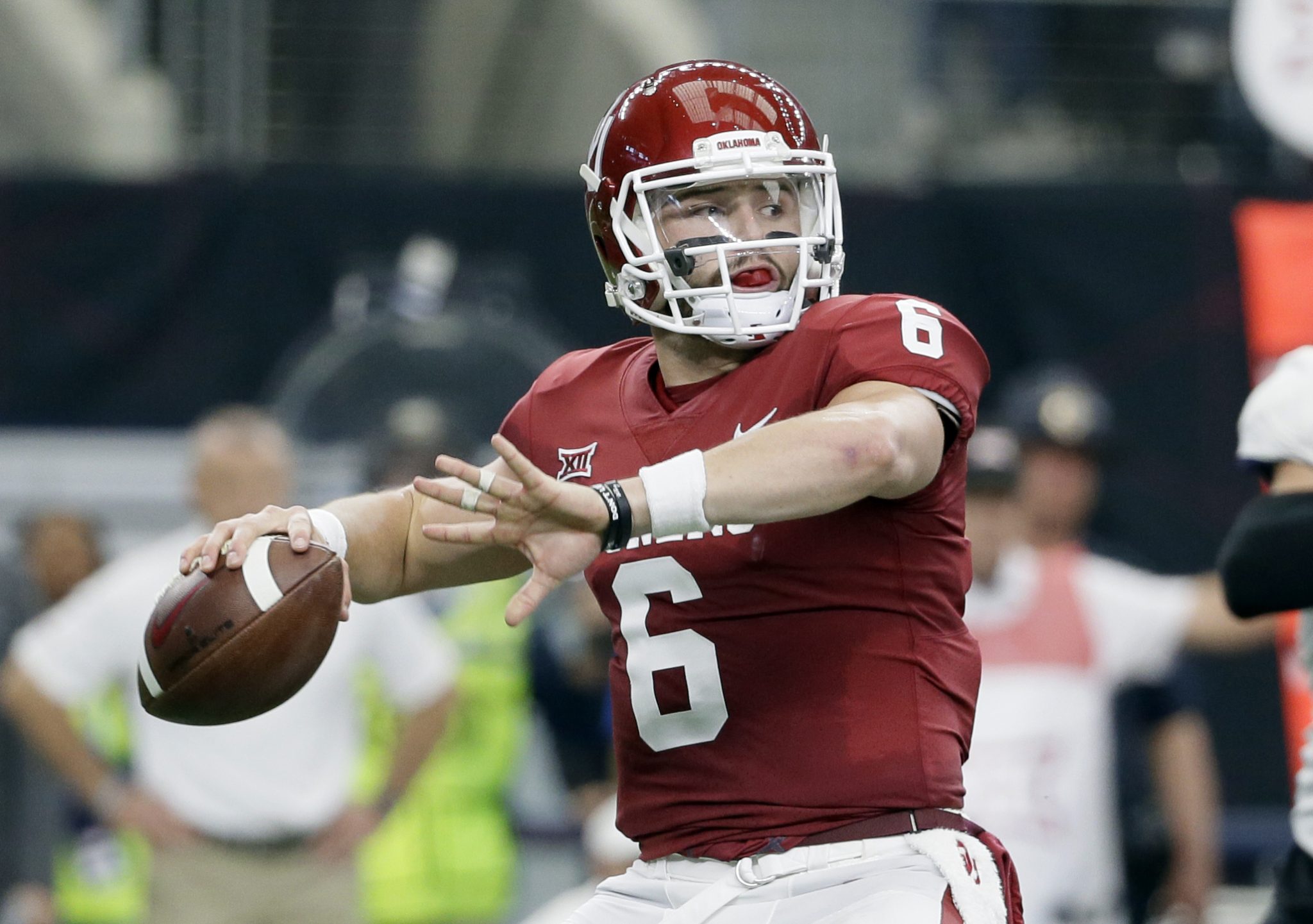 
With the 2018 NFL Scouting Combine basically a couple weeks away, I’m releasing my first mock draft of the year. Keep in mind, this is what I think will happen, not necessarily what I would do. Also, a lot will change with a long way to go before the draft.

We probably won’t know who the Browns are taking until the pick is in, but it would be a shock if they didn’t take a quarterback with one of the top-five picks. Right now, I think Josh Allen seems like the prototypical quarterback for both GM John Dorsey and head coach Hue Jackson.

Pat Shurmur could go after a signal-caller to succeed Eli Manning if he loves one of the available prospects, but pairing an elite running back like Saquon Barkley with Odell Beckham on the outside should extend Eli’s career.

Indianapolis needs help along the offensive line and all around on defense, so they get the best pass rusher in this year’s class with the third pick. Chubb will be tasked with getting after the young and talent quarterbacks in the division as soon as he steps on the field.

A best-case scenario for the Browns would probably be the quarterback they like and Saquon Barkley, but with the Penn State star gone, they could get a favorite of Nick Saban’s in versatile defender Minkah Fitzpatrick.

This pick is assuming Kirk Cousins goes to Denver (just a hunch), so it could obviously change if that’s not what happens. Nelson is a mauler on the interior.

The Jets will also be in play for Cousins, but the might also want to build this thing with a younger quarterback at the helm. Sam Darnold has all the intangibles of a franchise guy.

Tampa Bay could go in a lot of different directions here, including trading down. If they stay put, James would provide an intimidating presence on the back end of the defense.

Ridley to the Bears seems like a perfect fit, but we’ll have to see if GM Ryan Pace feels the same way. Perhaps the Bears will be aggressive in free agency to help out Mitchell Trubisky, which would allow them to look elsewhere here.

Now that last year’s first-round pick Reuben Foster has been arrested on an assault weapon charge and accused of domestic violence, his future is very much in doubt. Roquan Smith brings all the same talent without the headaches, so it wouldn’t be surprising to see GM John Lynch simply take him as a replacement.

Jon Gruden back on the sidelines is going to be awesome, and he should have a ton of control in the draft, too. Josh Jackson is a long, rangy corner that can take the ball away, and Gruden would probably love to make him his first pick as they remake the cornerback group.

I think Adam Gase genuinely likes Ryan Tannehill as his starter, but he could also have a really high grade on Mayfield as an uber-accurate passer, which would make it difficult to pass on him. Sitting behind Tannehill would give Mayfield the chance to get used to the speed of NFL defenders.

The Bengals absolutely need to sure up the offensive line, so unless another player falls to them, there’s a good chance they go after whoever they deem the best tackle here. Connor Williams has some flaws, but his upside is that of a franchise left tackle.

Washington solved their quarterback problems with a savvy trade to get Alex Smith, but he turns 34 in May, and the Redskins don’t have a successor on the roster. Josh Rosen has talent, and behind Smith (who has no problems playing ahead of a high draft pick), he would have a few years to learn how to be a pro.

It would be interesting to see Edmunds’ role with the Packers, but they need talent on defense any way they can get it. The Virginia Tech product could be another versatile piece along with 32-year-old Clay Matthews.

Arizona could target a quarterback if one is available, but they might want to be sure they could protect him. Orlando Brown is a monster tackle that should be able to play either side of the line.

The Ravens need playmakers for Joe Flacco, and Christian Kirk is probably the most explosive wideout in the draft. Ozzie Newsome might want to avoid the position after Breshad Perriman disappointed, but I think Kirk is a much better player and will also contribute as a returner.

Los Angeles has an emerging defense with three (or four with Jason Verrett healthy) cornerbacks and two elite pass rushers, but they still need some help up the middle. Putting Vita Vea on the line with Melvin Ingram and Joey Bosa is a scary thought.

Duane Brown is entering the final year of his deal after being acquired via trade last season, so why not get a tackle that’s been compared to him? Mike McGlinchey could bookend with Brown in 2018 before taking over on Russell Wilson’s blindside for the future.

Just putting myself in Jerry Jones’ shoes, he’s going to want to add playmakers for Dak Prescott to prove he’s a star. I don’t think that’s a bad idea, either, especially with James Washington’s skillset forcing defenses to respect the deep ball.

I’m not sure what scheme Matt Patricia will run in his first year as head coach of the Lions, but he might adapt to his personnel like he and Bill Belichick did with the Patriots. Either way, Da’Ron Payne is scheme-versatile and should help stud linebacker Jarrad Davis make plays behind him.

The Bills had an elite corner (Tra’Davious White) fall to them with the 27th pick of last year’s draft, and they could get another steal here with Ward to create arguably the best secondary in the NFL.

Running back could be an option, but in a deep class, Buffalo can afford to wait. Instead, they get a versatile offensive lineman in Isaiah Wynn, who might be able to play literally all five spots at the next level.

Los Angeles will be in the market for a cornerback if Trumaine Johnson walks in free agency, and Isaiah Oliver is another big-bodied cover man that might have even more upside.

Carolina needs their playmakers to stay healthy, but Christian McCaffrey, Devin Funchess, Greg Olsen, and Curtis Samuel isn’t a bad group by any means. However, they need to be able to get a push up front to run the ball, so Price could either replace an ineffective Ryan Kalil at center or start his career at guard.

The Titans drafted Adoree’ Jackson and signed Logan Ryan last year, but if they want to get through Brady and Roethlisberger in the AFC, they will need three guys that can cover. Jaire Alexander gives them that and more.

Atlanta doesn’t have many holes on their roster, but with Dontari Poe hitting free agency, they could upgrade with Hurst’s versatility to pair with Grady Jarrett on the defensive line.

The Saints also don’t have many holes on their roster, so they could make a luxury pick here and take Hayden Hurst to help out Drew Brees as his career winds down.

I would say we will have a better idea about Le’Veon Bell by April’s draft, but that might not be true if the contract dispute goes into the summer (or even the regular season). Pittsburgh could end up deciding that it’s not worth waiting, especially if Kerryon Johnson—who has been compared to Bell—is on the board.

Lamar Jackson could wind up going a lot higher than this, but he might be better off falling to his hometown team. Jackson in Jacksonville would be really, really fun.

Minnesota is set defensively and has a great collection of skill-position players, so a high-upside tackle prospect could pay dividends in the future. Okorafor might not be available if he impresses at the combine.

Bill Belichick knows firsthand what Hall-of-Famer Jason Taylor did for Miami in the AFC East, and he could be getting a clone here with Lorenzo Carter.

Philadelphia could look to improve the depth on the offensive line or in the secondary, but Davenport would give them yet another pass rusher to rotate with their current core.