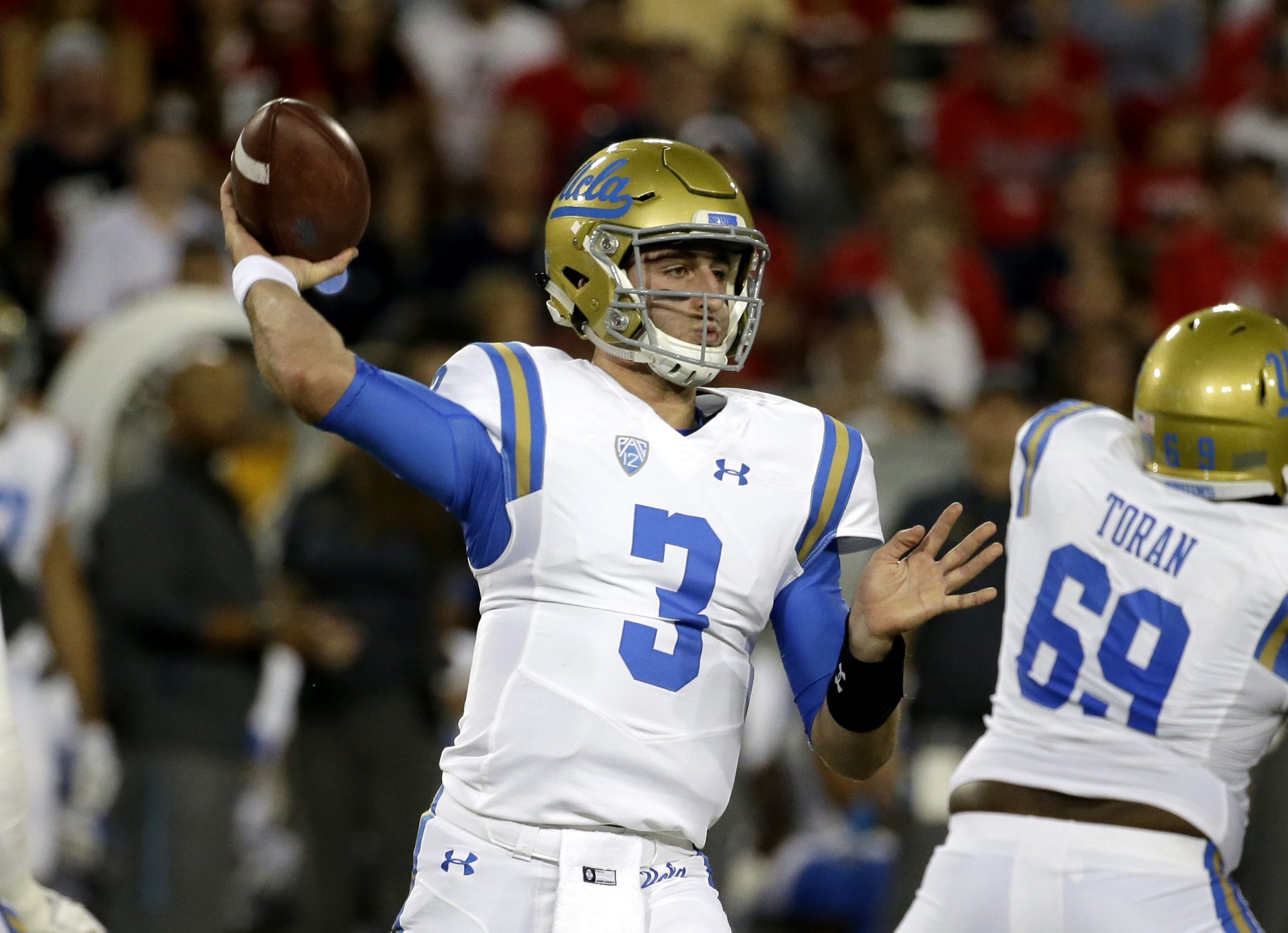 
The 2018 NFL Scouting Combine is officially in the books, and I have a significantly clearer picture of the prospects and landscape of the league since my first mock draft. Things will change a bunch when we hit free agency, particularly at the quarterback position, but these are my current predictions for the first round next month.

NFL Network reported this weekend that Saquon Barkley is a serious candidate to go first overall, and if the Browns take the best player available, Barkley should be the pick. He will transform whatever offense he winds up in.

I think the second- and third-overall picks will be prime trade-up spots even if the Browns don’t pass on a signal-caller, so that would be especially true if they take Barkley. I think Broncos GM John Elway will see a lot of himself in Josh Allen, who is a great athlete with a cannon.

Chubb is the top pass rusher in this year’s class, and Indianapolis needs to get after the young quarterbacks in the AFC South. He would be a perfect fit in Indy’s new 4-3 scheme.

There is a lot of smoke this time of year, but NFL Network’s Mike Garafolo backed up the report from colleague Ian Rapoport about Barkley being in the mix for the first-overall pick, and also adding that there is “very strong buzz” about Cleveland liking Baker Mayfield “a lot.” For his part, Mayfield said at the Combine, “If anybody’s going to turn [Cleveland] around, it’d be me.”

I think the Giants want Saquon Barkley, but if he’s not there, they could probably move below a quarterback-needy team to get extra picks and still safely get their other top guy in Quenton Nelson. Pat Shurmur knows his offense won’t be effective if they can’t block.

The Jets could address the quarterback position in free agency, but unless they win the Kirk Cousins sweepstakes, they probably shouldn’t be ruled out of taking one in the draft, too. There actually hasn’t been much talk about Darnold going here, but that could mean New York doesn’t want their love for him leaking.

Ridley to Chicago just seems like an easy fit, but things could change if the Bears are somehow able to get Allen Robinson or Sammy Watkins as a big-time perimeter threat in free agency.

San Francisco won the coin toss for the ninth-overall pick over Oakland, and that’s a huge deal for two teams with similar needs and both in a potential spot to trade back for those seeking a quarterback. I think GM John Lynch will want to stay put to get a tough, man-to-man corner in Denzel Ward.

Khalil Mack rushing the passer and Roquan Smith making plays behind him? Jon Gruden might run the card up himself if he gets a chance to add the playmaking linebacker to his defense as he looks to bring the Silver and Black back to prominence.

At this point, it would be a surprise if the Bills didn’t move up for a quarterback to pair with their young head coach and defense. Josh Rosen is a polarizing personality, but if Sean McDermott believes in his ability to lead the offense, that’s all that really matters.

On the field, Williams probably had the best weekend out of all the offensive linemen at the Combine, and he could be considered the clear top player at his position by the end of April. The Bengals could turn things around quickly if they can get some better line play.

There are plenty of needs all over Washington’s roster, but they aren’t going to sit around after trading for Alex Smith in January, especially with their offensive line still being among the best in football. Christian Kirk would bring some needed consistency and explosion to the receiving core.

This could wind up being a steal if Derwin James is available here, and I wouldn’t be surprised if some teams have him higher on their boards than Minkah Fitzpatrick. Perhaps they will re-sign Morgan Burnett, but it would be really fun to see James and Ha Ha Clinton-Dix paired up on the back end.

While the Combine was stacked with tremendous athletes, there might not have been a more impressive player over the past four days than Jaire Alexander when you consider the athletic testing and on-field drills. The Cardinals would finally solve their problems opposite Patrick Peterson with this pick.

Moore jumping all the way to the first half of Day 1 would certainly be a climb, but did anyone think we would have three receivers selected in the first nine picks last year? The Ravens are likely going to reshape their wide receiver room, and D.J. Moore is a good start.

Vita Vea and Da’Ron Payne could go either way, but I liked the slimmed-down version of Payne that was on the field in Indy this week. He would be dynamic fit between Joey Bosa and Melvin Ingram on the Chargers front.

Jackson didn’t look very comfortable today in the Combine drills, but it’s important to not overreact, especially when the college film and production are both strong. He would be an ideal replacement for Richard Sherman across from second-year corner Shaquill Griffin in both the future and in 2018 if Sherman is traded.

The Cowboys already have Sean Lee and Jaylon Smith, but both have durability/injury concerns, and we’ve seen how the defense plays when Lee in particular is out. Tremaine Edmunds doesn’t turn 20 until next month, and he would be able to learn from Lee and hopefully have a limited role as he develops.

I had the Lions getting Payne in my first mock, and here they get Vea instead. Matt Patricia would love that Vea is scheme-versatile and probably won’t have to leave the field on passing downs.

The Dolphins would need both of Buffalo’s first-round picks this year to move down from 11th overall, and they are also expected to get a decent pick for Jarvis Landry. That would allow Adam Gase to retool his roster around guys that will buy in, and the physical Guice is a great compliment to Kenyan Drake here.

I think Miami would be thrilled about moving back and getting this haul, as Isaiah Wynn being paired with Laremy Tunsil on the left side of the line could be an elite duo for the next decade.

The Rams probably won’t go after a cornerback after trading for Marcus Peters, but they need to acquire at least one pass rusher this offseason for Wade Phillips’ defense. Carter ran a 4.50 40-yard dash in a six-foot-six frame, and he has colossal upside as a 3-4 outside linebacker.

Davenport also had a strong performance at the Combine with an impressive 4.58 run and 124-inch broad jump, and his raw ability on the edge of Carolina’s defense could be scary if he gets the most of it. The Panthers could also get wideout James Washington here.

Tennessee’s roster is pretty strong as it currently stands, and the new-look offense under head coach Mike Vrabel’s staff could make them a force in the AFC. I think Vrabel could want a hand-picked middle linebacker to lead his defense, which comes in the form of Rashaan Evans here.

I could see most of these 2017 playoff teams moving down into the second round if the right offer presents itself, but Atlanta could also bolster their offensive line with a bully of a guard to open some holes in the running game. Devonta Freeman would approve.

Depending on what happens in free agency and the draft, New Orleans might choose to move on from Max Unger in his age-31 season. If James Daniels is still on the board here, that decision could be a lot easier, though the Iowa product could also play guard.

This is just a gut feeling, but the Steelers might want to take Ben Roethlisberger’s successor after some retirement talk over the past couple years. Lamar Jackson needs to improve as a passer, but he could be unleashed as soon as 2019.

Jacksonville might be hoping Jackson falls all the way to them, but they seem content with Blake Bortles as their franchise quarterback after he led them to the AFC Championship Game. Gesicki would give Bortles a huge target that could either pair with fellow Penn State alum Allen Robinson or replace him as an elite red-zone threat.

Quarterback might be in play depending on what happens in free agency, but Minnesota could also use a left tackle of the future. Mike McGlinchey has played both tackle spots, so starting on the right side in 2018 would bolster the unit.

Chubb will probably get drafted here by New England and turn into a perennial 1,500-yard, double-digit-touchdown threat. Defense is the bigger area of need, but we’ll see if that’s repaired some in a couple weeks.

There are several worthy selections for Philadelphia with the final pick on Day 1, and they are also a prime spot to trade down for those that want to jump Cleveland as the first pick on Day 2. However, Donte Jackson could be their guy to stick in the slot with Ronald Darby, Sidney Jones, and Jalen Mills all working outside.