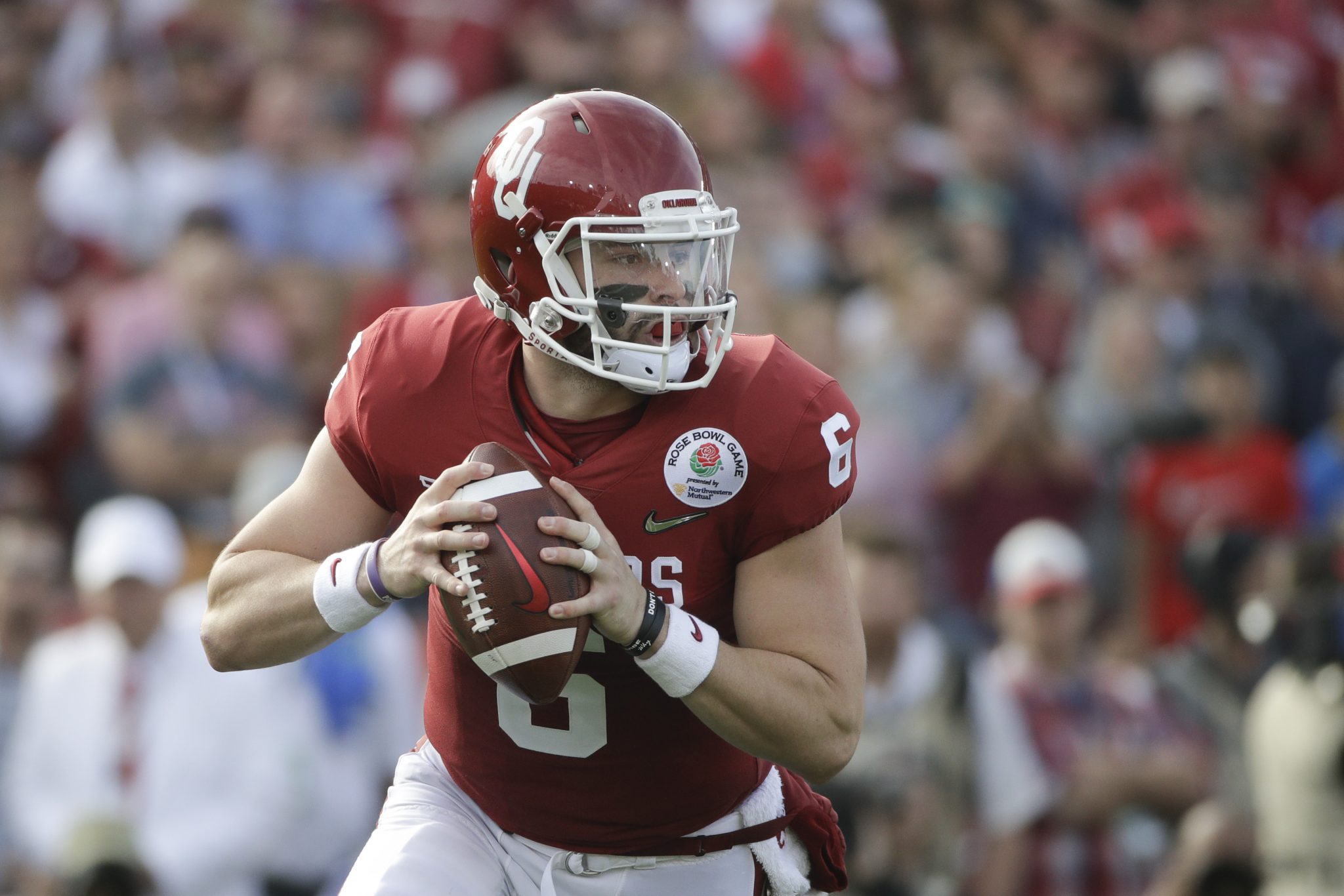 
The first wave of NFL free agency is finished, and the NFL landscape has changed a lot over the past week. Not only have quarterbacks like Kirk Cousins signed, but there was also a big trade between the Jets and Colts that puts New York in position to draft a quarterback next month. There are still more signings, trades, and more changes to come, but here is how I see the 2018 NFL Draft going at this point.

Mock drafts will be a lot easier if the Browns reveal who they are taking before April 26th, but the position seems to be quarterback after they signed Carlos Hyde and had the Jets move up ahead of Cleveland’s fourth-overall pick to undoubtedly take a signal-caller. I would say it’s a two-man race between Sam Darnold and Josh Allen if Saquon Barkley isn’t an option.

Buffalo is in a precarious position following New York’s move up to third overall, as the Giants could basically hold them hostage if they want to get ahead of their division rival. However, the Bills already have a playoff roster in place, so the franchise should do whatever it takes to move up if the quarterback they want is available here. Allen seems like an ideal fit for western New York.

The Jets made a bold move on Saturday morning when they traded three second-round picks to move up three spots and set themselves up to take one of the top passers in this year’s class, so they must have high grades on multiple quarterbacks (or they’re prepared to move up again). I’m not sold on Mayfield, but he could provide excitement at the position that hasn’t been around since Joe Namath.

I would say getting the quarterback they want with the first pick and still having Saquon Barkley fall to them at fourth overall is a best-case scenario for John Dorsey and the Browns. Carlos Hyde is a good back, but he wouldn’t preclude the franchise from taking a generational talent here. That’s what Barkley is.

This could be Josh Rosen, but I think the Broncos are going to roll with Case Keenum for a couple years and hope that Paxton Lynch or Chad Kelly is able to develop behind him. Minkah Fitzpatrick is a culture-changing talent and another potential superstar on Denver’s defense.

Indianapolis probably had an easy decision to move back knowing that at least one of Saquon Barkley, Bradley Chubb, and Quenton Nelson would be available here. In this scenario, I think they’d opt for Chubb with more running backs and offensive linemen available on Day 2.

Tampa Bay might be the biggest winner of the Jets trade on Saturday, with a blue-chip talent set to fall to them if three quarterbacks go in the top five. Quenton Nelson would instantly boost the entire offensive line and allow the offense to be more balanced to set up play-action passes for Jameis Winston.

New head coach Matt Nagy should be thrilled with what GM Ryan Pace has accomplished so far this offseason, as Allen Robinson, Trey Burton, and Taylor Gabriel were all excellent additions to the offense. Defensively, Chicago is already underrated, and Roquan Smith could be the missing piece to creating a dominant unit.

San Francisco made an early splash in free agency by signing Richard Sherman after his release, so that could make this less of a fit, as Denzel Ward isn’t a cover-3 corner like Sherman. However, Ward has the length and anticipation skills to stay outside on early downs and could kick inside against three-wide sets.

Jon Gruden wasted no time plugging holes on his roster in free agency, and they suddenly have a very talented defense (on paper, at least) to compliment Derek Carr and the offense. Vita Vea has the versatility to play alongside Justin Ellis on the interior of Paul Guenther’s defense with Khalil Mack and Bruce Irvin (who is making the switch to a full-time defensive end) bookending them.

I would be surprised if Rosen went first or second overall if the Browns and Bills picked there, but there’s definitely a chance the Jets are targeting him with their pick. If not, though, he could slide out of the top ten—despite being labeled the most pro-ready passer in the class—giving Adam Gase an opportunity to upgrade on Ryan Tannehill if he sees this as such.

Fans of the Giants might not be too excited if they were to pass up on an elite player at the top of the draft to trade down, but Isaiah Wynn could turn into an All-Pro guard just like Quenton Nelson, and the Georgia product is probably a better pass protector for Eli Manning anyway.

Washington tried moving Josh Norman around more last season without much success, so they might attempt to change things up and get a man-to-man corner like Jaire Alexander here. However, they could also double-down on the long, rangy boundary corner and take Josh Jackson to create a playmaking duo with Norman on the outside.

I could see Derwin James going a lot higher than this or actually falling due to team needs, but even with Ha Ha Clinton-Dix and Josh Jones on the roster, James could be too good a player and locker-room presence to pass on for the Packers here. Tremaine Edmunds is also an option.

Arizona has been pegged as a team that might move up for a quarterback, but I don’t see them playing for the future in Larry Fitzgerald’s final season. The more likely scenario is pairing Jaire Alexander with Patrick Peterson, which could instantly become the best cornerback duo in a conference loaded with great passing attacks.

Could a tight end go higher than O.J. Howard did last year? Howard was a better all-around player coming out, but Baltimore needs weapons for Joe Flacco, and Gescicki is clearly the top receiving option at the position in this class. He and Michael Crabtree on the field together would really give the red-zone offense a boost.

The Chargers need help at both offensive and defensive tackle more than any position, but they can hope Philip Rivers is able to continue getting the ball out quickly, and instead opt for Da’Ron Payne to anchor their defensive line with this pick. Payne should fix the run defense and create a really scary front.

Pete Carroll’s squad is seriously re-tooling this offseason, but they need to be considered championship contenders as long as Russell Wilson is under center. I like how Ridley’s skillset matches up with the magician-like quarterback, and Seattle needs weapons all over on offense.

Dallas would probably like Ridley to fall to them as a compliment for Dez Bryant, but they should also be thrilled by Tremaine Edmunds still being available. Edmunds doesn’t turn 20 until after the draft and is a high-character, uber-talented linebacker prospect.

Matt Patricia’s defense has to get a lineman at some point in the draft, and if Hurst is cleared by a health standpoint, he will be worth a pick on Day 1. Detroit would have some legitimate star power for Patricia with Hurst, Jarrad Davis, and Darius Slay.

Despite trading back, I wouldn’t sleep on quarterback here for Cincinnati (Lamar Jackson, in particular), but they could also get who I had them taking in my last mock with Connor Williams will on the board. The Texas product could start immediately on the right side.

The thinking for New York when deciding whether or not to trade out at second overall should be whether they’d rather have Barkley/Nelson there or—in this case at least—Wynn, Guice, and at least three second-round picks and perhaps another future first-round pick. I think they’d take the latter.

Los Angeles is basically missing just a pass rusher on their re-shaped defense with Marcus Peters and Aqib Talib on the outside, and Lorenzo Carter has great upside in his six-foot-six frame. Carter should get more and more first-round buzz as we get closer to the draft.

Carolina has a few needs to address, but getting an elite receiver would solve more than one thing by allowing Devin Funchess to slide back into a high-end secondary role and Curtis Samuel to stay in the slot. A core with those three, Christian McCaffrey, and Greg Olsen would be the best in Cam Newton’s career.

Tennessee could be a real threat to New England in the AFC as soon as this season under Mike Vrabel. Not only did they sign Dion Lewis and Malcolm Butler, but they also re-signed DaQuan Jones and Josh Kline. I think the only think Vrabel is missing is a captain for his defense, and that could be Rashaan Evans.

Devonta Freeman and Tevin Coleman would love this pick because Will Hernandez is a bully that would open holes for them in the running game. Atlanta wants tough players that love football, and that’s exactly what Hernandez is.

Christian Kirk could be the pick here to create a really, really explosive offense, but James Daniels is a long-term option at center that could play guard if the Saints want him to early in his career.

Like I said in my last mock, this is just a gut feeling, but Jackson seems like a good fit for the Steel City. It’s unclear if Big Ben really wants to play a few more years, but Jackson would be a great succession plan if he’s available at the end of the first round.

Jermey Parnell was solid for the Jaguars in 2017, but he turns 32 in July and doesn’t have the upside that Mike McGlinchey does. The Notre Dame product could be an excellent bookend with Cam Robinson for the next decade with Leonard Fournette running behind them.

Okorafor isn’t a plug-and-play prospect because he’s still raw, but Minnesota already has a loaded roster in place after signing Kirk Cousins and Sheldon Richardson so far this offseason, so they could afford to make a future pick. Chukwuma could be their left tackle of the future.

We won’t know which direction Bill Belichick will go here until the selection is actually made, but it might be more likely than not that New England trades the pick. Still, despite re-signing Rex Burkhead and signing Jeremy Hill, the Pats could have Nick Chubb too high on their board to pass on here.

Philadelphia could also address a few different areas with the final pick of Day 1, but Christian Kirk could wind up being an absolute steal if he falls. The former Texas A&M star has experience outside, in the slot, and as a returner.