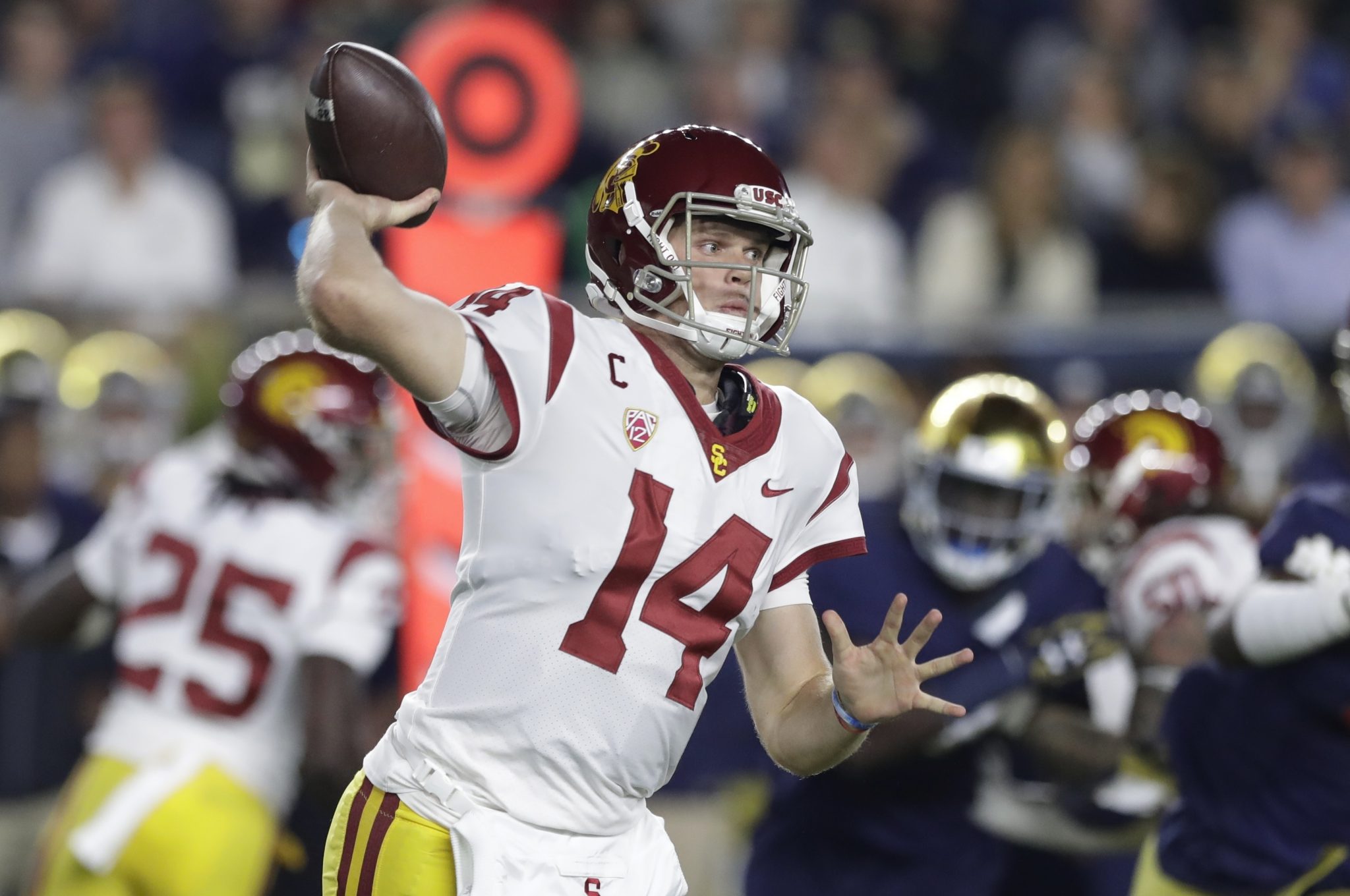 
Shockwaves were sent through the NFL yesterday when the Patriots traded wide receiver Brandin Cooks and a fourth-round pick to the Saints for the 23rdoverall pick and a sixth-round pick, and the move really changes what could happen over the next few weeks, as New England now has two first-round picks and two second-round picks to play with. Some have speculated they will move up for a quarterback or trade two firsts for Odell Beckham Jr., and here’s what I think might happen in my first three-round mock draft.

I’ve been back-and-forth on the first-overall pick, but I think the overwhelming belief that Sam Darnold is the guy has been wrong. It’s possible Cleveland is able to convince the Giants to move up one spot to assure they get Darnold, so that’s something to watch.

At this point, it would be a surprise if this pick were anything other than Darnold or Allen—whether it’s New York taking their future quarterback or trading out for someone else to take whoever Cleveland doesn’t.

Is it possible that the Jets traded up with one of the top-two quarterbacks in mind, and have someone else (like Saquon Barkley) as a backup plan? I wouldn’t be completely shocked, but they probably didn’t give up three second-round picks to not take a signal-caller. Baker Mayfield fits the system.

This is a best-case scenario for the Browns in my opinion, as they get their quarterback target with the first pick and still have Barkley on the board here.

Things will get interesting if the draft plays out like predicted to this point, as Denver could either take Josh Rosen or Lamar Jackson, trade down for someone to take one of them, or simply take the best player available. I don’t think GM John Elway will pass up a chance at Quenton Nelson without a Godfather offer.

The Colts get a guy they might have taken with the third-overall pick while getting some tremendous values on Day 2 of the draft.

If no one trades up like I’m predicting here, then Josh Rosen and undoubtedly gong to fall outside the top ten. But Adam Gase might fall in love with Rosen’s accuracy all over the field and trade up to ensure he gets him.

Roquan Smith is the perfect Chicago linebacker. He could be the final piece to building a dominant defense that would make the ’85 Bears proud.

GM John Lynch would be ecstatic if four quarterbacks went in the top-seven picks, as a blue-chip talent would be available here. Minkah Fitzpatrick is as versatile and intelligent as it gets on the back-end of a defense.

The Raiders plugged a bunch of holes in free agency, but cornerback is still a question mark. Denzel Ward would push former college teammate Gareon Conley for a starting job and would at worst be a shutdown slot man.

A dream scenario for the Bucs would be Saquon Barkley falling to them, but if that doesn’t happen, I think they are a prime candidate to trade back. Derwin James would bring a fear factor to the secondary.

Buffalo is in Josh-Allen-or-bust mode in my opinion, so if they aren’t able to get the Wyoming gunslinger, a trade back to acquire more picks is possible. The Chargers have shown a ton of interest in Lamar Jackson this offseason, and he’d be an exciting successor to Philip Rivers.

The Redskins need a cornerback to pair with Josh Norman, and Jaire Alexander is a playmaker that can play man or zone. He also could boost the return game for Washington.

The draft range for Mike Hughes is pretty wide, but all it would take is one team to go early like he does here. Green Bay needs a true number-one cornerback.

A healthy Sam Bradford would be deadly in an offense that includes Larry Fitzgerald, David Johnson, and Christian Kirk.

Baltimore improved their receiving core in free agency with Michael Crabtree and John Brown, but the former turns 31 in September, and the latter has had various injury issues. Calvin Ridley would be a steady presence for Joe Flacco.

Sean McDermott’s defense was championship caliber in 2017, but they could use help at linebacker; Tremaine Edmunds is a freaky athlete that should grow into one of the game’s best.

This is one of the best fits in the draft, as Jackson profiles as a ball-hawking perimeter cornerback that could seamlessly replace Richard Sherman in the new-look Legion of Boom.

I think Dallas would take Calvin Ridley if he’s available, but if not, they could go with the best player available to sure up the defensive line with Vita Vea.

Matt Patricia would likely be thrilled with the versatile Da’Ron Payne as his first pick as head coach of the Lions. He and GM Bob Quinn—both from the Patriots—will be on the same page.

Cincinnati already bolstered the offensive line with new left tackle Cordy Glenn, and they could also come away with an elite guard prospect later this month.

Last year’s Bills defense with Tremaine Edmunds and Rashaan Evans in the middle is a scary thought. I don’t think this would be overkill.

I think New England might have traded Brandin Cooks with Mike Gesicki in mind here. He’s the perfect compliment to Rob Gronkowski as a move tight end that will be a mismatch nightmare.

Carolina has a handful of needs, and a talented edge rusher is towards the top of the list. Marcus Davenport has to improve his technique, but all the tools are there.

I’ve had the Titans drafting Rashaan Evans here to lead Mike Vrabel’s defense, but if he’s off the board, they could turn their sights to Malik Jefferson; he can make plays all over the field.

Atlanta could really use Will Hernandez to open more holes for Devonta Freeman and Tevin Coleman in the running game.

With Max Unger declining, New Orleans needs to think about a succession plan. James Daniels can easily slide in at guard for a year before taking over as the anchor on the offensive line.

Unless Ben Roethlisberger has told the team he was just being dramatic with retirement talk last year, they should start looking ahead for a franchise signal-caller. Mason Rudolph would really benefit from sitting behind a two-time Super Bowl champion as he adjusts to the NFL.

The offensive tackles could wind up going much higher than this, but a few teams already have bookends in place. Jacksonville would have that with Connor Williams and 2017 second-round pick Cam Robinson.

Minnesota is loaded after signing Kirk Cousins and Sheldon Richardson without losing any big-time contributors, so they can continue to improve the offensive line with Mike McGlinchey.

Perhaps the Steelers took their quarterback target in Mason Rudolph here, but the Patriots need a left tackle after Nate Soldier left in free agency. Kolton Miller is an ideal replacement.

D.J. Moore is a dangerous playmaker with the ball in his hands, and he could work inside and outside in tandem with Nelson Agholor and Alshon Jeffery on an already-stacked offense.