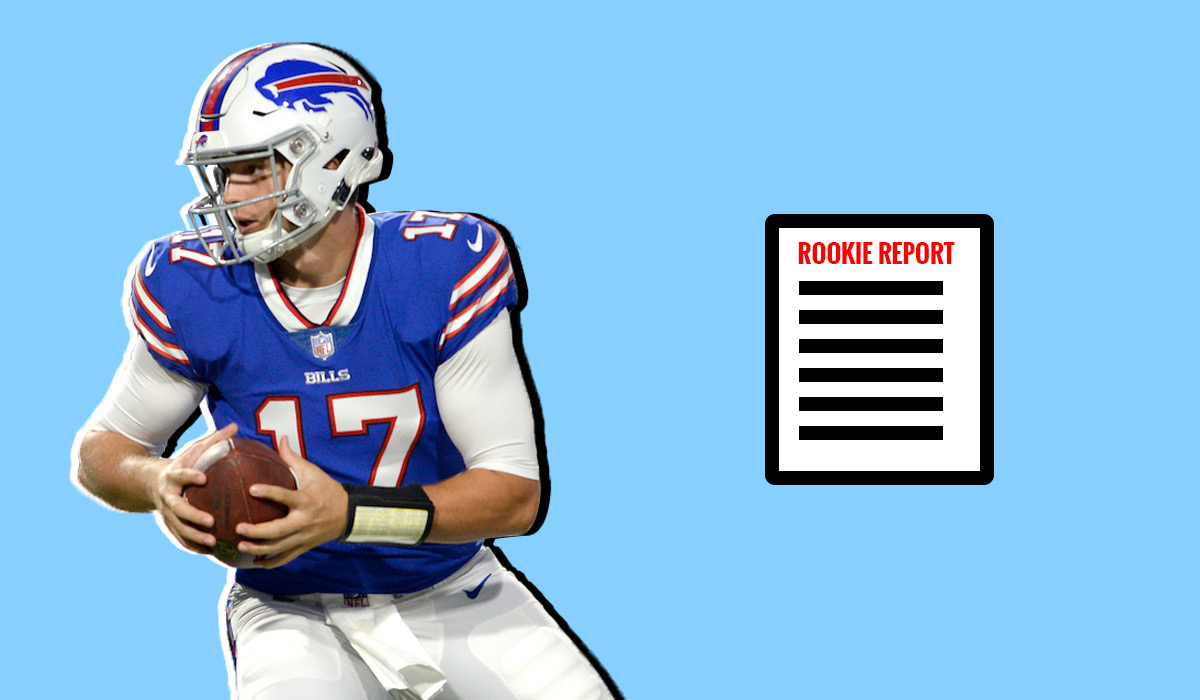 
A couple injuries have impacted the rookies I’ve been highlighting, but it’s time to check in on everyone ahead of this weekend’s games. [Note: the ranking from my final 2018 Big Board is listed in parenthesis]

Buffalo was in another defensive battle last week, and Josh Allen took care of the ball before leaving the game due to an elbow injury down 10-6 on the road. Unfortunately, backup Nathan Peterman followed up a touchdown pass off the bench with two interceptions (including a pick-six) in the final two minutes as the Bills fell, 20-13, but I think Allen would have been able to orchestrate a game-winning drive—or at least sent the game to overtime—for the second-straight week based on the poise he showed against the Titans. The No. 7 overall pick is week-to-week, so he’ll look to get back on the field sooner rather than later and continue developing. Allen deserves credit for playing well enough to go 2-2 in games he’s started and finished after he was called a bust before even stepping on an NFL field.

He’s coming off his second missed game in a row, but Jaire Alexander should be able to get healthy over the bye week before matchups against two high-powered offenses (Rams and Patriots) on the road.

Some evaluators were worried about Christian Kirk transitioning to the outside at the next level, but he’s been a clear standout performer there on the league’s worst offense. The Texas A&M product has gone for at least 77 yards in three of the past four games, and his big-play ability has been on display with a grab of 30+ yards in each of those successful outings. Also, even if the offensive system isn’t advantageous for the rookie, at least Larry Fitzgerald is there to mentor him, and Kirk could really take off in 2019 when he’s expected to get more action in the slot.

It looks like Miami’s second-round pick has fallen behind Nick O’Leary on the depth chart, as Gesicki (35%) was out-snapped by the veteran (67%) once again, showing Week 5 wasn’t an an anomaly. The fact that Gesicki has turned four of his nine receptions into a first down should be seen as a positive, but he might not be a significant contributor until later in the season or perhaps next year. Still, I’d like to Adam Gase take advantage of his size in scoring territory for an offense that ranks seventh-worst in terms of red-zone touchdown percentage this season.

Detroit sits at 2-3 in a competitive NFC North, and they would be wise to feature Kerryon Johnson coming out of the bye. The Auburn product is fifth in the league in yards per carry (5.7), and he should also be used more as a receiver this weekend against the Dolphins with Theo Riddick (knee) looking doubtful to play.

The Packers continue using Josh Jackson as their clear No. 3 cornerback with Jaire Alexander inactive, but he was down to 37% of the snaps played on Monday night. It doesn’t seem to be close to happening considering left corner Kevin King played 100% of the snaps in Week 6 (and actually played well), but I think the best starting trio for Green Bay would be Jackson and Tramon Williams on the outside with Alexander in the slot. The biggest issue for Jackson right now is avoiding penalties (he leads the team with five for 60 yards), but the hold called on him last week away from the play was a little cheap, and his aggressiveness will allow him to make more plays if given a stable role. The Packers have a bye this week, so we’ll see how playing time is allocated in Week 8.

Hue Jackson claimed again after Cleveland’s blowout loss to the Chargers that Nick Chubb will get more work moving forward, but I’ll believe it when I see it. Honestly, if the coaching staff wants to feature Carlos Hyde, they should at least think about using some dual-back sets to keep the defense guessing and get Chubb the ball in space as an underrated receiver that will easily shed arm tackles at the second level. I would be shocked if the former Georgia star finishes 2018 with the 43 touches that he’s on pace for, but you can never really discount anything when it comes to the Browns.

A blowout loss against the Eagles with limited opportunities to get after the passer led to just 22 snaps for Lorenzo Carter in Week 6, but maybe a potential shootout in Atlanta on Monday night will allow him to get after Matt Ryan. As I said last week, Carter needs to develop before he unlocks his potential, but unlike some of the rookies on this list, I’m at least confident in the coaching staff in place. New York desperately needs someone to step up and make a big play, and Carter will have his chance in another primetime game.

Anthony Miller only missed one week with a shoulder injury, and he returned last week to play 59% of the team’s offensive snaps while catching the go-ahead touchdown before Miami won it in overtime. Statistically, the biggest thing working against the Memphis product is Mitchell Trubisky’s willingness to spread the ball around, but it will take a complete offensive effort to outscore Tom Brady and the Patriots this weekend, and Miller could see some favorable coverage if New England makes sure Allen Robinson, Jordan Howard, and Tarik Cohen don’t beat them through the air or on the ground. Despite his smaller stature, look for Miller to make some downfield plays in one-on-one matchups.