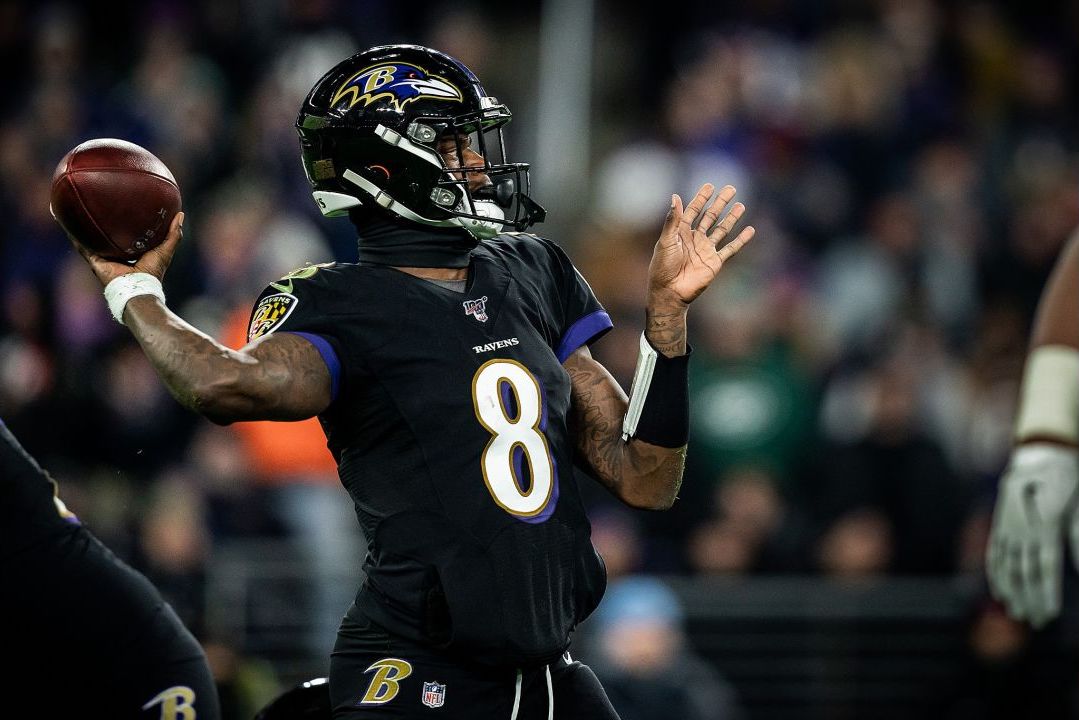 
The NFL Honors award ceremony is tomorrow night on the eve of Super Bowl LIV, and there are a bunch of candidates that should be in the mix for nearly every award. Let’s start with the obvious 2019 NFL MVP choice: Ravens quarterback Lamar Jackson.

The magician-like Russell Wilson is expected to get maybe a few votes for league MVP, but Lamar Jackson should run away with the award after a sensational second season in the NFL. The Heisman Trophy winning quarterback threw for 3,127 yards and 36 touchdowns with just six interceptions, while adding 1,206 rushing yards and seven rushing touchdowns for the Ravens. Jackson obliterated Michael Vick’s single-season rushing record for a quarterback, and he also led the NFL in both passing touchdowns and yards per carry (6.9), and he did it in just 15 starts (he sat Week 17) while keying Baltimore’s 14-2 record and top seed in the AFC. Jackson did benefit from an excellent offensive line and potent inside rushing attack, but he put passes right on the money to a revamped skill position group that did not have a lot of experience together and lacked an elite No. 1 option.

Jackson is also an easy choice for Offensive Player of the Year, despite league-leading rusher Derrick Henry’s late-season run to help the Titans get into the postseason. The statistical production of the 22-year-old basically accounted for top-level success of both a quarterback and running back.

A few edge players that put up huge numbers are in the discussion, but Defensive Player of the Year should come down to a couple of cornerbacks on playoff teams in my opinion: Stephon Gilmore and Tre’Davious White. Gilmore was the favorite for much of the season, but he had some struggles in December, including in a Week 17 loss to the Dolphins that cost the Patriots a first-round bye. Meanwhile, White did not allow a touchdown all year, and he also made gamechanging plays late in the season—if White played for a big-market team, he would be getting a lot more publicity than he does in Buffalo. I would be surprised if White wins, but I believe the Bills’ All-Pro deserves it.

Miles Sanders stepped up for the Eagles when Jordan Howard missed a chunk of the season with a shoulder injury, but I think Offensive Rookie of the Year should be between Josh Jacobs and A.J. Brown. If Jacobs did not miss time because of his shoulder issue (and injury he showed great toughness playing through earlier in the season), he likely would have been the choice. But the emergence of Brown in Tennessee lifted the Titans’ passing game, and the Ole Miss product was an immediate big-play maven in his first professional season. Brown totaled 1,111 yards and nine touchdowns on just 53 touches while averaging 20.2 yards per receptions and an absurd 12.5 yards per target. Brown’s rookie year was simply stupid good, and he is the clear choice despite a solid year for the 2019 draft class on offense.

Defensive Rookie of the Year came down to three defensive ends: Nick Bosa, Josh Allen, and Maxx Crosby. The winner will likely be Bosa because he was the No. 2 pick in the draft and plays for a notable West Coast team that was the top seed in the NFC, but I think Allen should be the selection for the honor. Bosa had more help around him on a stacked 49ers defense, and he received more consistent playing time than Allen; but the Jacksonville rookie still recorded 1.5 more sacks (10.5) and consistently made an impact in the backfield all season.

This is one of the most difficult awards to select this year, and two playoff quarterbacks (Jimmy Garoppolo and Ryan Tannehill) are worthy choices. I’ll give the nod to Cooper Kupp, who came off a torn ACL and started the season on-fire for the Rams. The third-year receiver slowed a bit toward the end of the year, but he picked it back up with five consecutive games with a touchdown to conclude his comeback season. Kupp had 94 receptions for 1,161 yards and ten touchdowns overall in 2019.

Mike Tomlin looked like he would be the easy choice for much of the season, and he still deserves consideration despite Pittsburgh falling short of a playoff berth. Kyle Shanahan, Sean McDermott, and Brian Flores (no one outside of the building thought the Dolphins would win five games) could also pick up some votes. However, John Harbaugh pushed all the right buttons with his team during the regular season, and he oversaw a team that allowed likely NFL MVP Lamar Jackson to run wild in a college-style offense.