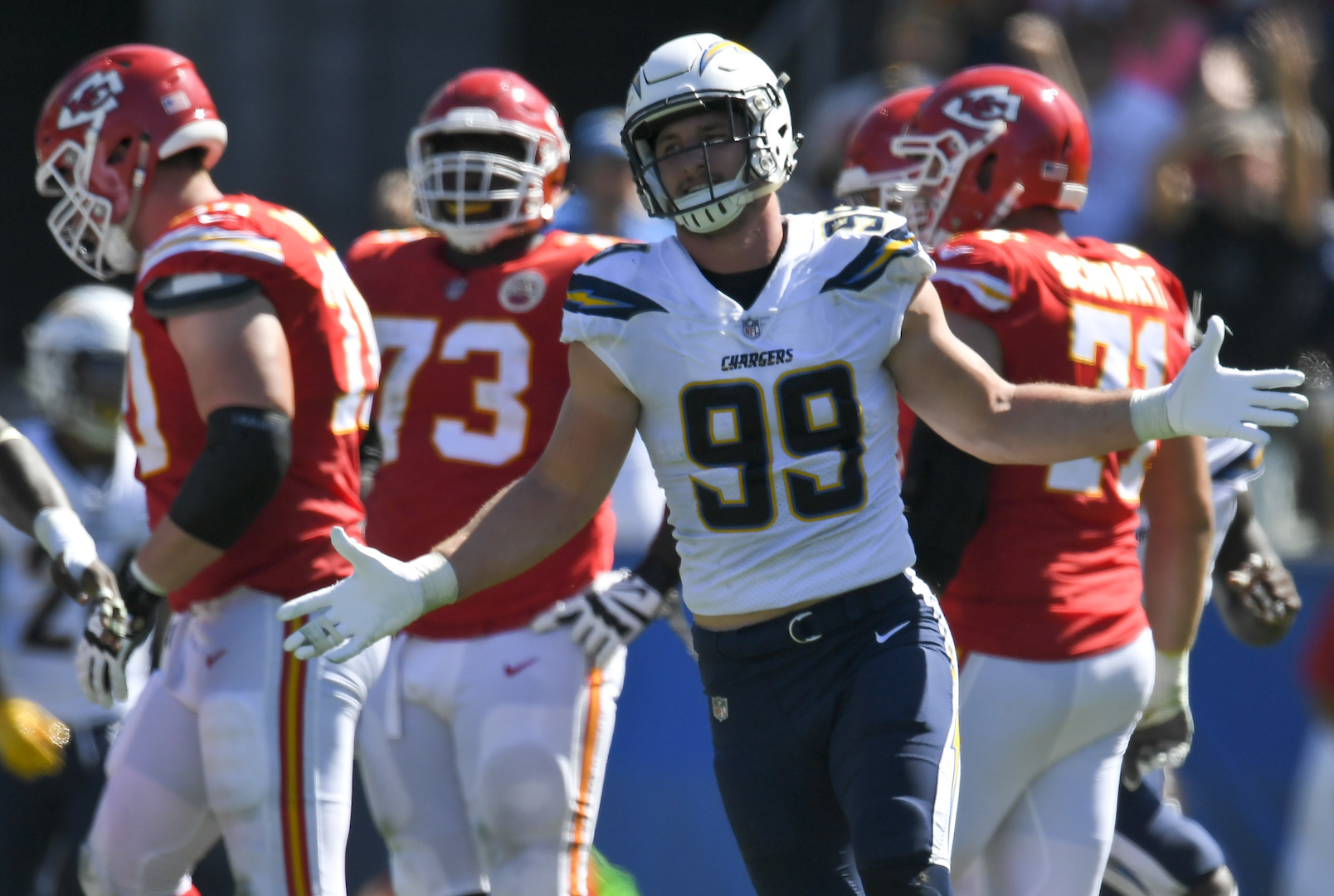 
Making the playoffs isn’t easy in the NFL, and winning a division is obviously even more difficult. While the best approach for NFL teams to take is going one week at a time, many teams have the goal of winning their division before the season. As usual, this year will be filled with teams surpassing expectations while others falter, and we’re still several weeks away from the regular season, but this is where I rank the divisions as the 2019 season approaches. In case you missed them, you can also check out my pre-training-camp team power rankings here.

The Chiefs and Chargers battled for the AFC’s top seed in 2018, and they both have an argument for the conference favorite heading into this season. Among top-two teams within one division, Kansas City and Los Angeles are probably a good bet to have the best record among any other top-two pairing in any other division again this year. Then behind them, the Raiders made moves to improve the roster and put it on a level that’ll make it more likely that they can compete for a division title, and quarterback Derek Carr is entering his second season in Jon Gruden’s offense while adding superb weapons in All-Pro receiver Antonio Brown, receiver Tyrell Williams, running back Josh Jacobs, and right tackle Trent Brown. In Denver, new head coach Vic Fangio will look to get an instant turnaround while making his defense tougher and more consistent than it’s been the last couple of seasons, and he has former Super Bowl MVP Joe Flacco at quarterback leading the Broncos offense.

Bottom line: The AFC West has two top-notch teams, but all four squads have the ability to make a playoff push or at least hover around the .500 mark.

Entering last season, I thought the NFC South was the best division in football, but they had just one playoff team (the Saints). However, the Falcons will hopefully stay much healthier in 2019, and the Panthers will have Cam Newton at 100% after his shoulder issue last season—also, both teams have recently been to the Super Bowl, and they are both led by former league MVPs at quarterback. I am concerned about Jameis Winston at quarterback for the Buccaneers, but new head coach Bruce Arians (a former two-time Coach of the Year) might be able to help limit the turnovers, and there’s a stacked supporting cast to work with. The NFC South just had three playoff teams in 2017, and the division probably offers the best chance for a team to grab two wild-card spots again this season.

Two seasons ago, the Jaguars boasted an elite defense that had them on the cusp of a Super Bowl appearance, and they’re now arguably the fourth-best team in the AFC South; that speaks to the depth of the division, which appears to be a four-way toss-up heading into the season. The Colts have Andrew Luck at quarterback leading a group that fits together well and plays extremely hard, but they were only a wild-card team in 2018. The Texans have star power with Deshaun Watson, DeAndre Hopkins, J.J. Watt, and Jadeveon Clowney, and they just won the division last season. And the Titans were just a game from the postseason last year, and they are entering their second season under head coach Mike Vrabel. If all four starting quarterbacks stay healthy, the AFC South should be a lot of fun for all 16 games.

Bottom line: The AFC South is probably the deepest in the league, and all four teams have the potential to be in the mix for a first-round bye in the AFC.

Let’s start with the Cardinals, who I don’t see being in the mix for the NFC West title this season. They should be much better than their three-win campaign last year, though, and the Arizona offense could present some challenges with Kyler Murray operating Kliff Kingsbury’s air raid system. However, the other three NFC West teams are the strength of the division. The Rams should remain one of the NFL’s best teams assuming they avoid a Super Bowl hangover, and they’ll have the confidence to beat anyone after winning in the Superdome in the NFC Championship Game last season. Seattle is always competitive and should never be counted out of making a run for first-place in their division, no matter how strong Los Angeles’ roster is. But the NFC West has a chance to be one of the best one or two divisions in the NFL if the 49ers—one of the biggest question marks in the league this season—finally get back to being contenders. San Francisco has the roster and the quarterback in Jimmy Garoppolo to make noise.

Bottom line: This will likely be a three-team race at best, but the Rams, Seahawks, and Niners all have the talent and quarterbacks to represent the NFC in the Super Bowl.

Initially, I was thinking the NFC North would be up at the No. 2 (or potentially No. 1) spot among the NFL’s top divisions for 2019—and they could certainly be up there—but they’re down at No. 5 after the Bears were the only team to finish above 9-7 last year. These division power rankings are projecting for this season, but will the Packers immediately be a lot better under a first-year head coach? Will changes at offensive coordinator help the consistency of the offenses of Minnesota and Detroit? We’ll see, but there are enough questions not to put the NFC North atop the best divisions list. That said, the upside of the Bears and Vikings in particular is massive, as they both could have dominant defenses, and they have playmakers on offense to rank among the league’s best.

Bottom line: There shouldn’t be any teams near the bottom of the league in terms of record from the NFC North this season, but we’ll see if the three teams behind the Bears can get out of the 6-to-8-win range.

The NFC East might be higher on the list if the Redskins weren’t likely to start a rookie quarterback that didn’t have a ton of experience at Ohio State, as Washington’s roster is much stronger than people think. Also, the Giants might surprise people heading into Pat Shurmur’s second year leading the franchise after they played relatively well down the stretch without Odell Beckham Jr. (since traded to Cleveland) in 2018. However, the division might be a two-team race between the Eagles and Cowboys, with wild-card berths seeming more likely for the Giants and Redskins. Dallas has been consistent with Dak Prescott under-center, going 13-3, 9-7, and 10-6 since drafting him in the fourth round of the 2016 draft. Meanwhile, Philadelphia added a bunch of pieces on offense, and quarterback Carson Wentz must be determined as ever coming off two consecutive seasons ended by injury.

Bottom line: If the quarterback situations for Washington and New York work out, the NFC East could again be one of the best divisions in football.

Things could change in the preseason (injuries, etc.), but for the first time, the Browns are the AFC North favorites (according to the oddsmakers) heading into the season right now. Cleveland does have the talent to win the division for the first time ever (since the AFC Central became the AFC North in 2002), but projecting them as one of the top teams in the AFC might be a little aggressive. The Steelers should have a very solid defense that could be a top-five unit if the secondary plays well to complement the stout front-seven, and Ben Roethlisberger at quarterback should make the departure of Antonio Brown easier to get over—they should be the division favorites in my opinion, but I’m not sure about their upside. Baltimore is always tough on defense, and the run-heavy offense with the dynamic Lamar Jackson at quarterback could be something that gives opposing defenses trouble for a time. There would be more optimism about the Bengals if not for the loss of first-round offensive tackle Jonah Williams (shoulder surgery) and guard Clint Boling (retirement) causing concern for the offensive line.

Bottom line: With the Browns on the rise, the Steelers-and-Ravens-dominant AFC North should be more competitive moving forward, but the Bengals might struggle in 2019 if the offensive line doesn’t hold up.

The Patriots have won ten straight division titles and all but two since 2001, and the main reason is because of the greatness of the team led by Bill Belichick and Tom Brady; but teams within the division haven’t been able to consistently provide a challenge that lasts for years. The Jets and Dolphins are both on new head coaches again (Adam Gase, who was just with Miami, for the Jets; Brian Flores, who comes from New England, for the Dolphins), and Miami is expected to be the worst team in the league in 2019. The Bills made the playoffs in 2017 and offer immense upside in Sean McDermott’s third season at the helm, but a wild-card berth is still probably more likely than a division title and a first-round bye. This is the only division where, barring injury, the favorite is nearly a lock to come in first place. And while I personally like Gase and think he gets a bad rap from the media, I think the Jets might need more improvements on the roster to make a serious playoff push.

Bottom line: The AFC East will likely go to the Patriots again, but the Bills could be right there in the mix, while the Jets might not be ready yet and the Dolphins contending would be stunning.