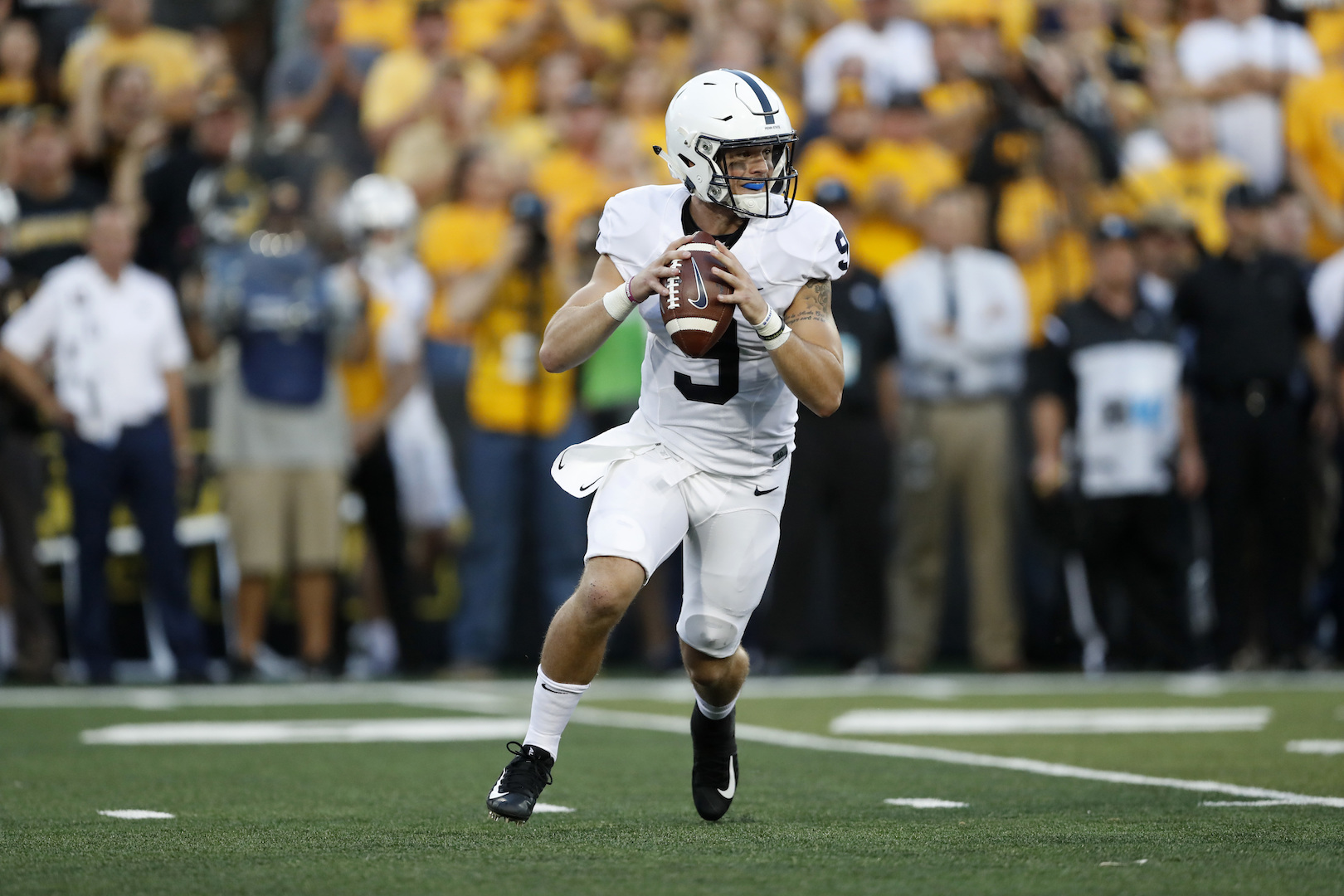 
The pre-draft process is moving along with the 2019 NFL Scouting Combine concluded, so my Big Board has expanded from 50 prospects to 100 prospects. Starting on Monday, I will start releasing full scouting reports that will lead us into April’s draft. And as previously stated, these aren’t cookie-cutter rankings in lockstep with the rest of the media. [Note: you can view my top prospects by position for an extended ranking of each group]

Following a senior season in which he exploded for 17.0 sacks, Josh Allen has arguably the highest upside of any prospect in the 2019 NFL Draft thanks to an unteachable combination of speed, bend, length, and athleticism off the edge. Besides being a terror getting after the quarterback, Allen is comfortable dropping back in coverage and has the potential to be a full-time off-ball linebacker. Allen will be close to unstoppable if he learns how to consistently disengage from blockers.

I think this draft class has two players worthy of the No. 1 overall pick, so Josh Allen being at the top of my big board is not a slight on Nick Bosa by any means. The former Ohio State star had 29.0 tackles for loss in 29 career games for the Buckeyes, and he projects as an all-around game-wrecker similar to his brother Joey Bosa. While best as a 4-3 defensive end where he can focus on rushing the passer and setting the edge, Nick should have no trouble standing up as a 3-4 outside linebacker or kicking inside in obvious passing situations. Bosa will enter the league with the polish and natural ability to immediately be a threat for double-digit sacks.

A top-end athlete with prototypical size for an interior defensive lineman, Christian Wilkins was the heartbeat of Clemson’s championship season, and he should be able to set the tone for a locker room at the next level, too. Wilkins is a scheme-versatile defender that can live in the backfield, particularly as a weakside 3-technique with the freedom to chase down the line of scrimmage, and he also has the strength to hold up at the point of attack. The two-time national champion reminds me of All-Pro Fletcher Cox.

College football’s premier eraser on the outside, Deandre Baker has the length, instincts, and experience to frustrate receivers by staying on their hip throughout the route. I think Baker’s ball skills (seven interceptions over the past three years) are even better than the numbers suggest, as a) he wasn’t thrown at often, and b) he is able to effectively mirror receivers with the sole intent of not letting them catch the ball. Baker is extremely sticky in man coverage, but he also has the traits to be an excellent zone corner.

A three-down, impact linebacker that was built for today’s NFL, Devin White has the speed and football intelligence to make plays all over the field. White led the SEC with 256 total tackles over the past two seasons, and he excels in all facets of the game, including as a blitzer and in coverage, where he can use his athleticism to get after the quarterback or match tight ends. The former LSU standout is a top-notch leader that can play off-ball linebacker in any scheme, which should make him a consensus top-ten prospect for teams.

Now fully committed to football, Kyler Murray has never-before-seen quickness at the quarterback position—and a cannon arm to go with it despite a small frame. While he could improve his overall ball placement, Murray throws with great touch/anticipation and is generally very accurate. I think the reining Heisman winner will be quicker through progressions as he gains experience at the position (just 14 starts at Oklahoma), but the innate ability is what should excite franchises targeting a quarterback early in the first round.

At six-foot-four, 342 pounds with superhuman power and great movement skills, Dexter Lawrence owned the trenches in the ACC, and there’s no reason to believe that won’t continue in the NFL. As a run defender, Lawrence consistently swallows up blockers, and he can collapse the pocket in the passing game by simply overpowering centers and guards. Lawrence will have to answer for the PED suspension that kept him out of the College Football Playoff, but overall, he’s a dominant interior defender that demands constant double teams and won’t have to leave the field on third down.

The disruptive star of Nick Saban’s defense in 2018, Quinnen Williams has quick feet, violent hands, and elite power to dominate in any role across the line of scrimmage. At the point of attack, Williams’ strength allows him to shed blockers, and his acceleration and closing speed make him a very dangerous backside defender and pass rusher in any scheme/system. I am concerned about Williams being basically invisible in the College Football Playoff, though, and he couldn’t consistently get on the field for the Crimson Tide until his final season.

A smooth, well-built wide receiver that can get open or do damage after the catch with craftiness and physicality, A.J. Brown projects to be the dominant focal-point of an NFL passing attack. Brown mostly played the slot at Ole Miss, but he undoubtedly has the all-around skillset to thrive outside, and his baseball background as an outfielder in the Padres organization allows him to track the ball at a high level. I would love to see Brown featured in an offense such as Jon Gruden’s in Oakland or Kyle Shanahan’s in San Francisco.

A pure pocket passer that has shown flashes of big-time accuracy to all levels of the field, Dwayne Haskins threw for 50 touchdowns in his lone season as the starter at Ohio State, leading them to a Rose Bowl victory. Haskins has a big arm, but throws a very catchable ball that he can layer with touch over the middle. While not a runner, Haskins has functional athleticism to extend plays in the pocket, and a sturdy frame makes him difficult to bring down. Importantly, Haskins is a clear student of the game that spends nearly two hours on the board every day.

The top offensive line prospect in this year’s class, Greg Little has all the tools to be an elite blindside protector from Day 1. The six-foot-six, 325-pound left tackle has started since his freshman campaign at Ole Miss, and he is patient, poised, and very aware in pass protection. Little keeps a solid base to hold up against power rushers and is comfortable leading the way in space, but he has room to improve as a straight-line run-blocker by playing with more of an edge as a pro.

There has been talk of Jonah Williams kicking inside to guard, but I think he can stay at left tackle as a battle-tested offensive lineman that efficiently manned the blindside—at least when Jalen Hurts was under center—for Alabama over the past two years. Williams can move people in the running game and has good hands/feet in pass protection, but whether he needs to change positions will depend on how he deals with length at the next level. Either way, teams should be getting a ten-year starter on the offensive line.

This year’s draft class has several “monster” prospects, but perhaps none have the upside that Montez Sweat does at six-foot-six, 260 pounds with 4.41 speed. The Mississippi State product is able to use his length to keep blockers from getting inside, and he’s strong enough to disengage at the point of attack. As a pass rusher, Sweat doesn’t have a ton of tools in the toolbox right now, but he can use his speed/bend to turn the corner, and also has an inside move to keep offensive tackles honest.

An impact defender from the moment he stepped on the Florida State campus, Brian Burns recorded 9.5 sacks as a true freshman for the Seminoles, and closed out his college career with Team MVP and team captain honors as a junior. Besides being a productive pass-rusher, Burns looked very comfortable in space at the Combine—so much so that teams might think about making him an off-ball linebacker that puts his hand in the dirt on obvious passing downs. Overall, Burns is a violent glider off the edge.

One of college football’s biggest mismatches over the past two years, Noah Fant has the size (six-foot-four, 249 pounds), speed (4.50 40-yard dash), and athleticism (39.5” vertical) to dominate at the next level. Fant is particularly effective in the red zone, but he can also stretch the field, create separation as a route-runner, and run away from defenders in the open field. While he can play with more physicality as both a receiver and blocker, Fant has shown enough there to feel confident about spending a top-20 pick on.

Looking at the measurables—4.58 40-yard dash and a 38.0” vertical at six-foot-four, 277 pounds—it’s easy to see why Rashan Gary’s potential is exciting for evaluators. But even though he has a scary blend of explosiveness, length, and speed, I actually view Gary as more of a three-technique that can bounce out to the five-technique at times; for the Wolverines, the former five-star recruit had just 9.5 sacks in three years, and he might not have the fluidity needed to consistently win on the edge. On the interior, Gary would be able to shoot gaps and hopefully reach his game-wrecking potential.

I don’t have the benefit of talking to prospects like scouts and general managers do, but based on the tape, Jaquan Johnson might have the highest football intelligence in this year’s class. The leader of Miami’s defense often saw the play before it happened—from identifying route combinations, to reading the quarterbacks eyes, to freelancing on a blitz to stop the run. Johnson, who is a secure tackler that seems comfortable lining up all over the field, has above-average ball skills and is a smooth overall athlete.

Those who just pay attention to the numbers instead of the on-field drills at the Combine wouldn’t have been impressed by Byron Murphy, but he bulked up 14 pounds from his time at Washington—which fits his game as an “undersized” corner that hits—and still was a clear standout for a cornerback group that struggled. Of course, what happens on the field is much more important than what happens in Indy, but Murphy can play man or zone equally well, and his pure cover skills combined with willingness as a tackler should override any concerns about size or athleticism.

A big-bodied, downfield target at over six-foot-five with a wingspan of nearly 84 inches, Hakeem Butler is being overlooked as a first-round prospect. He isn’t the natural receiver that former No. 4 overall pick A.J. Green is (not many are), but Butler has comparable size, movement skills in and out of breaks, and run-after-catch ability in a similar frame; and Butler’s one-handed highlight grabs suggest that his occasional issues catching the ball might be focus drops that can be corrected.

Seemingly built in a laboratory with superhero size and speed, D.K. Metcalf has immense upside as a receiver prospect that could eventually be uncoverable on the outside. He needs to add polish, but right now, Metcalf could probably dominate on a vertical route tree featuring mostly go’s, comebacks, and posts in the right offensive system. Metcalf—who has soft hands—can also win on jump balls (40.5” vertical) and has breakaway speed (4.33 40-yard dash) at a rocked-up six-foot-three, 228 pounds.