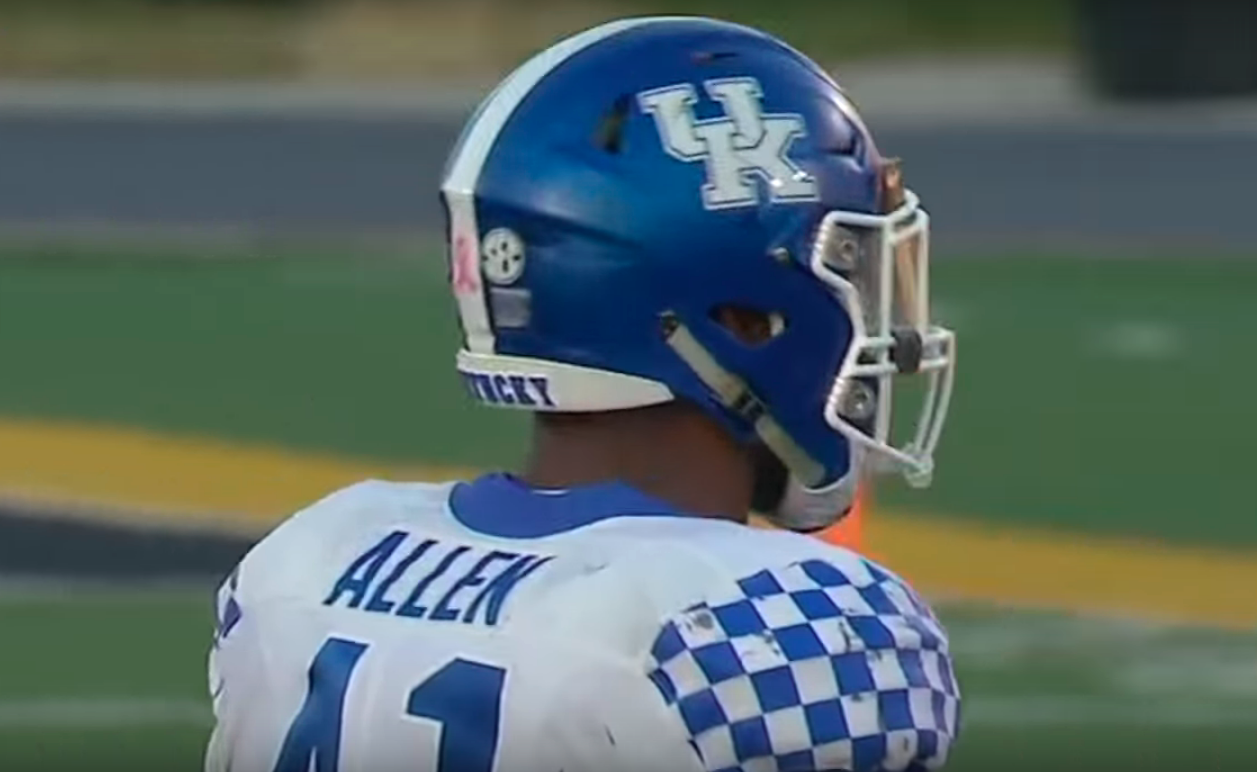 
There have been plenty of mock drafts leading up to the 2019 NFL Draft, but this mock goes over what I would do if I was the GM for each team. I’m a strong believer in best player available, but each team’s board will be different depending on scheme and personnel. Overall, this still gives a pretty good idea of what my draft rankings would look like.

I don’t think Kyler Murray is the top overall player in this year’s draft, but he’d probably be first on new Cardinals head coach Kliff Kingsbury’s board if he had one—Arizona should get the guy Kingsbury believes can perfectly run his offense, otherwise the hire is really a head-scratcher. He showed some things last year in a difficult situation, but I’m not high on Josh Rosen as a franchise quarterback, which makes the Murray choice an easy one.

While Josh Allen could excel in a 4-3 (probably at either defensive end or off-ball linebacker), Nick Bosa is a perfect fit in the Niners’ defensive scheme. The two are close enough as prospects that selecting Bosa would obviously not be a reach, and this move would allow Solomon Thomas to kick inside while Bosa and recently-acquired Dee Ford create terror off the edge.

The Jets tried to sign Vikings linebacker Anthony Barr to a long-term deal during free agency before Barr turned back on his agreement with New York and returned to Minnesota. Kentucky linebacker Josh Allen profiles similarly to Barr, and I think he’s arguably the best overall prospect in this year’s class.

Clemson defensive lineman Christian Wilkins will likely go higher than many people believe he should, so he might qualify as the “surprise” pick at No. 4 for the Raiders. He’s who I would select as an all-around player with leadership qualities and intangibles that appear to be off the charts.

I think Roquan Smith of Georgia was a slightly better prospect last year, but LSU’s Devin White is also a can’t-miss linebacker prospect worthy of a top-ten pick. White can fly around and make plays in Todd Bowles’ aggressive defense with the Buccaneers.

The Giants are in a strong spot at No. 6 overall. While they won’t get to choose from them, they are in position to get one of the five or six consensus top players in this year’s class. Here, Quinnen Williams is a guy the Giants might run the card in for. The Alabama defensive lineman has a case for being the best player in the draft.

Maybe it’s because he was out of sight during the College Football Playoff because of a PED suspension, but it feels like Dexter Lawrence isn’t getting enough love during the pre-draft process. The monstrous defensive tackle from Clemson can immediately help the Jaguars control the line of scrimmage and win on the interior.

I think Deandre Baker is just outside the top five prospects (or top six if you include Murray), but he isn’t an ideal fit for Jacksonville unless they part ways with Jalen Ramsey. The Georgia standout would give Lions head coach Matt Patricia a potential lockdown cornerback across from Darius Slay to make gameplanning easier on defense.

Florida State edge rusher Brian Burns would also be a great piece for Detroit, but Buffalo might be ecstatic to add him to the athletic defense they’re building. I believe Burns’ upside makes him a definite top-ten prospect, and he happens to be a strong fit in Sean McDermott’s defense.

The Broncos don’t have a need for an edge rusher or a wide receiver, and Dwayne Haskins is ranked close enough that I’d take him here if I were in John Elway’s position. The Ohio State gunslinger is apparently very sharp and cerebral, and he might step in as an immediate star after sitting behind Joe Flacco for a year (or a few).

If the heart condition checks out with team doctors, Mississippi State defensive end Montez Sweat offers massive upside here at No. 11 for the Bengals. Cincinnati has a nice group of rushers on the roster, but it’s not so stacked that I think they should pass up on Sweat.

My top receiver in this year’s draft is incredibly close between Hakeem Butler and A.J. Brown, but I’m giving Butler the slightest of edges. Butler’s comparisons to A.J. Green are fair, and I see some Josh Gordon after the catch for the huge Iowa State wideout. Aaron Rodgers would have a couple of monsters on the outside in Davante Adams and Butler.

The Dolphins have many holes to fill on their roster, so they certainly should not worry about filling a need with their first-round pick. A.J. Brown is my top player on the board and would be an easy choice here with Butler gone. Miami’s eventual quarterback (likely from next year’s draft class) would have a reliable and versatile target to work with in Brown.

This pick would come down to an offensive lineman like Greg Little or Jonah Williams and the top player on the board in Ole Miss wide receiver D.K. Metcalf. With Julio Jones, Calvin Ridley, and Mohamed Sanu in Atlanta’s receiving corps, the position is not close to a need for the team; but as was the case with Ridley last season, best player available is the way to go. Jones will still likely be a beast for at least a few more seasons, but Ridley and Metcalf would ensure the Falcons are set at receiver for another decade; and the raw Metcalf would be in a perfect spot to develop into a stellar receiver.

I think Duke quarterback Daniel Jones will get a lot more love from NFL teams than he does in the media. There has been some major misguided analysis in my opinion, with a lot of talk about Jones having a relatively weak arm—his exceptional deep ball is the first thing that stands out about his game to me. Jones is smart, athletic, and can run any offense (including RPO stuff), and he’d be able to sit for a year or two if he’s not immediately the best quarterback for the Redskins as a rookie.

I’m probably higher on Clelin Ferrell than most, but this is one of the easiest selections of this mock draft. The Clemson defensive end is arguably the best player remaining, and he fits a major need for the Panthers.

Either Greg Little or Jonah Williams would fit perfectly here with the Giants as arguably the top players on the board at a position of need for the team. Little might be less versatile, but he could likely immediately slide in at right tackle and eventually take over for Nate Solder on the left side.

Jonah Williams would then be able to slide into his desired position of left tackle with the Vikings, as Minnesota can move Riley Reiff to guard if the rookie is ready to man the blindside. One of the top offensive linemen in the draft would be ideal for the Vikings.

Quite honestly, I’m not sure what to think of Houston defensive lineman Ed Oliver as a prospect. He’s probably undersized as an interior defensive lineman, and comparing him to two-time Defensive Player of the Year Aaron Donald is a stretch (there simply aren’t many people like Donald). Still, Oliver could be a good value at No. 19 for the Titans.

Tight end is not a need for the Steelers with Vance McDonald in the mix, but Pittsburgh has a stacked roster and Fant is the best player left. Michigan linebacker Devin Bush would get consideration and would fill a need, as would some of the cornerbacks available; but Ben Roethlisberger would enjoy a new toy on offense after losing Antonio Brown.

They typically like to trade back, but if I was running the Seahawks, this would be a draft I would look to use the ammunition acquired from Kansas City in the Frank Clark trade to move up for one of the top pass rushers in this year’s draft. Staying at No. 21, the Seahawks can add NC State center Garrett Bradbury to beef up the interior offensive line to run the ball and protect franchise quarterback Russell Wilson.

Linebacker Devin Bush struggled against some top competition at Michigan, but he has the skill set to go mid-to-late in the first round of the draft. Hopefully the Ravens play well up front so Bush can use his speed and acceleration to run free and make plays as Baltimore looks to get over losing C.J. Mosley in free agency.

Baltimore is stacked at cornerback, and Seattle isn’t really a scheme fit, so the Texans would get a good value here with Justin Layne at pick No. 23. Houston has struggled to contain opposing wide receivers for years—particularly T.Y. Hilton in Indy—but Layne has the length and athleticism to potentially give receivers a ton of trouble on the outside.

The Raiders want a three-down back to help run Jon Gruden’s offense, and the selection of Alabama running back Josh Jacobs would likely make Coach Gruden very happy. The limited college production isn’t a huge concern in my eyes, as Jacobs might have been a 1,500-yard back if he remained in school for another year. Instead, he’ll enter the league with barely any tread on his tires.

Miami safety and turnover chain leader Jaquan Johnson is probably the most underrated player in the 2019 draft. He has the ability to become an excellent starter on the backend, and at the very least he can contribute on sub-packages immediately along with big-time special-teams contributions.

LSU cornerback Greedy Williams is still on the board, but I think Byron Murphy gets the slight edge as a prospect, and the Washington cornerback is probably a better fit with the Colts. Murphy will come up and tackle for a defense that thrives on guys playing as hard as any unit in football.

The upside is enormous, so I could see people thinking Greedy Williams should be selected higher than this. I just don’t like how many easy completions he gives up on in-breaking routes, and his on-field drills at the combine weren’t great before he left with an injury. As the third pick for Oakland in this year’s draft, they’d probably be thrilled to get him here, though.

The Chargers have a very good roster, but the offensive line could use some help. Florida’s Jawaan Taylor definitely has upside, but Ohio State offensive tackle Isaiah Prince is arguably the best right tackle in this draft. Prince shut down potential first-round Michigan edge rushers Rashan Gary and Chase Winovich for the Buckeyes, and he can instantly start at right tackle for the Chargers.

Marquise Brown would be in consideration here, but J.J. Arcega-Whiteside gives the Seahawks a guy to win jump-balls for Russell Wilson. The Stanford star’s play style seems like it would be a perfect fit with Wilson, who has shown he’s not afraid to allow his receivers to go up and make plays.

Marquise Brown would be in consideration here, but taking two first-round wide receivers would be overkill. Instead, Iowa tight end T.J. Hockenson would deliver value as an all-around tight end that would excel as a receiver while playing with Aaron Rodgers and will help open lanes for Green Bay’s running backs.

The Rams could use some help on the defensive line with Nndamukong Suh gone, and Dre’Mont Jones would be a nice fit in Wade Phillips’ defense; but Julian Love is probably a better value at No. 31. The Notre Dame cornerback could push for playing time as a rookie and potentially take over for Marcus Peters or Aqib Talib in 2020.

Marquise Brown would also be an option here, but I’d get one of these closely-rated cornerbacks to conclude Round 1. The Patriots have a very good cornerback group, so Rock-Ya Sin can develop and eventually become a stud on the outside for Bill Belichick’s defense.