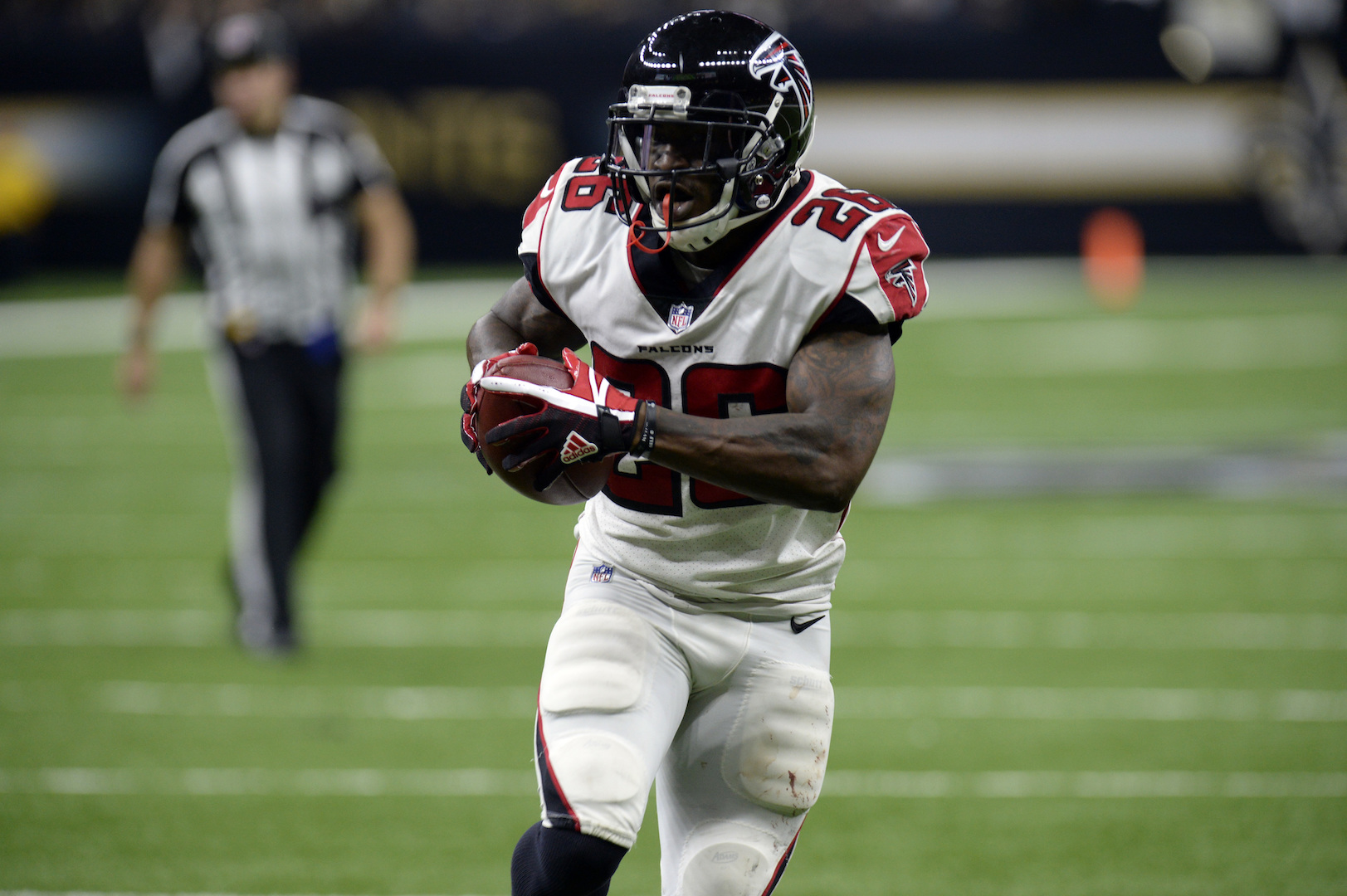 
The 2019 NFL offseason blueprints continue with the NFC South. If you missed them:

In 2018, there was a lot of talk from the Falcons that they would like to bring back Tevin Coleman after his contract expires, but now it sounds like that might not happen. While Ito Smith showed flashes as a rookie last season, which probably gives Atlanta confidence they can move on from Coleman, I think Coleman is the best running back on the roster. Devonta Freeman plays the game extremely hard, but he has more tread on the tires—I’d try to trade him and roll with Coleman, who is an extremely explosive player and had 800 rushing yards on just 167 carries last season, as the starter moving forward. As has been displayed since 2016, the Indiana product is a versatile option that can split out at receiver and use his great speed to create mismatches for Matt Ryan and the Atlanta offense.

Add competition and get deeper

Overall, the Falcons have a strong roster, but they were hit as hard as anyone by injuries in 2018, which led to their subpar season. Dan Quinn’s squad must add competition almost everywhere; starters will perform well and keep their jobs or they’ll get beat out—either way, the competition should lead to everyone being sharper on Sundays, and more depth will be created in the process.

The Falcons slightly restructured Julio Jones’ contract last season to avoid a holdout, and now it’s time to reward the All-Pro after he had yet another outstanding season. Jones became the first player in league history with 1,400 receiving yards in five consecutive seasons, and in my opinion, he was again clearly the best receiver in football. It’s not like Jones is a troublemaker; he’s a hard worker that doesn’t complain if the ball doesn’t come his way. He’ll be worth every penny of a new contract.

Cam Newton underwent another shoulder surgery in January, and hopefully the throwing shoulder issues will be behind him now. The Panthers should not rush their former league MVP—and perhaps the biggest key will be preventing Newton himself from pushing things too much. A lost season for Newton entering his 30-year-old campaign would be a tough blow to Carolina, so all parties should be willing to accept if he has to miss a few weeks to open the season if that means getting to 100% at some point for 2019.

With Newton no lock to be under-center in Week 1, the Panthers should take advantage of one of the stronger backup free-agent quarterback groups in recent memory. I like 2018 undrafted quarterback Kyle Allen, but the team should still add another veteran that might need to make multiple starts this season. Tyrod Taylor and Ryan Fitzpatrick are among the signal-callers that would be good fits in Carolina.

Add pass rushers in the draft

Julius Peppers was still getting it done at 38 years old for the Panthers last season, and his retirement leaves a big hole at edge rusher entering the offseason. Free agency lost several potential options because of players getting franchise tagged, but the draft is deep at both outside and interior rushers. Carolina should stick with their board, but ideally, they’ll come away with one or two pass rushers in the first three rounds after they finished 27th in sacks last season.

Get over the NFC Championship loss

I understand the Saints were angry with the missed pass-interference call at the end of the NFC title game against the Rams, but they must get over it. New Orleans can use it as motivation, but it’s not something they should dwell on and feel sorry for themselves about. Drew Brees did a great job of setting the tone for what the team’s mindset should be for 2019 and beyond.

Mark Ingram is one of the most intriguing potential free agents, as he’s spent his entire career in New Orleans and has had a lot of success in a backfield combo with Alvin Kamara the last two seasons. The former Heisman Trophy winner brings an attitude to the Saints, often setting the tone with an angry running style that helps set up devastating play-action passes. Kamara can handle the load if necessary, but Ingram is an ideal complement to help both runners remain fresh into January.

One of the best moves made last year was the Saints’ acquisition of former first-round cornerback Eli Apple from the Giants. I thought Apple played very well when he got comfortable in New Orleans, and he’ll turn just 24 this August—he might’ve just needed more confidence as a very young player that was relied upon early in his career and struggled, and he appears to have that confidence now playing opposite fellow former Buckeye Marshon Lattimore.

Bruce Arians sounds all-in on Jameis Winston as his quarterback, at least for 2019, but I’d explore signing Nick Foles. Arians might be able to get the turnovers out of Winston, but it’s a tough ask at this point. Meanwhile, Foles joining an offense that includes Mike Evans, Chris Godwin, DeSean Jackson, O.J. Howard, and Cameron Brate behind a solid offensive line could be scary for the rest of the division after seeing what the Super Bowl MVP did while giving his weapons opportunities to make plays in Philadelphia.

Acquire your starting running back

Tampa Bay shouldn’t give up on second-round running back Ronald Jones after one season, and Peyton Barber played well as the starter in 2018, but the team is likely to target a stud workhorse like Arians had in Arizona with David Johnson. Le’Veon Bell would be pretty interesting, but that money might be better spent for multiple players on defense. The draft could be where the Bucs find their lead runner.

This doesn’t mean a bunch of players need to be added to the group, as this is more about development of younger players. The Bucs have a couple of second-round cornerbacks—Carlton Davis and M.J. Stewart—from last year along with former first-round corner Vernon Hargreaves III, and new defensive coordinator Todd Bowles specializes in the secondary. Bowles should get the most out of his corners and safeties leading up to September.