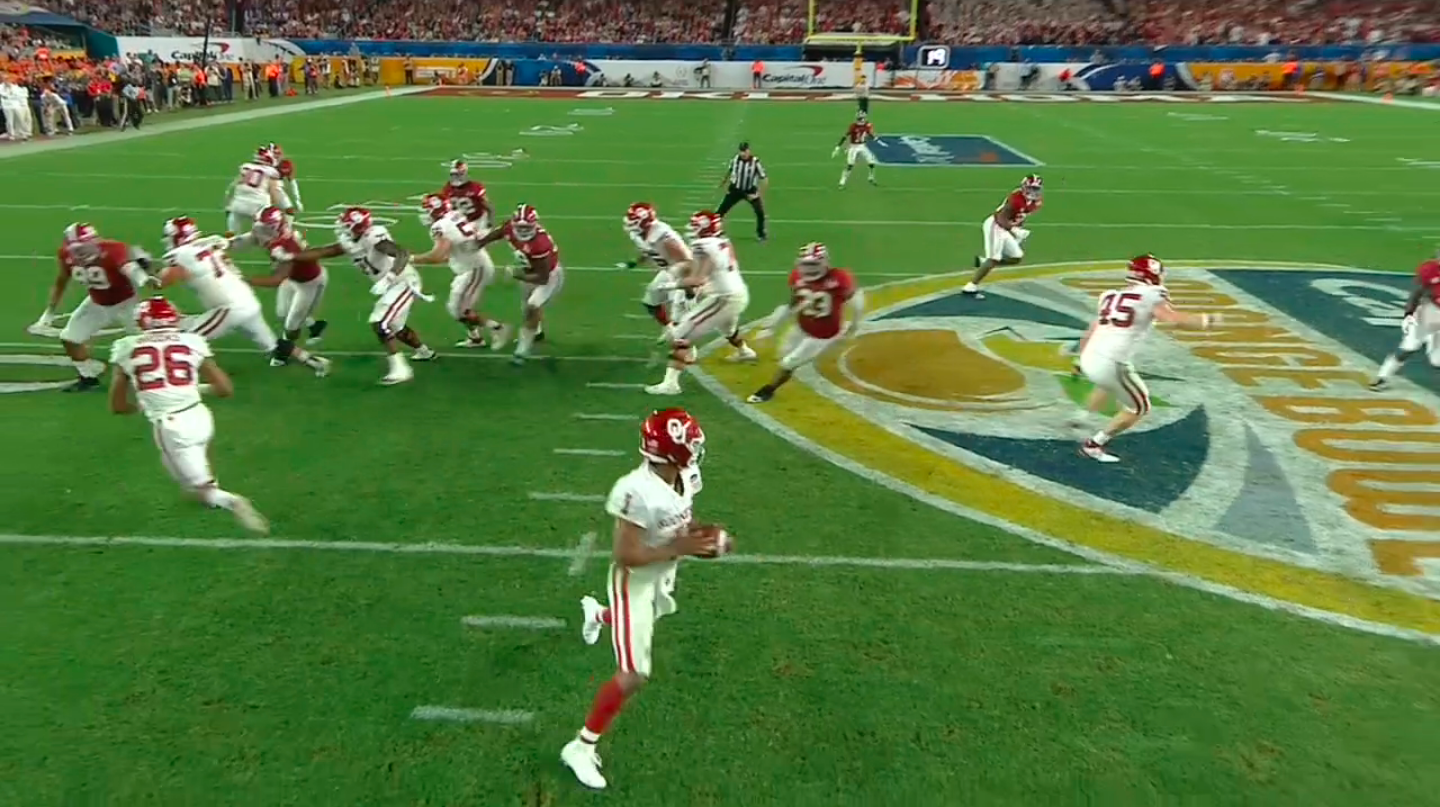 
Mock drafts are often entirely wrong, as hitting on even 20% of picks is rare considering the unpredictability of all 32 teams picking from a large pool of players. So, with three weeks until the 2019 NFL Draft, why not try something different for a mock? We’re flipping the order upside down, with the Patriots starting things off with the first pick, and the Cardinals ending the first round with No. 32.

In this totally unrealistic scenario, the Patriots would have an interesting dilemma. There are certainly exceptions (like Russell Wilson and New England’s own starting quarterback), but franchise quarterbacks typically come from the top of drafts, where the Patriots never are as perennial Super Bowl contenders. If presented the opportunity to select one first overall, Bill Belichick would probably be intrigued by Kyler Murray’s unique skill set, which can be crafted while the Heisman Trophy winner sits behind Brady. You never want to take Brady off the field, but Murray can also be used in certain packages to give defenses something else to think about.

Nick Bosa and Josh Allen might be the top two players on many draft boards, but Quinnen Williams is probably on the same tier for a lot of teams. If that’s the case for the Rams, Williams would probably be a better fit as an interior defensive lineman that can help replace Nndamukong Suh, which would allow LA to keep a great trio up front with Aaron Donald and Michael Brockers.

The Packers would be ecstatic if the 2019 first-round pick from the Saints pick they acquired in last year’s draft was actually in the top three, and they get that opportunity in this reserve mock. It would come down to Josh Allen or Nick Bosa, but the front office and coaching staff probably feels the versatile linebacker from Kentucky is a better fit in Mike Pettine’s defense.

This would be the easiest selection for a team in this imaginary reversed mock draft, as Nick Bosa is a perfect fit for Kansas City’s transition to a 4-3 defense.

While not as successful as the Patriots, the Chargers also don’t usually find themselves with a top-five selection to pick a quarterback of the future. Linebacker Devin White would probably be in strong consideration, but the Chargers can secure the heir apparent to Philip Rivers here.

If Nick Bosa, Josh Allen, and Quinnen Williams go with the first three picks later this month—which would mean the Cardinals passing up on Kyler Murray and no team trading up into the top-three for the Oklahoma quarterback—this could be the guy Oakland ends up with for real. Devin White can lead a Raiders defense looking to become a force.

The Colts and GM Chris Ballard like to go best player available, and in this case that player fills one of the team’s bigger needs while also fitting like a puzzle piece in the culture Indy is establishing. After the trade with the Jets last year, the Colts have the draft capital to move up for a player like Wilkins in the real draft.

Jason Peters is giving it another go in 2019, but he’s missed a good amount of time over the years, including having to leave games early. Jonah Williams would be a perfect backup left tackle that could eventually take over whenever Peters retires, and he could fill in at left guard if called upon in the meantime.

If Deandre Baker is available at pick No. 24 or No. 27 in three weeks, this is a selection that might really happen for the Raiders. GM Mike Mayock wants to continue to revamp Oakland’s defense, and Baker would give them a potential lockdown corner on the outside. Paired with Lamarcus Joyner playing the nickel, the Raiders could shut down an entire side of the field defensively.

The Texans hit the tight-end spot a couple of times in last year’s draft, but Noah Fant could be too intriguing of a prospect to pass up if they feel he’s the best player available. The big Iowa tight end would help stretch the middle of the field and would provide another key target in the red zone for Deshaun Watson.

Ravens GM Eric DeCosta says the team must take chances at wide receiver, so they are among the better bets to select one with a high pick in the draft. In this reverse mock scenario, the ultra-talented D.K. Metcalf is available outside the top ten, and he’s among the better high-upside prospects to take a big swing at.

The Seahawks are about drafting and developing talent, and Rashan Gary should fit that mold perfectly as a very talented player that’s probably still a little raw. It’s unlikely Gary is there for Seattle’s pick in real life, but he’d be a good fit in their defense.

Here in the teens, these are some picks that have are relatively realistic in the inverse slots for the real NFL draft. The Steelers aren’t going to want their receiving corps to struggle after dealing All-Pro Antonio Brown to the Raiders, so they’ll likely be in the market for one of the first-round prospects. Hakeem Butler is a Baltimore kid that’d be playing for the Ravens’ big rival.

Similar to the actual 2019 draft order, it was difficult to find a fit for Montez Sweat—the Chiefs would’ve been an option if Bosa wasn’t there, and the Raiders would likely be interested. Here, the Titans scoop up the freakish defensive end to give them more juice and a couple of potential franchise bookend rushers between him and Harold Landry.

Riley Reiff could be moved to guard in this scenario, which would mean an upgrade to two different spots as the Vikings look to better protect Kirk Cousins. Greg Little is arguably the best left tackle in the draft.

The Giants might prefer Hakeem Butler or D.K. Metcalf for a receiving corps that is on the shorter side with Golden Tate and Sterling Shepard, but A.J. Brown plays up to and above his six-foot-one size. Brown would give Pat Shurmur another physical playmaker to build the offense around.

Clelin Ferrell would remain in the Carolinas and fill a major need for the Panthers if this happens, and it’s a realistic scenario with Ron Rivera’s squad right in middle of the first round of the draft.

The Redskins are three spots higher in the real NFL draft, so this is another realistic pick that could happen in three Thursdays. Jay Gruden’s brother Jon got an up-close look at Drew Lock during the Senior Bowl, and the Raiders head coach spoke highly of the Mizzou quarterback, so Jay might’ve gotten some extra insight.

Brian Burns to the Falcons is yet another realistic scenario for the real draft, as the versatile EDGE from Florida State is a good fit for Dan Quinn’s defense. I had a run on wide receivers in this mock, but Burns might go a lot higher than pick No. 19.

Considered a top-five prospect by many, there’s a chance Ed Oliver is selected much higher than this, too—the Dolphins might end up with him at No. 13 if he really slips out of the top ten. It’s just difficult to gauge which teams might be concerned with Oliver’s size, even if those concerns are misguided.

Green Bay has done a good job of adding players to the edge of the defense, but they could use more talent up the middle, including at inside linebacker. Devin Bush might not be in the range for either of their first-round picks in the real draft, but it’d be a fit here.

The Bengals have tried to address offensive tackle the last few years, but the right tackle spot in particular isn’t fully solidified with a franchise player. Florida right tackle Jawaan Taylor could be that guy, and it’s possible they end up with him at pick No. 11 on April 25.

The Broncos have had strong stretches of defending the run the past couple of years, but it hasn’t been consistent enough for a defensive-minded football team. New head coach Vic Fangio is going to want to get tougher up front, so Dexter Lawrence can slide right in at nose tackle.

Former first-round corner Kevin Johnson was just signed in the offseason, but it was just a one-year deal. Levi Wallace is among the depth the Bills have at the position, but Buffalo would probably like the value of a player like Byron Murphy in the mid 20s. Murphy could slide right in and play the nickel well with Tre’Davious White and Johnson/Wallace on the outside.

The Lions didn’t make any huge additions at safety in a stacked free-agent class, but they might’ve had their eye on a strong safety draft class. Matt Patricia would probably love to have Jaquan Johnson on the back end of his defense.

Some have speculated that the Jaguars might take T.J. Hockenson with the No. 7 pick in the draft. With the order reversed, the Iowa tight end is a better fit at No. 26 than as a borderline top-five selection.

Perhaps this will be a similar selection for the Giants’ real second pick (via the Odell Beckham Jr. trade with Cleveland), which will be at No. 17 instead of down in the bottom part of the first round. The connection with Daniel Jones to Eli Manning via coach David Cutcliffe makes this feel like it’d be an easy quarterback transition for the franchise.

Greedy Williams is an ideal prospect for Buccaneers defensive coordinator Todd Bowles to get his hands on to develop in his aggressive scheme. This is probably around where the LSU cornerback will go.

This could very well be the Raiders’ pick at No. 24 or No. 27 in a few weeks, and it works out here despite the running-back-needy Buccaneers being one spot ahead of them with the order flip. Josh Jacobs is ready to contribute as a three-down back, which is exactly what Jon Gruden wants.

The Jets want to beef up their offensive line to protect Sam Darnold and open running lanes for Le’Veon Bell, and Garrett Bradbury could slide right in as a Day 1 starter at center.

While the Jets traded their second-round selection to the Colts last year, these next two selections could be the real picks at the top of the second round in 21 days. Justin Layne is a long cornerback that would push for a starting job as a rookie and could eventually take over for Richard Sherman as the San Francisco’s top corner.

This upside-down mock draft doesn’t give the Cardinals the option to select Kyler Murray, so they’d almost certainly stick with Josh Rosen. If they really do stick with Rosen, they’ll have to give him more protection across the offensive line, and Andre Dillard would immediately make a run for the starting left tackle job in Arizona.